‘Kamala, now that we have a moment to ourselves, let me offer you my own personal congratulations for a glorious victory! The victory is as much your doing.’

‘Nonsense! It belongs to all of us. In a way, it is America’s victory!’

‘You are right. We both have a chance of doing America proud!’

‘Joe! Let’s make certain of the next eight years!’

‘Donald had over 70 million Americans voting for him.’

‘That’s true. We’ve got to win them over…some at least.’

‘Joe, they voted for Donald because they thought he was tough. A man strong enough to be President of the United States!’

‘Well, I am strong enough.’

‘Of course, you are, Joe. But many don’t see it as yet. We have got to show them, everyone, that you are strong!’

‘I was thinking about it. Remember, Clinton, when his ratings were slipping, bombed that pharma unit in Sudan? And…and, Obama, flattened out Libya!’

‘No, no, no. You’ve got to do something new – something different, something exciting!’

‘Well, I dunno…I promised we would get back in with the Paris Agreement on Climate Change?’

‘Joe! That don’t mean a string of beans to anyone in the red middle of America! You have got to show You are the President of the United States of America!’

‘Joe…you could put sanctions on Pakistan to clean out that nest of terrorists? That would go down very well with my supporters in India.’

‘Can’t do that, Kamala. We want Pakis on our side to encircle Iran! Remember we lost out on their oil, tough we eliminated Dr. Mossadegh. No, think of something else.’

‘You could bomb Azerbaijan! They have got oil! And they have issues with Armenia. That will go down well not only in India but with Orthodox Christians. We need to ensure they come on board, Joe.’

‘Right, that’s a good option. Any other ideas?’

‘No, Kamala, they have been worked over by everyone. That would only make me look like a follower, not a leader. I’ve got it! That Evo Morales guy! He’s worse than any black! No…sorry! I didn’t mean it, Kamala, honest. It just slipped out, somehow.’

‘Well don’t let that sort of thing happen in public!’

‘Okay, but this Evo Morales guy has got his party voted back to power in Bolivia. We can’t have his democracy working against our democracy. I say, let’s slap him with sanctions, all we’ve got!’

‘Yes! And send in advisors to get a military coup going.’

‘Check. Any other ideas?’

‘Who? Who in tarnation is Kiribati?’

‘An independent Pacific Island country, Joe, once belonged to England. Now, in our own backyard. They have got the gumption to invite China – Red China – to open a consulate there!’

‘No, of course, not! So, you invade to clean out the Reds. Donald’s supporters will get real nostalgic, Joe. It will remind them of that epic battle there for the Tarawa atolls in World War Two. That battle was far more fierce than Iwo Jima, Joe, or Guadalcanal. You will be a hero! Americans love invasions!’

‘Yes…okay, but it might create a world-wide stink, which we don’t want right now after all of Trump’s shenanigans.’

‘Joe, we do it the usual way, as part of an international coalition – Palau, the Marshall Islands…yes, Israel, and of course the U.K.’

‘They will come in along with us?’

‘Sure thing. They can never say ‘no’ to us. Anyway, great photo-ops for them too. Imagine a Royal in battle fatigues standing on an atoll! Will keep them drooling for months!’

‘That’s what running mates are for.’ 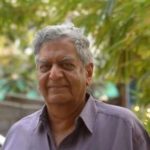 Vithal Rajan, Ph.D. [L.S.E.], worked as a mediator for the church in Belfast; as faculty at The School of Peace Studies, University of Bradford, and as Executive Director, the Right Livelihood Award Foundation. He has founded several Indian NGOs, is an Officer of the Order of Canada, and a member of the TRANSCEND Network for Peace Development Environment. vithal.rajan@gmail.com

Anticopyright: Editorials and articles originated on TMS may be freely reprinted, disseminated, translated and used as background material, provided an acknowledgement and link to the source, TMS: Kamala and Joe [Satire], is included. Thank you.