Nagorno-Karabakh: Protecting the Heritage of Humanity 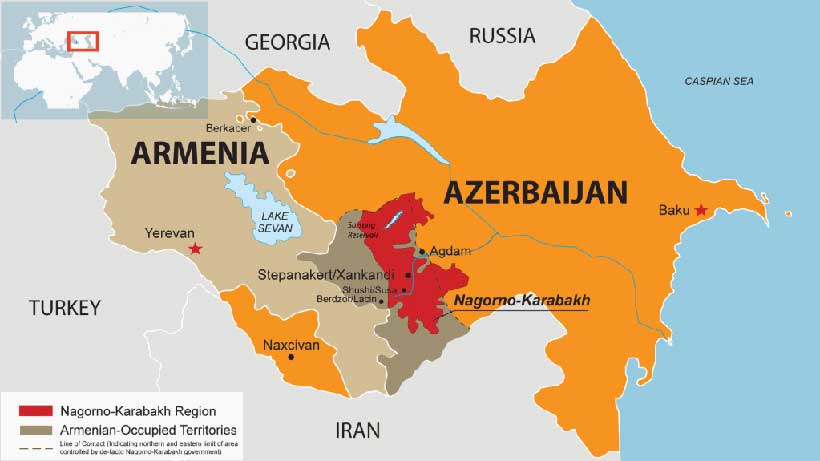 27 Nov 2020 – On 18 November 2020, the Director General of UNESCO Audrey Azoulay received representatives of Armenia and Azerbaijan to discuss the situation in and around Nagorno-Karabakh.  She reaffirmed the universal dimension of cultural heritage as a witness to history and as an indispensable element in the identity of peoples.  The international community has a duty to protect and preserve the heritage for future generations beyond the current conflict.  She recalled the provisions of the 1954 Convention for the Protection of Cultural Property in the Event of Armed Conflict to which both Azerbaijan and Armenia are parties.  She proposed sending a UNESCO field mission to draw up an inventory of significant cultural assets and to discuss how best to protect them.

Early efforts to protect cultural heritage in times of armed conflict were undertaken by Nicholas Roerich (1874-1947) Russian and world citizen. Roerich had lived through both the First World War and the Russian Revolution and had seen how conflict could destroy cultural heritage and institutions. He envisaged a universal symbol that could be placed on cultural sites and institutions the way the red cross is place on medical institutions.  He drew what he called “The Banner of Peace”, three red balls representing past, present and future.

Roerich mobilized artists and intellectuals in the 1920s for the establishment of this Banner of Peace.  Henry A. Wallace, then the US Secretary of Agriculture and later Vice-President was an admirer of Roerich and helped to have an official treaty introducing the Banner of Peace − the Roerich Peace Pact − signed at the White House on 15 April 1935 by 21 States in a Pan-American Union ceremony.  At the signing, Henry Wallace on behalf of the USA said that,

“at no time has such an ideal been more needed.  It is high time for the idealists who make the reality of tomorrow, to rally around such a symbol of international cultural unity.  It is time that we appeal to that appreciation of beauty, science, education which runs across all national boundaries to strengthen all that we hold dear in our particular governments and customs.  Its acceptance signifies the approach of a time when those who truly love their own nation will appreciate in additions the unique contributions of other nations and also do reverence to that common spiritual enterprise which draws together in one fellowship all artists, scientists, educators and truly religious of whatever faith.”

As Nicholas Roerich said in a presentation of his Pact,

“The world is striving toward peace in many ways, and everyone realizes in his heart that this constructive work is a true prophesy of the New Era.  We deplore the loss of libraries of Lou vain and Overdo and the irreplaceable beauty of the Cathedral of Rheims.  We remember the beautiful treasures of private collections which were lost during world calamities.  But we do not want to inscribe on these deeps any worlds of hatred.  Let us simply say: Destroyed by human ignorance − rebuilt by human hope.”

After the Second World War, UNESCO has continued the effort, and there have been additional conventions on the protection of cultural and educational bodies in times of armed conflicts.  The most important is the 1954 Hague Connection for the Protection of Cultural Property in the Event of Armed Conflict. UNESCO has designed a blue and white shield which is to be placed on cultural sites, but it has not received wide recognition as yet.

The protection of cultural heritage is only one of the many challenges concerning Nagorno-Karabakh, the Russian peacekeeping troops, and relations between Azerbaijan, Armenia, Turkey, and Iran.  A situation that merits watching.

Anticopyright: Editorials and articles originated on TMS may be freely reprinted, disseminated, translated and used as background material, provided an acknowledgement and link to the source, TMS: Nagorno-Karabakh: Protecting the Heritage of Humanity, is included. Thank you.

2 Responses to “Nagorno-Karabakh: Protecting the Heritage of Humanity”