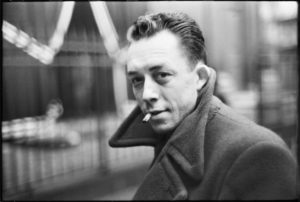 Albert Camus would be 107 y.o. had he lived beyond the car crash which took his life in 1960 as he and another editor from the Paris publishing house, Gallimard, were driving too fast from a Christmas vacation in the south of France toward Paris.  Camus, who had been the youngest writer to be awarded the Nobel Prize for Literature in 1957, had chaired the committee of support for Garry Davis’ world citizen efforts in Paris and had contributed his writing skills to the statement which Garry Davis and Robert Sarrazac read when interrupting a session of the UN General Assembly meeting in Paris in 1948 in a plea for the UN to promote world citizenship. A month later the UN General Assembly proclaimed the Universal Declaration of Human Rights which many saw as a reply to Garry Davis’ request as the Declaration sets the basis for world law directly of benefit to each individual.

Camus, in 1948, was still a highly regarded editorial writer for Combat which had begun life as a clandestine newspaper in 1941 when France was partly occupied by the Nazi troops, and half of France was under the control of the anti-democratic regime of Vichy. Although the Germans occupied Paris, they allowed publishing, theatre and films to continue if the German censors found nothing too overtly oppositional in them. Thus, Camus’ novel L’Etranger (The Stranger) was published in 1942 by the leading publisher, Gallimard.  This short novel is written in a style which owes something to the early style of Hemingway. L’Etranger is a cry of revolt against man-made standards of absolute morality — a theme he develops more fully in his political-philosophical book on the use of violence L’Homme révolté (1951) translated as

The Rebel. (2). As he said in his acceptance of the Nobel Prize in Stockholm “the nobility of our calling will always be rooted in two commitments: refusal to lie about what we know and resistance to oppression.”

Albert Camus was born in Algeria, the son of a French father killed in the First World War when he was only one and an illiterate Spanish mother who raised him while working as a cleaning woman.  Camus was intellectually stimulated by his father’s brother who read books of philosophy and was active in the local Masonic lodge.  Camus’ intelligence was spotted by a secondary school teacher who helped him get a scholarship to the University of Algiers where he studied history and philosophy, writing a master’s thesis comparing the Gnostic ideas of Plotinius and the Christian ideas of St. Augustine.

Camus was faithful to his Mediterranean roots, and his thinking is largely that of the classic Greek and Roman Stoics, the first to call themselves “citizens of the world.”

Camus is the champion of the “now” rather than the “later”. He is critical of Christian thought which he interprets as “putting up with the injustice of the now in order to be rewarded in heaven later” along the lines of the satirical song based on a Salvation Army hymn “there will be pie in the sky by and by”.  He was particularly opposed to the “Christian” policy of Franco’s Spanish government. He had been strongly influenced by the struggle of Republican Spain and the Spanish civil war writings of André Malraux.

The same refusal to sacrifice the present for a potentially better future made him a strong opponent of the Stalinist Soviet Union.  For Camus, there was no difference between dying in a Soviet camp and dying in a Nazi camp.  We should be neither executioners nor victims (the title of one of his most quoted essays). It is madness to sacrifice human lives today in the pursuit of a utopian future.

Camus is perhaps more memorable as a great journalist and an editorialist than as a novelist. He had put his reputation on the line in defense of Garry Davis, even being put in jail for a short time for having joined Davis in a street protest in front of a Paris prison where Davis was protesting the conviction of a young man who had refused military service — a man working to “satisfy the hunger for freedom and dignity which every man carries in his heart.”

As Camus expressed his world citizen ethos at the end of The Rebel “The earth remains our first and last love.  Our brothers are breathing under the same sky as we; justice is a living thing. Now is born that strange joy which helps one live and die, and which we shall never again postpone to a later time.”

Anticopyright: Editorials and articles originated on TMS may be freely reprinted, disseminated, translated and used as background material, provided an acknowledgement and link to the source, TMS: Nobel Literature Laureate Albert Camus (7 Nov 1913 – 4 Jan 1960): Stoic Humanist and World Citizen, is included. Thank you.