Loud Explosions Were Heard and F-16s Were Reportedly Spotted 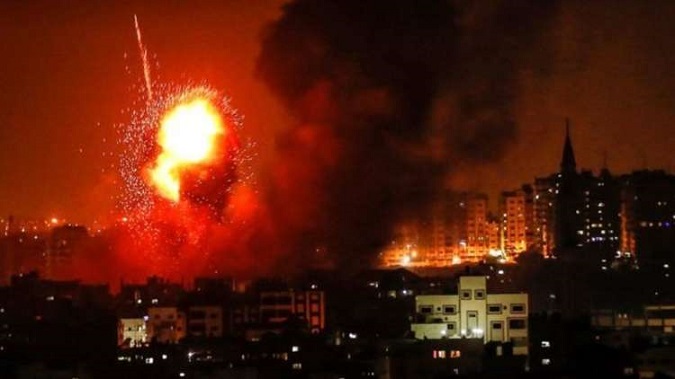 25 Dec 2020 – Israeli jets have bombarded several civilian targets in At Tuffah neighborhood today, including the Rehabilitation Center for Persons with Disabilities, Al-Dorra Hospital for Children, and Al Bureij refugee camp.

The Israeli strikes caused power cuts throughout the enclave. Material damage in civilian structures has been reported. The Israeli occupation forces has claimed it had directed the attacks at “Hamas targets” in response to alleged rockets fired from Gaza.

Meanwhile in the West Bank, this Friday dozens of Palestinians have been injured as a result of the repression by Israeli forces against the protests in the occupied territory.

Several cities throughout the West Bank have again been the scene of demonstrations against the construction of more illegal settlements by the regime in Tel Aviv. The Israeli military has brutally repressed the outraged Palestinians, using live ammunition and tear gas.

In the village of Deir Yarir, northeast of Ramallah, at least one Palestinian demonstrator has been wounded by rubber bullets and several others have suffered suffocation from tear gas thrown by Israeli uniforms, the official Palestinian news agency, WAFA, announced.

According to local witnesses, Israeli forces have prevented Palestinian ambulances from going to the site of the clashes in Deir Yarir to take the injured to a nearby hospital.

Meanwhile, dozens of Palestinians who were participating in a demonstration in the village of Beit Dajan, east of the city of Nablus, have presented respiratory difficulties as a result of Israeli repression.

All this after Israel just bombed Syria on Xmas! pic.twitter.com/kLczxB3XdM

In addition, a Palestinian, 10 years old, and another, 19 years old, have been injured in the village of Kafr Qadum, after being hit by bullets from Israeli forces. During the march, the Palestinians have called for expanding the popular resistance to the end of the occupation, as the local agency Paltoday reports.

Despite the fact that the United Nations Organization (UN) and the international community are demanding that Israel immediately end its expansionism, the Zionist regime continues with its plans to build more colonies on Palestinian lands, especially in the West Bank.

Faced with such a situation, the Palestinians regularly and peacefully protest against the regime in Tel Aviv, but Israel uses the silence of the international community to kill unarmed Palestinians in cold blood and to continue with its annexationist plans.