The Slow-motion Assassination of Julian Assange 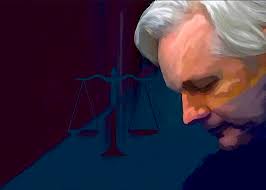 Image from Lawyers for Assange

People of Conscience Must Stop It

1 Dec 2020 – Another Iranian nuclear scientist has been assassinated. Mohsen Fakhrizadeh was killed by an elaborately planned and executed ambush. The complexity of the attack and the resources required to carry it out strongly indicate a state actor. Fingers of blame quickly pointed at a likely assassin: Israel. The United States was probably in some form of collaboration since it is widely considered that before Israel carries out such killings it informs the US.

Assassinations are nothing new to Israel or the US. The US admitted to the assassination of Iranian major general Qasem Soleimani earlier in 2020.

At the time of this writing, no one has admitted to the extra-judicial killing of Mohsen Fakhrizadeh. Usually targeted killings are carried out in the dark.

Currently, there is an attempt using the machinery of the state to try and beat down a man in the darkness of Belmarsh prison and a British kangaroo court in London. Big media, however, has marginalized coverage of the Assange case even though the outcome is bound to have an enormous impact on journalism.

Despite whatever charges Julian Assange may be accused of, it is well known that the WikiLeaks publisher was targeted for exposing the war crimes of the US government. In an upside-down Bizarro World, the screws are being ever so gradually tightened on Assange by the war criminals and their criminal accomplices. It is, in fact, a slow-motion assassination being played out before the open and closed eyes of the world.

Following the geopolitically coordinated undertaking to abrogate Assange’s asylum in the Ecuadorian embassy in London, Assange was arrested and imprisoned in Belmarsh maximum security prison for the relatively minor charge of skipping bail. [1] He continues to be held pending an extradition request from the US for violating its 1917 Espionage Act for “unlawfully obtaining and disclosing classified documents related to the national defense.”

Incarceration has been woeful for Assange in Belmarsh. The UN special rapporteur on Torture and other Cruel, Inhuman or Degrading Treatment or Punishment, Nils Melzer, has been highly critical of the treatment of Assange, describing it as “psychological torture.”

Since 2010, when Wikileaks started publishing evidence of war crimes and torture committed by US forces, we have seen a sustained and concerted effort by several States towards getting Mr. Assange extradited to the United States for prosecution, raising serious concern over the criminalisation of investigative journalism in violation of both the US Constitution and international human rights law.

Since then, there has been a relentless and unrestrained campaign of public mobbing, intimidation and defamation against Mr. Assange, not only in the United States, but also in the United Kingdom, Sweden and, more recently, Ecuador.

Melzer has called for the “collective persecution” to end.

The medical profession has also spoken out against the mistreatment of Assange. A top medical journal, The Lancet, carried the message of 117 physicians in its headline: “End torture and medical neglect of Julian Assange.”

The US extradition case against Assange was pursued during the Trump administration, but one should not expect clemency for Assange from president-elect Joe Biden. Biden has argued that Assange is “closer to being a high-tech terrorist than the Pentagon Papers.”

One brave Democrat, though, has bucked her party’s mainstream. The Hawaiian congresswoman Tulsi Gabbard introduced H.R. 8452, the Protect Brave Whistleblowers Act. Gabbard also called for the immediate dismissal of charges against Edward Snowden and Julian Assange.

Recently, circumstances have become bleaker for Assange because of a reported COVID-19 outbreak where “at least 56 people in his house block in Belmarsh prison, including staff and inmates, were found to have been infected.”

Wikileaks earlier reported that Assange, along with almost 200 other inmates of his house block, have been under lockdown since November 18.

Australia has done nothing for its citizen Assange. Australia is said to function at the behest of the US. This is so much so that Australia has put itself in a precarious economic situation with its largest trade partner, China. Furthermore, Australia has a long history of its own war criminalitythat it ignores.

What should people of conscience do? People opposed to war crimes; warring in general; persecution of publishers, journalists, and whistleblowers; and people who support freedom of the media and the right of the public to be informed should be doing what they can to bring about pardons for Julian Assange, Chelsea Manning, Edward Snowden, and other politically targeted prisoners of conscience.

Assange’s greatest “crime” was to reveal the US military establishment’s insouciance for innocent human life by releasing the video Collateral Murder.

What about those of us who claim to stand for social justice and peace? Do we not have a responsibility to do what we can to stymie the stealthy assassination of a man by the military-industrial-governmental complex for exposing its murderous nature? Bystanding is immoral and cowardly. Do something; there are simple things that anyone can do. Write letters. Sign petitions. Speak out. Saving Assange, Manning, Snowden, and others persecuted by governments is saving our humanity; it is saving ourselves.

1. For events preceding Assange’s stay in the Ecuadorian embassy see the timeline.

Kim Petersen is a former co-editor of the Dissident Voice newsletter. He can be reached at: kimohp@gmail.com.