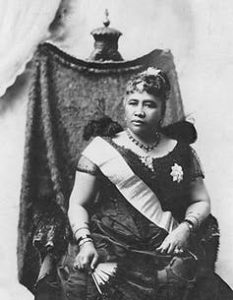 Hawaiian Flag (top); Queen Liliuokalani, last Monarch of Hawaii (bottom) – On 17 Jan 1893, Hawaii’s monarchy was overthrown when a group of businessmen and sugar planters aided by US Marines forced Queen Liliuokalani to abdicate.

“The U.S. National Lawyers Guild (NLG), with 70 chapters and over 6,000 members, calls upon the United States of America, State of Hawaii and counties in Hawaii immediately to begin to comply with international humanitarian law in its prolonged and illegal occupation of the Hawaiian Islands.”

Anticopyright: Editorials and articles originated on TMS may be freely reprinted, disseminated, translated and used as background material, provided an acknowledgement and link to the source, TMS: U.S. National Lawyers Guild Condemns U.S. Illegal Occupation of Hawaii, is included. Thank you.