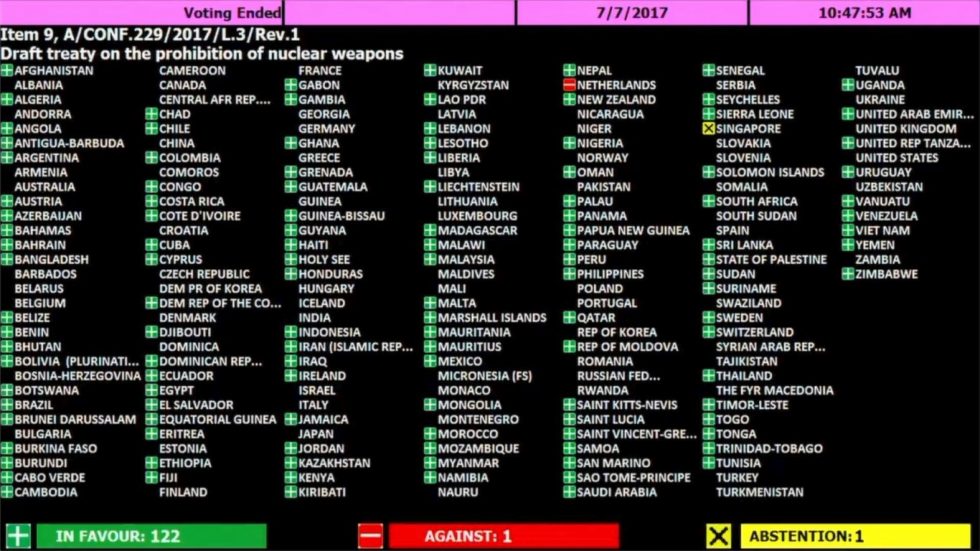 Today, 15 Jan 2021, in advance of next week’s two milestones of the entry into force of the Treaty on the Prohibition of Nuclear Weapons (TPNW) on January 22 and the 75th anniversary of UN General Assembly Resolution 1(1) two days later, the Coordinating Committee of the Abolition 2000 Global Network to Eliminate Nuclear Weapons issued a statement to welcome the new treaty into the body of international law regarding the illegality of such weapons and to remind all states of their 75-year obligation to disarm.

The statement affirms that:

“Despite the protests of nuclear weapons states, the TPNW is an important measure to support the abolition of nuclear weapons globally. Its preamble highlights the risks posed by the existence of nuclear weapons and the catastrophic humanitarian consequences that would result from their use. The states who have ratified the treaty and those who join later are affirming this understanding, demonstrating their commitment to a nuclear-weapon-free world, and accepting additional commitments to advancing this through national nuclear prohibition measures and international promotion.”

The statement highlights the work of civil society ever since 1945 when Hiroshima and Nagasaki were obliterated in a nuclear hecatomb which was entirely avoidable and undertaken for purely political purposes to establish the USA as a single global power after the end of World War II. The subsequent nuclear arms race has led to the possession of an estimated over 13,000 nuclear weapons by nine states which leaves the planet on the brink of disaster through war or accident ever since. Furthermore, the over 400 nuclear power stations strong across the face of the planet, without which nuclear weapons couldn’t be made, are disasters on the scale of Chernobyl and Fukushima waiting to happen as a result of war, natural disaster and terrorism.

“Prohibiting transit would place additional restrictions on the current deployment of nuclear weapons. And if all of these countries and all the companies and institutions that operate within them were to end investments in the nuclear weapons industry, for example, it would make an even more significant impact on the nuclear arms race.”

The TPNW’s journey from idea to legally binding treaty has been opposed every step of the way by nuclear armed states and their military allies who have boycotted negotiations, put pressure on countries that advocated for a ban, and now they deny any obligation under it, yet,

“they cannot escape their obligations to achieve nuclear disarmament. They agreed to this in the very first resolution of the United Nations, UNGA Resolution 1 (1) adopted on January 24 1946 by consensus.”

“Entry into force of the TPNW and the 75th anniversary of UNGA Resolution 1 (1) two days later provides an opportune time to remind all states of the illegality of the threat or use of nuclear weapons and of their nuclear disarmament obligations, and to call on them to implement these immediately.

“It’s time to wrap up the nuclear weapons era.”

One Response to “It’s Time to End the Nuclear Era!”