The Correct Response to Fascism Is Not Compromise: QAnon and Hate Speech Need to Be Dealt with Head-On 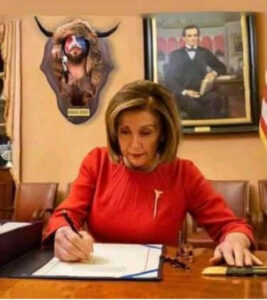 11 Jan 2021 – After the invasion of – and temporary suspension of – Congress, what is the correct response? As a peace maker, you might think I would opt for compromise, but that is not my position. A surgeon faced with a cancerous tumor does not wait until the tumor gets bigger: he cuts it out as soon as possible, and radiates the surrounding area to ensure the cancer does not grow back. QAnon is a cancer in the American body politic, and it needs to be treated like the Fascist Cancer it has become.

Gregory Stanton, founding president of Genocide Watch, explains: “QAnon’s conspiracy theory is copied from the Protocols of the Elders of Zion, a conspiracy theory promoted the Nazi party that helped Hitler come to power in Germany.

Stanton argues that QAnon is simply the Nazi cult rebranded. “Two definitions of a cult are: a relatively small group of people having religious beliefs or practices regarded by others as strange or sinister; and a misplaced or excessive admiration for a particular person or thing: a cult of personality surrounding the leaders. QAnon’s strange and sinister beliefs qualify it as a cult, as does QAnon’s misplaced admiration for Donald Trump.”

Washington Post journalists have studied the history and social media of Ashli Babbitt, the fanatical, over-hyped San Diego woman who was shot by police as she tried to break into the Speaker’s Lobby during the insurrectionist riot that took over parts of the Capitol, Ashli’s profile fits that of susceptible people who find themselves “at sea” in society, unable to cope in our overly complex and fast-moving world, and who develop feelings of alienation that suck them into a Cult like QAnon, with its lurid claims of child-trafficking paedophiles including – among others – Hillary Clinton, Hollywood stars, Jewish financiers and Democrat politicians, and even (as highlighted in the unbelievably awful ‘Left Behind’ books that have sold 50 million copies in the USA), a wicked United Nations Secretary-General with a Rumanian name who covertly helps the paedophiles and financial manipulators to rule the world. Only President Trump can bring them to justice with his secret plan that will deliver what QAnon’s disciples refer to as “The Storm” or “The Great Awakening”. 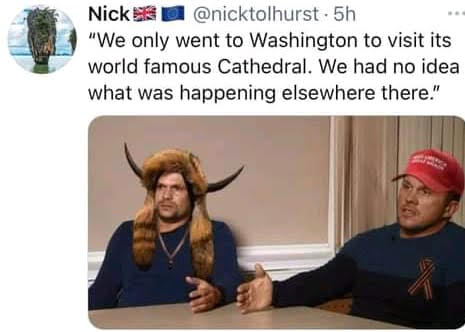 Wit is one of the medicines against extremism and excess. But wit is not a cure.

Robert Johnson, who helps moderate the Qanoncasualties site after watching a relative fall victim to the movement, warned anyone can fall down the QAnon rabbit hole.

“How fast someone can be sucked in? If they are susceptible, I’d say five days to start believing. If they have an underlying condition, they can reach mania in a week.”

The question we all have to ask ourselves is this: What do you do with a Fascist Cult?

The answer from historical experience seems to be that you need to crush the Fascism before it crushes you. You do not compromise. You do impeach Donald Trump. You do imprison all those people who invaded the Capitol, breaching and looting the Temple of American Democracy. You forcibly remove electoral gerrymandering through the creation of an Independent Electoral Commission in every U.S. State to supervise elections, electoral registration and redistricting. You clean out the Capitol Police who appear to have been complicit in the invasion of the Capitol, and nationwide you fire any other police official, sheriff or other public servant who was complicit in the attack on the Capitol. Attacks on democracy are not compatible with public service.

Then you need to identify a strategy to implement radical police reforms throughout America: not ‘defunding’ the police (which is a silly slogan), but making racism unacceptable and removing all military weapons, which are inappropriate to policing. You insist that the thousands of different and often mismanaged police forces throughout America must adopt new community policing standards in place of their bullying repressive culture. Swat teams, military equipment and repressive functions should be restricted to State Police and the National Guard.

Community policing does not mean ‘defunding’ police forces. It means that new strategies will be adopted and new priorities will be accepted by the police, working closely with community, religious, educational and other leaders. Working together will reduce stand-offs and improve the chances of people Standing Together with their local Law Enforcement officials. 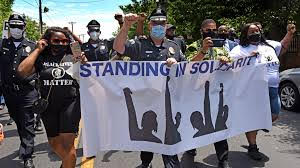 The new Attorney General must ensure that IMPARTIAL JUSTICE is offered to all the people of the United States of America. Better police standards. Better coordination with and between courts

But that is not all. The Internet needs to be regulated to promote freedom of expression without insult and abuse, without hatred and racism. Twitter, Facebook, Instagram, YouTube, Google ….. all have been guilty of propagating – and indeed encouraging – hate speech. Their banning of Donald 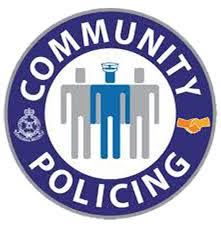 Trump AFTER the invasion of the Capitol is proof of their last-minute panic, once the Georgia Senate elections were decided in favor of the Democrats. Regulation is what keeps society safe. Corporations can never be trusted to make decisions that benefit society. They benefit only themselves.

The First law of Capitalism is: “profit myself” and not society at large.

The biggest problems on the web seem to be anonymity and impunity. If people are traceable, accountable and prosecutable for their aggressiveness – and if the hate-mongers are prosecuted – then we may be able to reduce to evils of the world wide web, return it to its primary purpose of promoting happiness. We must fight the Fascism major players have been promoting (unwittingly or knowingly). 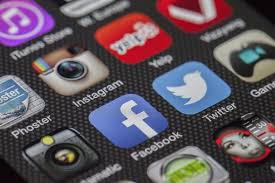 Many distinguished people have retired from public life because they no longer wish to face the threats and the insults. Civic discourse needs to be restored. Freedom of speech needs to be matched by the obligation to listen. Death threats should be unacceptable in any society:  people who make them should be forced into many hours of re-conversion therapy in an institutional setting, + many days of anger management training at their own expense, + many months of community-service.

No compromise. The Fascist Cancer needs to be vanquished.

The problem is complex and the solutions are complicated: so the sooner we start to attack the problem by outlawing hate speech and reforming those who promote it, the happier we shall be. 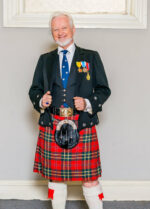 Anticopyright: Editorials and articles originated on TMS may be freely reprinted, disseminated, translated and used as background material, provided an acknowledgement and link to the source, TMS: The Correct Response to Fascism Is Not Compromise: QAnon and Hate Speech Need to Be Dealt with Head-On, is included. Thank you.