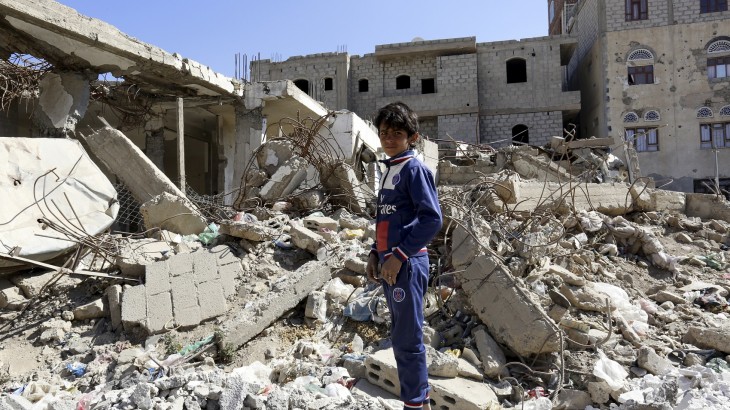 Yemen: The UN is warning that the cost of food is likely to rise by as much as 400%. International Committee of the Red Cross

14 Jan 2021 – The US designation of the Houthi movement in Yemen as a terrorist organisation is likely to lead to a famine on a scale not seen for 40 years, the UN’s most senior humanitarian official has said.

Mark Lowcock, the director general of the United Nations Office for the Coordination of Humanitarian Affairs, called for the decision to be reversed, saying the cost of food was likely to rise by as much as 400%, way beyond the reach of many aid agencies.

The US secretary of state, Mike Pompeo, designated the Houthis, also known as Ansar Allah (Supporters of God), as a foreign terrorist organisation on Sunday, causing protests among NGOs worried that this would make it impossible for them to send food and other aid into Yemen.

In a speech to be given to the UN on Thursday, Lowcock, the first UN official to call for a reversal of the US designation, predicted a disaster, saying Yemeni commercial traders were already walking away from providing food because the risk was too high.

He said: “Yemenis are crowding into markets and shops to stockpile whatever they can afford. Families are terrified that no more food or other supplies will make it into the country.”

He said Yemen imported 90% of its food, nearly all of that through commercial channels, and that aid agencies gave Yemenis vouchers or cash to buy commercially imported food in the market. “Aid agencies cannot – they simply cannot – replace the commercial import system,” he said.

Lowcock said: “The Yemeni companies who bring in most of the food are using words like ‘disaster’, ‘havoc’, and ‘unimaginable”,’ when they describe to us what they fear is coming.

“For years, these companies have been moving mountains to sustain their very risk-averse global supply chains – including the suppliers, banks, insurers and shipping lines. Some suppliers, banks, shippers and insurers are ringing up their Yemeni partners and saying they now plan to walk away from Yemen altogether. They say the risks are too high. They fear being accidentally or otherwise caught up in US regulatory action which would put them out of business or into jail.

“Some of the Yemeni traders’ suppliers, bankers, shippers and insurers are saying they are hoping they can keep going. If they can, they say, their best-case estimate is that costs could go up by 400%. That will make it too expensive for many importers to keep doing business.”

He added that the US state department’s proposed exemption system would not work: “Those licences do not yet exist. Aid agencies have no confirmed details on how they will work or what activities will be eligible. The details apparently won’t be ready until the day that the designation takes force, on 19 January.”

He emphasised that he was not seeking to challenge the intent behind Pompeo’s decision, but its impact. Progress on access for aid agencies was limited and the overall UN humanitarian appeal was underfunded, meaning millions fewer Yemenis received aid last year, he said.

Pompeo is implementing a scorched earth policy in his final days, much of it directed at Iran, in an attempt to make it difficult for the incoming administration to reach a negotiated settlement with Tehran. He is convinced that the Houthis are directed by Iran.

Lowcock ended by warning the UN that the likely humanitarian impact of the US decision would be “a large-scale famine on a scale that we have not seen for nearly 40 years. Would licences and exemptions for aid agencies prevent that? The answer is no.” He said the only solution was to reverse the decision.

Joe Biden’s nominee for national security advisor, Jake Sullivan, said on Saturday that the decision would only cause more suffering for the people of the war-torn nation.

“Huthi commanders need to be held accountable, but designating the whole organization will only inflict more suffering on Yemeni people and impede diplomacy critical to end the war,” Sullivan tweeted.

Martin Griffiths, the UN envoy for Yemen, and the UN food chief, David Beasley, echoed Lowcock, calling for the US to rethink the designation.

Griffiths said: “The decision will contribute to the prospect of famine in Yemen and should be revoked based on humanitarian grounds at the earliest opportunity.”

Patrick Wintour is diplomatic editor for the Guardian.