Brazil will, eventually, defeat this virus. Bolsonaro and his far-right government, however, may not be as lucky. 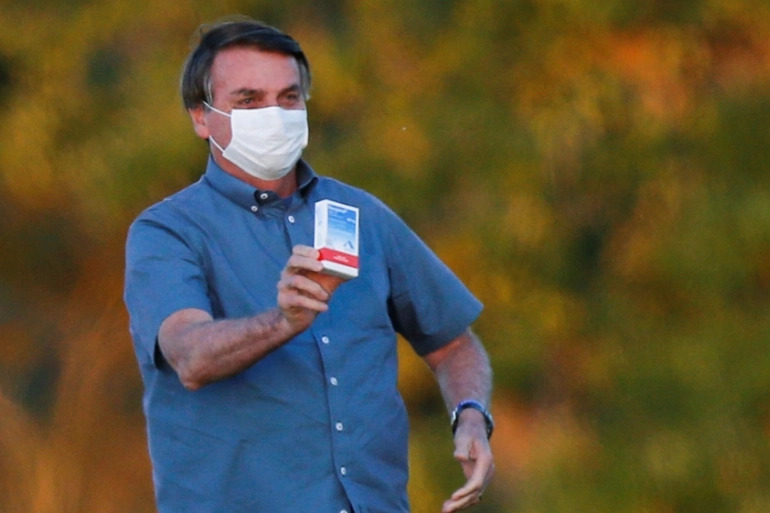 Brazil’s President Jair Bolsonaro holds a box of chloroquine outside the Alvorada Palace, amid the coronavirus outbreak in Brasilia, Brazil, July 23, 2020. [Adriano Machado/Reuters]

1 Feb 2021 – On January 17, weeks after other countries in Latin America and around the world began their mass inoculation campaigns, Brazil finally administered its first COVID-19 jab in the state of Sao Paulo using the CoronaVac vaccine developed by the Chinese biopharmaceutical company Sinovac. That first jab was one of the 6 million doses imported by the state-funded Butantan Institute in Sao Paulo, which helped develop the vaccine.

A few days later on January 23,  the federally funded Fiocruz Institute announced that it received two million ready-to-use doses of Oxford-AstraZeneca COVID-19 vaccines from India and started distributing them across the country. Since then, over one million Brazilians have been vaccinated against the deadly virus.

Nevertheless, Brazil’s national COVID-19 vaccination programme is still in its infancy and it is not clear whether the country will be able to produce or import enough vaccine doses to immunise its entire population of 210 million before the end of the year.

Brazil, of course, is not the only country in the world struggling to vaccinate its population against the deadly virus in a timely manner. Lack of resources and infrastructure, coupled with rich countries hoarding more doses than they need, left many developing nations unable to obtain enough doses to vaccinate even the most vulnerable members of their societies.

There is one thing, however, that differentiates Brazil from all the other nations that appear to be losing the vaccine race: A far-right government refusing to acknowledge the severity of the crisis and determined to hinder any effort to stem the spread of the virus.

Indeed, since the beginning of the pandemic in early 2020, Brazilian President Jair Bolsonaro and his government have done everything they can to prevent Brazil from responding to this unprecedented public health emergency efficiently.

Bolsonaro not only claimed that COVID-19 is just “a little flu” but also actively encouraged his supporters not to wear masks or practice physical distancing. He attended crowded events, shook hands and hugged people at the height of the first wave, and repeatedly ignored the scientific consensus on the best ways to defeat the virus. He pushed for anti-malaria drug Hydroxychloroquine and anti-parasitic Ivermectin to be used in the treatment of COVID-19, despite scientists around the world warning that there was no proof that either drug is effective against the disease. He sacked two health ministers in a matter of months because they refused to support the use of unproven treatments and tried to introduce simple physical distancing measures.

Beyond his efforts to downplay the severity of the crisis and spread misinformation about treatment methods, the president’s isolationist foreign policy and combative attitude towards China also hindered Brazil’s efforts to secure COVID-19 vaccines.

Bolsonaro and his supporters have long been antagonising China. Most recently, Bolsonaro’s son Eduardo Bolsonaro publicly accused the Chinese telecommunications company Huawei of “spying”, and referred to the ruling Communist Party of China as an “enemy of liberty”. Meanwhile, Bolsonaro himself repeatedly accused China of being responsible for the pandemic and said he believes the CoronaVac vaccine is “untrustworthy” because of its “origin”. All this hindered Brazil’s plans for domestic vaccine production, as the core ingredients for the two vaccines approved for use in the country – Oxford-AstraZeneca and CoronaVac – need to be imported from China.

In response to diplomatic attacks from the Bolsonaro government, however, China delayed the shipment of active vaccine ingredients to Brazil, which resulted in production being halted in both facilities.

As its diplomatic skirmishes with Beijing continue to damage its efforts to secure vaccines, the Bolsonaro government is also unable to turn to the United States for help. As Bolsonaro had a very close relationship with Republican President Donald Trump, he is now unable to approach his democratic successor, Joe Biden, to request any support with his country’s vaccine programme.

In the end, Bolsonaro’s counterproductive foreign policy stances, diplomatic failures and scientific denialism, coupled with the shocking ineptitude of his ministers, resulted in Brazil recording the second-highest official COVID-19 death toll in the world after the US and failing to implement an effective vaccination programme.

The situation got so bad in Manaus, the state capital of Amazonas, that the Brazilian air force had to deliver emergency supplies of oxygen to hospitals overwhelmed with a new surge in COVID-19 cases. Relatives of coronavirus patients, protesting outside city hospitals, said their loved ones had been taken off ventilators prematurely as oxygen ran out. Local media reported that people purchased oxygen cylinders from private companies and transported them to hospitals in their own private cars in a desperate attempt to save patients. The Venezuelan government, another target of Bolsonaro’s attacks, also sent an emergency shipment of oxygen to the state.

As the tragedy unfolding in Manaus made international headlines, a Brazilian Supreme Court justice approved an investigation into Health Minister Eduardo Pazuello’s handling of the COVID-19 pandemic in the Amazonian city. Pazuello is accused of not delivering extra oxygen to Manaus swiftly despite receiving multiple reports that hospital stocks were dwindling.

While the official investigation into Pazuello’s actions is likely to take months if not years, most Brazilians already reached the conclusion that Bolsonaro and his ministers’ conduct throughout the crisis has been nothing less than criminal.

Thousands of people have taken to the streets across the country in recent weeks, demanding that Bolsonaro be impeached over his disastrous handling of the nation’s health crisis. Sao Paulo’s governor Joao Doria, who is spearheading the state’s efforts to import and produce the CoronaVac vaccine and is expected to run against Bolsonaro in the next presidential election, openly classified Bolsonaro’s handling of the pandemic as “genocidal”. Analysts are opining in national publications that the president’s deliberate inaction in the face of this public emergency could amount to a “crime against the Brazilian people”, and he should face his own “Nuremberg trial” once the pandemic is over.

Meanwhile, a recent study conducted by the University of Sao Paulo and Conectas Human Rights, one of the most respected justice organisations in Latin America, found that the rapid spread of coronavirus in Brazil was not merely the result of the government’s “negligence and ineptitude”, but a deliberate institutional strategy. Indeed, looking at Bolsonaro’s actions in the past year, it is hard to reach any conclusion other than that he deliberately, and criminally, worked to expose Brazilians to this deadly virus.

Today, with an ever-increasing number of deputies in Brazil’s Congress supporting the call for his impeachment, Bolsonaro is finally feeling the heat. As the number of cases and deaths continues to rise, and vaccination efforts appear to go nowhere, the president is finding it harder than ever to defend his actions.

He has tried to fend off his critics with threats, mobilised his supporters on social media to attack his opponents, and accused the media of conspiring against his government. He even tried to scapegoat Pazuello for the failures of his government, implying that the health minister alone was responsible for the disastrous handling of the crisis and the delays in vaccination.

Today, Brazil is at breaking point. Bolsonaro is trying with everything he has got to hold on to power, but it is becoming harder and harder for him to hide the fact that his misguided policies and divisive rhetoric led to some 220,000 Brazilians needlessly losing their lives.

Brazil will, eventually, defeat this virus. Bolsonaro and his far-right government, however, may not be as lucky.

Raphael Tsavkko Garcia is a Brazilian journalist and researcher who holds a PhD in Human Rights from the University of Deusto.

One Response to “Brazil’s COVID-19 Catastrophe: Nothing Less Than Criminal”