Ending the Other War in Yemen

11 Feb 2021 – On February 4, in his first major foreign policy address, President Joe Biden announced “we are ending all American support for offensive operations in the war in Yemen, including relevant arms sales.” Speaking of the Saudi-led coalition that has been at war in Yemen since 2015, creating what he called “a humanitarian and strategic catastrophe,” Biden declared “This war has to end.”

Stating an intention is not fulfilling it and considering Biden’s further pledge, “to continue to support and help Saudi Arabia defend its sovereignty and its territorial integrity and its people,” his use of the word “relevant” to modify “arms sales” could indicate a convenient loophole. Still, it is refreshing to hear a U.S. president at least recognize that the Yemeni people are suffering an “unendurable devastation” and this is due to the hard work of grassroots peace activists around the world.

Whether Biden’s proclamation will mean much in the real world beyond a temporary hold on the weapons deals Trump made just before leaving office is yet to be seen. The Saudi kingdom welcomes Biden’s announcement and the U.S. arms sellers who have profited from the war seem unruffled by the news. “Look,” Raytheon Technologies CEO Greg Hayes reassured investors anticipating this move, “peace is not going to break out in the Middle East anytime soon. I think it remains an area where we’ll continue to see solid growth.” The prospects for peace in Yemen probably depend more on sustained international pressure than on a kinder and gentler administration in the White House.

The Congressional Research Service in a report updated on December 8, 2020, “Yemen: Civil War and Regional Intervention,” references a major factor in U.S. policy planning regarding Yemen that the president did not mention. Roughly five million barrels of oil passes through the Bab el-Mandeb Strait off Yemen’s western coast on a daily basis, eventually making their way to Asia, Europe, and the United States.

In case the president gave the misimpression that the U.S. was getting out of the business of killing Yemenis completely, the next day the State Department issued a clarifying statement, “Importantly, this does not apply to offensive operations against either ISIS or AQAP.” In other words, whatever happens in regard to weapons sales to the Saudis, the war that has been waged for 21 years under the guise of the Authorization for Use of Military Force passed by congress authorizing the use of the US Armed Forces against those responsible for the September 11 attacks, will continue indefinitely, despite the fact that neither ISIS nor Al Qaeda in the Arabian Peninsula existed in 2001.

The “offensive operations” in Yemen that will continue under Biden include drone (UAV) strikes, cruise missile attacks and U.S. Special Forces raids and are a part of the larger “war on terror” that began in the administration of George W. Bush and was expanded under Obama. Despite his campaign promises to end the “forever wars,” a report from Airwars suggests that Trump has bombed Yemen more times than his two predecessors combined.

In January, 2017, just days after taking office, Trump ordered Navy Seal commandos supported by Reaper drone air cover to raid a compound suspected of harboring officials of al Qaeda in the Arabian Peninsula. While the raid’s targets escaped, one Navy Seal died in the raid, and eventually it came out that 30 Yemenis were also killed, including 10 women and children. The Navy Seal was not the only US citizen killed in that raid: the other was an 8-year-old girl, Nawar Awlaki. In September, 2011, Nawar’s father, Yemeni-American imam Anwar Awlaki, was assassinated in a drone strike in Yemen that was ordered by President Obama, on secret intelligence that he was an al Qaeda operative. A few days after her father was killed, Nawar’s 16 year old Denver born brother Abdulrahman was killed in another drone strike.

Many other Yemeni families have suffered in these attacks. On January 26, 2021, relatives of at least 34 Yemenis alleged to have been killed in American military actions asked the Inter-American Commission on Human Rights, to determine whether the deaths were unlawful. The petition asserts that six drone strikes and one Special Operations raid during the Obama and Trump administrations inflicted catastrophic damage on two families.

The statistics around the U.S. war in Yemen are difficult to come by, in part because many of the attacks are carried out secretly by the CIA and not by the military, but the Airwars and other studies count the number of drone strikes and their victims conservatively in the hundreds. The casualties of Saudi led war, in contrast, are more than 100,000 dead with almost as many killed by hunger and disease caused by the Saudi blockade and millions of Yemenis being deprived of food and other needs.

While its death toll is much smaller, the U.S. drone attacks have a disproportional effect on Yemeni society. A 2014 screening study of Post-Traumatic Stress Disorder symptoms among civilians by the Alkarama Foundation found that “for a large swath of population in Yemen, living under a sky that has become a constant source of trauma is an everyday reality” and that under drone attack and surveillance, Yemen is “a precarious time and a peculiar place, where the skies are becoming traumatic and a generation is being lost to constant fear and suffering.”

If the Special Forces and air strikes are intended to defeat terrorism in Yemen as in the other countries under attack, they are having the opposite effect. As the young, late, Yemeni writer Ibrahim Mothana told Congress in 2013, “Drone strikes are causing more and more Yemenis to hate America and join radical militants. … Unfortunately, liberal voices in the United States are largely ignoring, if not condoning, civilian deaths and extrajudicial killings in Yemen.”

Mothana’s observation about liberal voices in the US “largely ignoring, if not condoning, civilian deaths and extrajudicial killings in Yemen” was affirmed in Senator Bernie Sanders’ 2016 campaign for president. While Sanders has become outspoken in his opposition to the Saudi led war, as a presidential candidate he repeatedly voiced his support of Obama’s drone wars. “All of that and more,” he replied when asked if, as president, drones and Special Forces would play a role in his counter-terror plans. Again, in the 2019 resolution “To direct the removal of United States Armed Forces from hostilities in the Republic of Yemen” offered by Sanders, passed in both houses of Congress and vetoed by Trump, U.S. participation in this other war was given a pass: “Congress hereby directs the President to remove United States Armed Forces from hostilities in or affecting the Republic of Yemen, except United States Armed Forces engaged in operations directed at al Qaeda or associated forces.”

In Biden’s foreign policy address, he left open the possibility of arms sales as he pledged his commitment “to continue to support and help Saudi Arabia defend its sovereignty and its territorial integrity and its people.” The threats Saudi Arabia faces include, he said, missile attacks and UAV (drone) strikes from weapons he says are supplied by Iran. In fact, Yemeni Houthi Ansar Allah rebels have launched drone attacks on Saudi Arabia, most notably a September 14, 2019 attack on Saudi Aramco refineries that disrupted world crude oil supplies. It is a strange irony, that after the U.S. assaults Yemen with thousands of Hellfire missiles launched from Predator drones for over 20 years, the U.S. now must arm Saudi Arabia to defend itself (and our oil supply) from Yemeni drones and missiles.

The global proliferation of weaponized drones is no surprise and Biden’s plea for peace in Yemen that allows for their continued use is a hollow one. Giving a pass, continuing  to ignore, if not condone, civilian deaths and extrajudicial killings in Yemen and elsewhere will not bring peace but will ensure that for generations to come, profiteers like Raytheon, Boeing, Lockheed Martin and General Atomics, will “continue to see solid growth.” Peace in Yemen, peace in the world, demands no less than an end to the production, trade and use of weaponized drones. 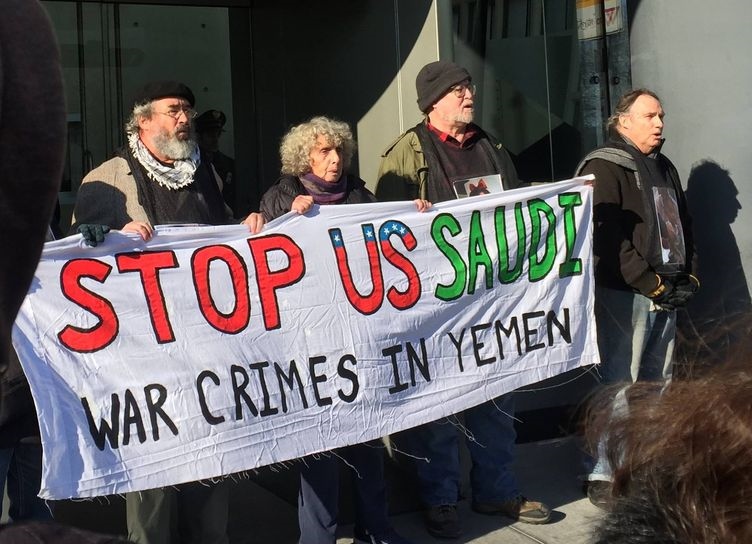 Brian Terrell at left, with Joan Pleune, Felton Davis and Bud Courtney, blocking the US Mission to the UN, December, 2017
Photo by Joanne Kennedy

Brian Terrell is an Iowa based peace activist who has spent more than six months in prison for protesting targeted assassinations at U.S. military drone bases. Contact: brian1956terrell@gmail.com

Anticopyright: Editorials and articles originated on TMS may be freely reprinted, disseminated, translated and used as background material, provided an acknowledgement and link to the source, TMS: Ending the Other War in Yemen, is included. Thank you.