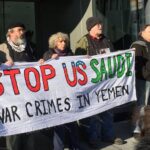 On 4 Feb President Joe Biden announced “we are ending all American support for offensive operations in the war in Yemen, including relevant arms sales.” Stating an intention is not fulfilling it and considering Biden’s further pledge, “to continue to support and help Saudi Arabia defend its sovereignty and its territorial integrity and its people,” his use of the word “relevant” to modify “arms sales” could indicate a convenient loophole.

In the final weeks of a six month prison sentence for protesting remote control murder by drones, I can only reflect on my time of captivity in light of the crimes that brought me here. In these ominous times, it is America’s officials and judges and not the anarchists who exhibit the most flagrant contempt for the rule of law.

Last April [2012], Brian Terrell was arrested for trespassing while protesting the US drone program at Whiteman Air Force Base in Missouri. He must report to a South Dakota federal prison to serve six months for the misdemeanor. Novenber 14, 2012 – I just got word from the US Bureau of Prisons via Catholic Worker-attorney Ruth O’Neill that the institution that I am to report to by 2 PM on November 30 [2012] is the prison camp at Yankton, South Dakota.