Interfaith Harmony Week: Chou Tun-yi, a Voice for Our Time 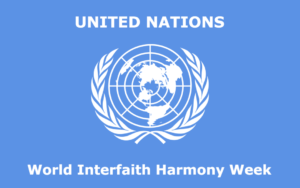 The United Nations General Assembly on 20 October 2010 proclaimed the first week of February of each year as the “World Interfaith Harmony Week” among all religions, faiths and beliefs.  The General Assembly resolution recognized “the imperative need for dialogue among the different faiths and religions in enhancing mutual understanding, harmony and cooperation among people.”  The week has a potential to promote the healing of religion-based tensions in the world.

Thus, the Association of World Citizens welcomes this effort to develop respect and mutuality among diverse cultures and religions.  Today, there is a broad and deep movement toward openness and goodwill among religious and spiritual communities. New awareness of shared ethical principles opens the way for creative engagement.

There is a need for cooperative action to bring the wisdom of religious traditions to meet the economic, environmental and social challenges that humanity faces. The ecological crisis has a spiritual dimension.  We must help humanity to develop a reverence for all life and respect for the sacredness of the Earth, our common home.

A Voice for Our Time in finding harmony is that of Chou Tun-yi (1017-1073) known as the Master of Lien-hsi.  During the Sung dynasty (960-1279), after a period of division and confusion, there was a conscious effort to bring together into harmonious framework currents of thought that existed in China but often as separate and sometimes hostile schools of thought: Confucianism, Buddhism, philosophical Taoism, and religious Taoism.  These efforts were called Tao hsuch –the study of Tao.

Chou Tun-yi was a leading figure in this effort.  He developed a philosophy based on the harmony of Yin and Yang, a harmony known through intuition as each person has within himself the capacity to know what is right.  This capacity of intuition, what Chou Tun-yi called “straightforwardness in movement”, properly developed, will lead to impartiality  and universality, the Confucian ideal of Sagehood. (1)

Today, the currents of thought linked to Christianity and Islam needed to be added to the currents of Confucianism, Buddhism and Taoism.  However, the need to develop the capacity of properly using intuition remains a vital approach – a goal for Harmony Week.

Anticopyright: Editorials and articles originated on TMS may be freely reprinted, disseminated, translated and used as background material, provided an acknowledgement and link to the source, TMS: Interfaith Harmony Week: Chou Tun-yi, a Voice for Our Time, is included. Thank you.