Myanmar Military and Its Coup

With tanks, armored vehicles on streets, military sends message to public: ‘we are still here as arbiters of democracy’. 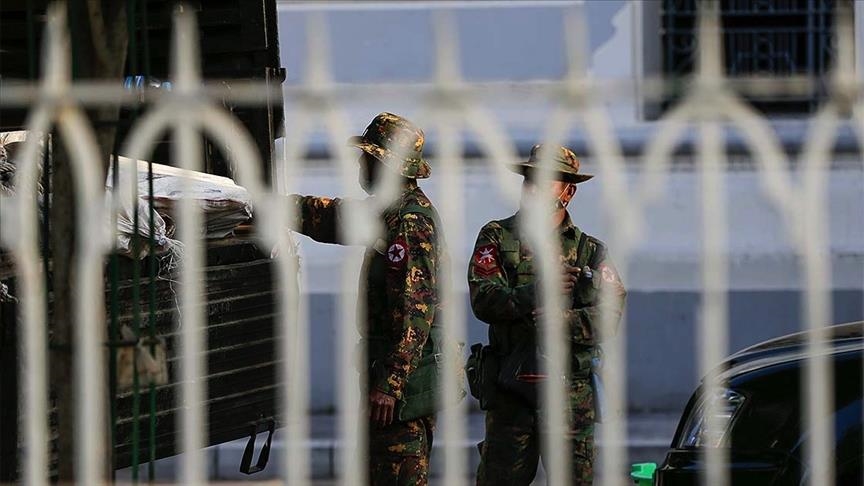 The military also declared that it has taken control of the country for one year under a state of emergency.

Last week, a flurry of speculation about the likelihood of a military coup against Aung San Suu Kyi’s civilian government in the capital city Naypyidaw intensified. Tanks and armored vehicles were moving about in Yangon, Mandalay and other cities in full view of the public, while there were reports of the increased presence of security troops in Naypyidaw and pro-military street protests.

These developments triggered the release of alarmist statements from various quarters including the US, Australia, the EU and the Office of the UN Secretary-General, as well as Myanmar’s official governing board of Sangha or Buddhist Order.

On Jan. 28, the UN Secretary General’s spokesperson Stephane Dujarric issued a statement attributable to Antonio Guterres urging “all [Myanmar] actors to desist from any form of incitement or provocation, demonstrate leadership, adhere to democratic norms and respect the outcome of the Nov. 8 general election. All electoral disputes should be resolved through the established legal mechanisms.”

The following day, the 14-monk Myanmar Governing Board overseeing the country’s half a million Buddhist monks and nuns held a virtual meeting and issued “a statement of the appeal” to resolve any disputes arising from the November election peacefully and in accordance with the existing laws and regulations of the land.

On Saturday morning, amid local anxieties and statements of concern about the speculated coup against the Aung San Suu Kyi government, the Office of the Commander-in-Chief Min Aung Hlaing issued a bilingual Burmese and English statement of clarification. The statement dismissed the coup speculations and blamed unscrupulous organizations for distorting the senior general’s video conference addressed to the National Defense College class on Jan. 27. In it, Min Aung Hlaing reportedly attributed the National League for Democracy’s (NLD) crushing defeat of the military-backed Union Solidarity and Development Party (USDP) to the widespread electoral fraud of 8 million irregular votes and floated the idea of abolishing the 2008 Constitution.

“The election laws and regulations are violated [by the re-elected NLD party and its Myanmar Electoral Commission],” he stated.

The same morning, echoing the statement from the Office of the Commander-in-Chief, the military’s mouthpiece Myawaddy News drew a parallel between past election frauds, corruption and political violence which it (the military) attributed to civilian political parties, particularly the Anti-Fascist People’s Freedom League, or AFPFL. Co-founded by Ms. Suu Kyi’s father the late Aung San as a revolutionary front against Japanese fascist occupation during WWII and subsequently the mass political movement against the returning British colonial administration, the AFPFL was the equivalent of today’s NLD in that it had near-total dominance in the parliamentary system.

The Commander-in-Chief’s statement portrayed the military and its leaders as honest, corruption-free, above-the-fray patriotic guardians of the Union of Burma (or today Myanmar), in sharp contrast to the selfish, greedy, corrupt politicians and their parties of the post-independence parliamentary era in the 1950s and 1960s, the era that came to a crushing and abrupt end with the 1962 coup.

Following the Nov. 8 elections, there has been a running dispute between the Myanmar Election Commission which was set up by and answers to Suu Kyi’s puppet nominal President Win Myint and the military-backed USDP, made up largely of ex-generals and other ranks, as well as the military-bred and associates.

Myanmar voters went to the polls on Nov. 8. They gave Suu Kyi and the NLD the most decisive re-election mandate in the country’s post-independence history.

The NLD’s clear victory in effect crushed the military-proxy USDP: out of 476 seats in the Parliament, the ex-generals secured only 33 seats, while the NLD took 396.

Apparently, this gave the NLD near-total control over the legislature, something which the military now says is one-party anti-democratic rule contrary to the spirit and aims of the military framers of the 2008 Constitution. But this is Orwellian and opportunistic because the Burmese military leaders never internalized democratic values nor worked to build any system that is worthy of the term democracy.

Here one can see a Trumpian parallel between the overwhelming majority of US President Donald Trump’s grassroots supporters and 70% of his backers in US Congress and the ways in which Myanmar military men, in-service or veterans, see themselves vis-à-vis the respective election winners – Biden and his voters and the NLD and its nationwide supporters.

Despite the verified and verifiably free, transparent and fair elections in the US and Myanmar in 2020, both Trump (and Republicans) and the Burmese military-backed USDP party succumb to the false view that they were the injured party which lost the election only because of the other side’s widespread alleged voter fraud. But this is where the parallel ends.

Unlike the US, Myanmar’s democratic transition and democracy are at best fragile and at worse a total farce. This is in addition to belaboring the obvious – that the US has 200+ years of continuously expanding, if at times turbulent democratic culture and a political system of checks and balances.

Six years ago, the world succumbed to political euphoria – nothing short of extraordinary madness around Myanmar’s election outcome. It prematurely – and without any empirical justifications – celebrated “the victory lap” of Suu Kyi as her party was swept into a landslide victory over the generals’ USDP, with Suu Kyi herself having been crowned “Myanmar State Counsellor,” the “above-the-president” political office from which she has been playing the puppet-master to her yo-yo presidents, first Htin Kyaw and later Win Myint.

Against this tide of extraordinary delusions of global and Burmese elites and hysteria of the masses, I argued that the ultimate winners of the 2015 election landslide were the Burmese generals. For the country’s military leaders, who run the most powerful institution, were never compelled, either from below domestically or from western powers who backed Suu Kyi, to make any real concessions. They were practically given a free pass in exchange for strategic and economic access to the country while the West and the rest were trumpeting a “Myanmar Spring.”

This was how the farce of Myanmar’s democracy gained international legitimacy and in-country acceptance. The Constitution that pre-emptively legalizes any future military coup is the basis of what is billed as “fragile democracy.” The inconvenient fact is Burmese generals, young or old, retired or in-service, have never felt compelled to give up their effective control over levers of the state, in any way, shape or form.

In 2008, the generals created and adopted the Constitution of, for and by the military as the real-power-holders. It was designed specifically to enable the military to control all crucial levers of power such as the security ministries of Home, Border Affairs and Defense, the veto power – via its 25% bloc of unelected but allotted MP seats – over any significant constitutional amendments that will tip the balance of power in favor of We the People, the firm grip on the amendments General Administration Department which exercise state’s administrative control over populations down to the smallest hamlets and neighborhood wards and exclusive control of a large share of the national economy via its economic conglomerates.

Besides, Suu Kyi, the most trusted Burmese politician, will never be allowed to assume the country’s presidency under the military’s Constitution.

In light of the military’s primacy and dominance in the country’s reform process, I was as perplexed as anyone upon seeing the images of the tanks on the streets of my hometown of Mandalay and former capital Yangon and reading the news of Commander-in-Chief Min Aung Hlaing blatantly floating the possibility of the abolition of the 2008 Constitution – the military’s proverbial Golden Swan which lays an egg a day without fail – and the military spokesperson Brigadier Zin Min Htun effectively fueling the popular speculation that the tanks on the streets are sure-fire signals of the coming coup.

Three decades ago, the San Francisco Chronicle (16 May 1990) carried a 734-word news analysis entitled “Vote will change nothing: Military Pledges to Retain Power after May 27 Exercise” by James Goldstein where the astute American journalist wrote: “If you ever needed proof that elections do not by themselves ensure that a government is protecting the human rights of its citizens, Burma is it.” Indeed, the vote has changed nothing fundamental in terms of the power equation in Myanmar.

It is way past time the UN, the EU, the US and the global media shed their mainstreamed farcical tales about Myanmar’s “fragile democratic transition” under Nobel laureate Aung San Suu Kyi. Painfully, Suu Kyi has shown her true colors as a racist Rohingya genocide-defending autocrat while her partners-in-crimes, the Burmese generals, just paraded their tanks. The military’s message to the overwhelmingly pro-NLD public is loud and clear: the military remains the real boss, despite the trappings and spins of democracy.