The 4 February 2021 verdict of guilty against Dominic Ongwen by the International Criminal Court in the Hague highlights what Olara Otunnu, the then Special Representative on children in armed conflict of the U.N. Secretary-General, has written

“At the heart of this growing phenomenon of mass violence and social disintegration is a crisis of values. Perhaps the most fundamental loss a society can suffer is the collapse of its own value system. Many societies exposed to protracted conflicts have seen their community values radically undermined if not shattered altogether. This has given rise to an ‘ethical vacuum’ a setting in which international standards are ignored with impunity and where local value systems have lost their way.

“Children represent the future of human civilization and the future of every society. To permit them to be used as pawns in warfare, whether as targets or perpetrators, is to cast a shadow on the future. From generation to generation, violence begets violence as the abused grow up to become abusers. Children who are thus violated carry the scars of fear and hatred in their hearts and minds. Forced to learn to kill instead of pursuing education, the children of conflict lack the knowledge and skills needed to build their futures and the futures of their communities. For a society, the lives destroyed and the opportunities lost could have a devastating effect on its long-term stability and development.”

At the age of 9, Dominic Ongwen was captured by the militia of the Lord’s Resistance Army in northern Uganda and became a “child soldier”. The Lord’s Resistance Army is a continuation of the Holy Spirit Mobile Force created in 1986 around Alice Auna Lakwena, a woman healer who combined Christian Pentecostal elements, especially the direct intervention of the Holy Spirit, with more traditional African beliefs in charms that can prevent being wounded. In November 1987, Alice Lakwena left Uganda for Kenya, but the movement transformed itself under a cousin of Lakwena, Joseph Kony. He renamed it the Lord’s Resistance Army. Kony also believes that he is in direct contact with the Holy Spirit and considers himself as a medium – “God can confirm that I am an embodiment and the personification of the Holy Spirit”. He also couples Christian aspects with African traditions. As the insurgency is “God-guided” it is difficult to find compromises on the human level. 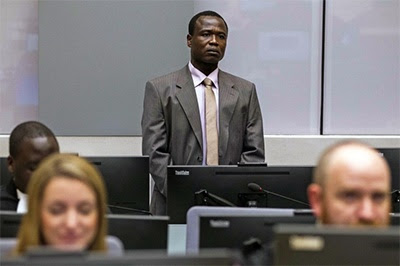 As Dominic Ongwen grew older, he was no longer a “child soldier” but took on increasing responsibilities for leading raids of the Lord’s Resistance Army through the Acholi tribal area of northern Uganda and across the frontiers into Sudan and the Democratic Republic of Congo. The trial highlighted abuses during 2003 and 2004, but they had begun before and continued afterwards. It is estimated that some 100,000 persons have been killed in the struggle and some 60,000 persons kidnapped. Joseph Kony has left Uganda and is thought to be living either in the Sudan or the Congo. Atrocities committed by the Lord’s Resistance Army against unarmed civilians and their unwillingness to accept alternative political views have prolonged the armed conflict.

Another factor perpetuating the conflict has been that the conflict has become a lucrative source and cover for clandestine income for high-raking government military and civil officials and other profiteers. It must be noted that the actions of the government forces in their fight against the Lord’s Resistance Army have also violated many of the laws of war. However, Uganda President Yoweri Museveni insisted that if there was to be cooperation with the International Criminal Court for the trial of Dominic Ongwen only the crimes of the Lord’s Resistance Army should be considered. Thus there were 179 witnesses who testified against Ongwen. The sentence should be pronounced in a couple of months. The whole story of the Acholi-area conflicts is yet to be written.

Anticopyright: Editorials and articles originated on TMS may be freely reprinted, disseminated, translated and used as background material, provided an acknowledgement and link to the source, TMS: Protracted Conflict, Elusive Justice: The International Criminal Court Trial of Dominic Ongwen, is included. Thank you.