The Mars Rover and the Texas Catastrophe: Scientific Possibility vs. Capitalist Reality

20 Feb 2021 – The successful landing of the Perseverance rover on the surface of Mars is a scientific and technological achievement of the highest order. Eight years of meticulous planning—involving thousands of people spanning multiple countries across three continents—were spent to gently place the 1,025-kilogram astrobiological explorer on the surface of another world.

Perseverance is the latest in a series of orbiters, landers and rovers that have studied a planet that has long fascinated humans. As all the past missions have shown, the Martian surface is a dry, cold, arid place. Yet for all its current hostility to known life, it can feel very familiar. It has dunes, storms, ice caps, mountains, dried-up streams, rivers and lake beds. There are even quite spectacular sunsets, the shades of blue seen on Mars contrasting beautifully with the reds and yellows seen on Earth. 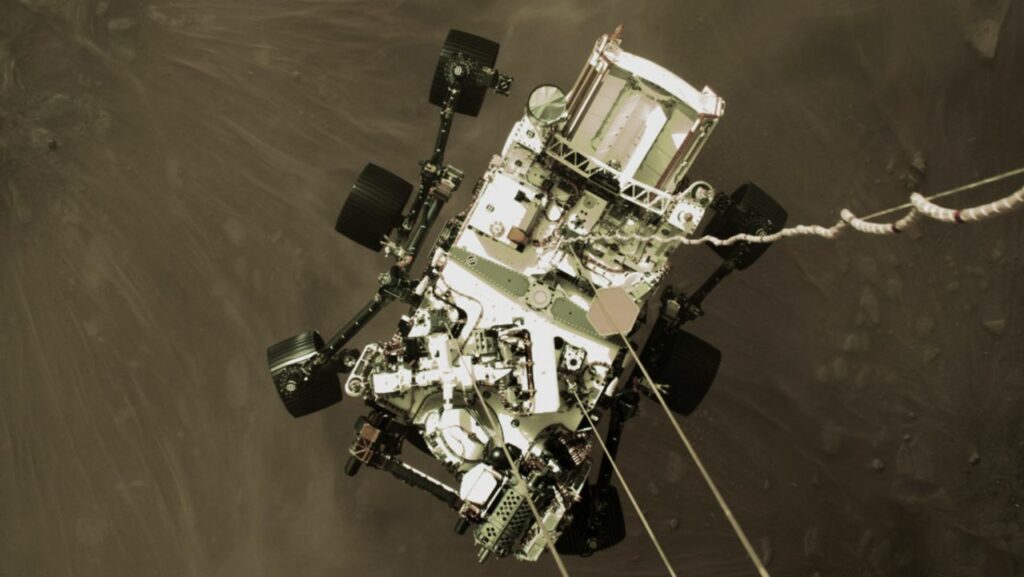 Perseverance imaged by its rocket pack while being lowered to the surface of Mars, about two meters above touch down. Plumes on the side of the rover can also be seen, dust kicked up by the rockets. This is the first ever image from a landing as it was happening, and many more are expected to be released in the coming weeks, along with audio of the entire entry, descent and landing sequence. Credit: NASA/JPL/Mars 2020

After a 203-day journey, the seven advanced instruments on board the rover have already begun to transmit data and images back home. While the first photos taken by Perseverance are primarily used as part of the process to ensure the rover is functioning as it should, one image of its front left wheel reveals porous rocks. On Earth, such formations are caused either by volcanoes, which means they will provide insight into Mars’ geological history, or through sediment deposits in rivers and oceans, which means the rocks might have been formed by ancient water that was once on the red planet.

A great deal was also learned through just the landing itself. NASA proved for the second time (the first being the Curiosity landing) that it is possible to land a rover by gently lowering the vehicle to the Martian landscape via skycrane, an enormously complex and risky maneuver, but one which is necessary to bring so many cameras, analyzers and other tools to study the alien world. The upgraded navigational cameras and software used to guide the rover to its landing site were able to autonomously steer clear of boulders, slopes and cliffs that dot Jezero Crater, while placing Perseverance very close to many of these scientifically interesting features.

Further investigations are already being planned. The full suite of instruments will be brought online in the coming days. A helicopter to be flown on another planet will be flown in late April or early May, another first for planetary exploration. It will provide clues to the many questions researchers back on Earth have about Mars, above all, wondering whether or not the planet once harbored life. 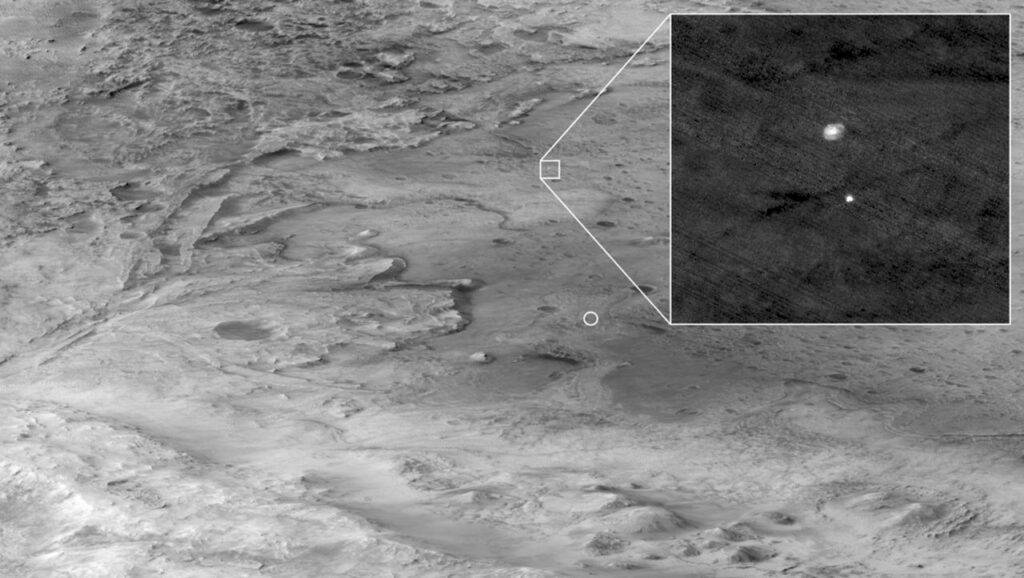 The HiRISE camera on board the Mars Reconnaissance Orbiter took a photo of the landing while the parachute was deployed. The orbiter was also at the same time relaying telemetry from the rover to Earth, because direct signals at the very end of the landing sequence were blocked by Mars. The small circle is the final landing site of Perseverance. Credit: NASA/JPL/Mars 2020

The Perseverance landing is a powerful demonstration of human cognition, science and reason. It is a powerful rebuke to the incessant contemporary glorification of irrationalism and a mighty vindication of the materialist understanding of the world. There are, in fact, objective laws of nature that humans can comprehend and act upon.

The significance of the achievement stands in stark contrast to the social disaster in the US and throughout the world. Two days before the rover touched down, an 11-year-old boy froze to death in Texas during a snowstorm that has collapsed the heating and electrical infrastructure of virtually the entire state.

Dozens more have died on the street or in their homes, while millions lack food, power or running water. Hospitals are being forced to shut down because their utilities are not functioning. Thousands are forced to seek shelter in the few places that do have power, such as community centers and gymnasiums, which in turn threatens to further spread the ongoing coronavirus pandemic. People are being forced to choose between death by frostbite or contagion.

And the pandemic still rages on in Texas, the US as a whole and internationally. Every day, more than 11,000 men, women and children succumb to the virus, including more than 2,000 just in the US. The death toll since January 2020 stands at a half million in the United States and more than 2.4 million worldwide.

The population has an instinctive understanding of this contradiction. In response to a chauvinistic tweet from US President Joe Biden about Perseverance, which claimed that “with the power of science and American ingenuity, nothing is beyond the realm of possibility,” many responded along the lines of: “Not even ending an epidemic? Not even an end to concentration camps? Not even a solution to a climate catastrophe? Not even providing aid to those whose lives are destroyed by freezing winter?”

More broadly, workers know that the methods employed to land a one-ton vehicle on Mars and make other scientific and technical advances should be used to solve social and economic problems, to provide sufficient jobs, education, shelter and food for all humanity. Society absolutely has the capacity to guard against global pandemics, environmental recklessness and nuclear-armed militarism, all of which threaten the life of every human on earth. 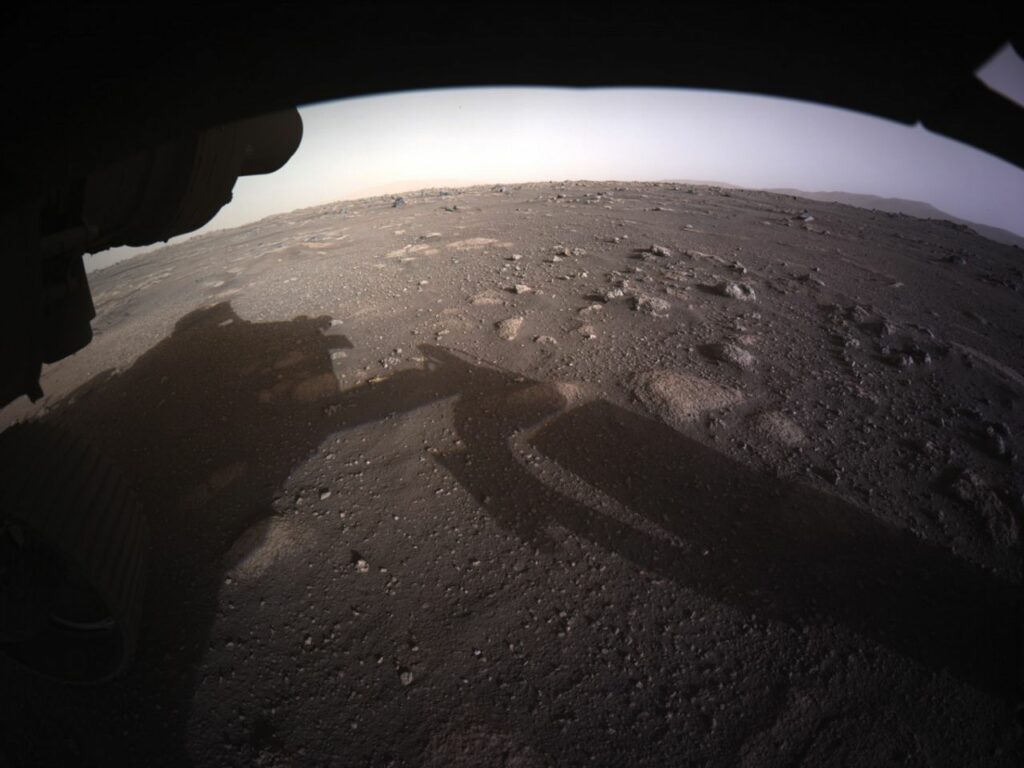 The first color image from the Martian surface by Perseverance reveals a now familiar red landscape, with Perseverance casting a shadow onto the ground and some of Jezero Crater’s many rocky outcroppings in the distance.
Credit: NASA/JPL-Caltech/Mars 2020

If the care that went into making and landing Perseverance had been put into preventing the pandemic, the coronavirus would be remembered as a tragic outbreak largely contained in China that killed thousands, not the largest global public health crisis in a century, which has killed millions.

But the collaboration towards a common goal, driven by the pursuit of knowledge and the general betterment of humanity, stems from the working class and the more thoughtful layers of the intelligentsia, embodied in all those who worked on the Mars rover. Such humane thinking is totally alien to the world’s ruling elite, which flaunts its backwardness, vulgarity, ignorance and parasitism.

The rich instead squander trillions of dollars, yuan, yen, rubles and euros to enrich themselves and wage war around the globe. The $2.7 billion it has so far cost to build, launch and operate Perseverance is less than what was “earned” every week last year by Elon Musk—who moved to Texas to take advantage of its deregulation—and a quarter of the price of just one of the latest generation of aircraft carriers ordered by the Pentagon.

Driven inexorably by its internal contradictions, capitalism is leading mankind toward fascism and war. These same contradictions, however, also produce the basis for the overthrow of capitalism: the international working class.

Such objective processes must be brought into the consciousness of workers, and the growing opposition of millions of workers and youth around the world must be transformed into a political movement that has as its aim the establishment of an internationally coordinated, rationally directed system of economic planning based on equality and the satisfaction of human need: socialism.