The US State Department designated Yemen’s Houthi movement — the most effective force in fighting al-Qaeda — as a “terrorist” organization. Meanwhile, Washington and Saudi Arabia have supported al-Qaeda. 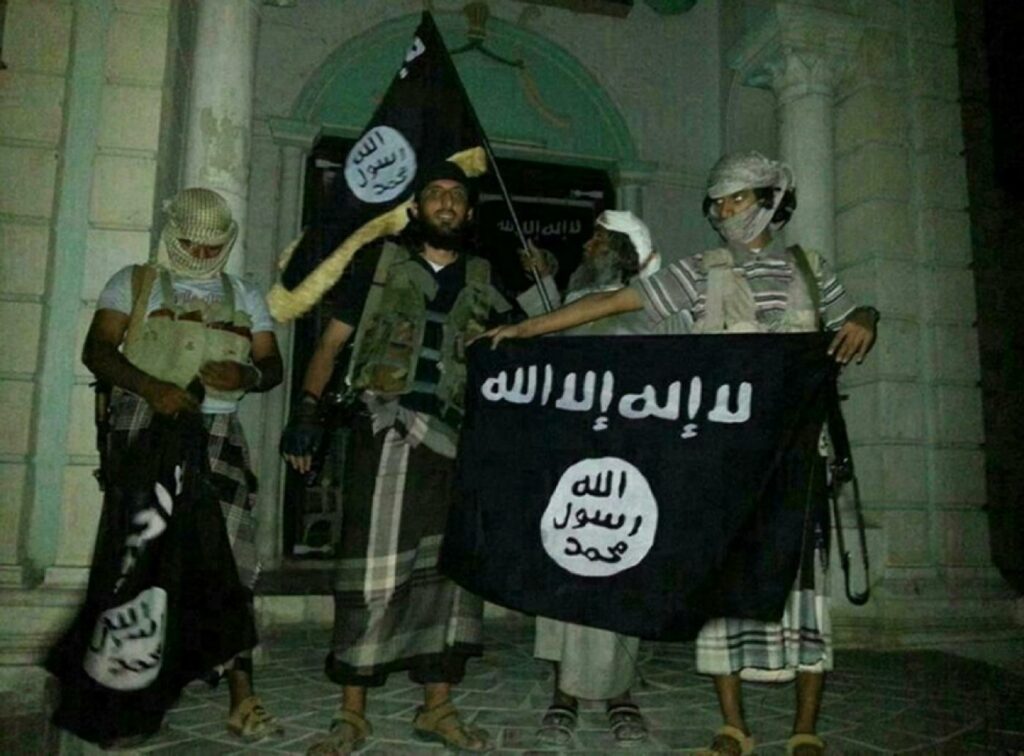 Militants from Al-Qaeda in the Arabian Peninsula (AQAP), which has been supported by the US and Saudi Arabia in Yemen. AFP

12 Jan 2021 – The United States government has designated the main enemy of al-Qaeda in Yemen, the Houthi movement, as a terrorist organization, after spending years backing al-Qaeda in the country.

Like the US-led wars on Syria, Libya, former Yugoslavia, and 1980s Afghanistan, Yemen represents an example of an armed conflict where Washington has supported al-Qaeda and similar Salafi-jihadist extremists in order to foment regime change and extend its hegemony.

Since March 2015, the United States has helped oversee a catastrophic war on Yemen, the poorest country in the Middle East, aiding Saudi Arabia as it launched tens of thousands of air strikes on its southern neighbor, bombing the impoverished nation into rubble — and unleashing the largest humanitarian crisis on Earth.

Hundreds of thousands of Yemenis have died in this US-backed war. Tens of millions of civilians have been pushed to the brink of famine, as a result of intentional US-backed Saudi targeting of food production. Yemen’s health infrastructure was ravaged by the Western-sponsored bombing, precipitating the worst cholera outbreak in recorded history.

Throughout the war, al-Qaeda and other Salafi-jihadist groups have metastasized across the south of Yemen. The spread of these dangerous extremists is not a mere coincidence; it is the result of US government policy choices.

For years, forces in Yemen backed by the United States, Britain, Saudi Arabia, and the United Arab Emirates have fought in alliance with al-Qaeda. (And it is not the only ongoing conflict in the Middle East where the terror group has been allied with Washington. Former top Hillary Clinton advisor Jake Sullivan, now Joe Biden’s national security advisor, chirped in a 2012 email, “AQ is on our side in Syria.”)

There is overwhelming evidence exposing this de facto alliance between Washington and al-Qaeda. It has been documented even by mainstream corporate media outlets, from the Associated Press to the Wall Street Journal.

Western governments and Gulf monarchies are allied with al-Qaeda in Yemen because they share a common enemy: the Houthis, an indigenous, politically orientated Shia movement that emerged out of local struggles to resist Saudi Arabia’s extremist Wahhabi influence in the northern border area of Yemen.

The Houthis, who officially call themselves Ansar Allah, govern the northern regions of Yemen, where the majority of the population lives. They took control of the country after overthrowing an unelected and deeply corrupt US-backed authoritarian regime on September 21, 2014, in what they dubbed the September 21 Revolution.

Since March 2015, the United States and its allies Britain, Saudi Arabia, and the United Arab Emirates have proven unable to dislodge Ansar Allah from power. In desperation, the coalition has collectively punished the entire Yemeni civilian population, destroying much of the country around them in the process.

On January 10, 2021, the US State Department took its hybrid war on Yemeni civilians to the next level by officially designating the Houthi movement as a terrorist organization.

The terror label constituted a major blow to the international aid organizations working to prevent a famine and save civilian lives in Yemen. Because the Houthis run the government in most of Yemen, the designation effectively criminalized aid work in the majority of the country not under Washington’s de facto control.

We are ceasing all operations in the United States for the time being, as well as putting a temporary halt to our intended plans for humanitarian fundraising.

Let it be known that the Trump Administration just criminalized foreign humanitarian aid to #Yemen. pic.twitter.com/uUDEgEu9hP

The southern part of Yemen not governed by Ansar Allah is run by a US puppet government, ostensibly led by unelected President Abed Rabbuh Mansour Hadi, who has spent nearly the entire war living in Saudi Arabia.

Yemen’s US- and Saudi-backed southern government is closely linked to al-Qaeda. And with the full knowledge of officials in Washington, it has used al-Qaeda as the tip of the spear in its war on the Houthis.

US- and Saudi-backed coalition forces in Yemen have actively recruited al-Qaeda extremists in their fight against Ansar Allah, and the US military halted drone strikes on the Salafi-jihadists.

Yemeni al-Qaeda extremists who are individually named on the US terrorism list have been supported and funded by US-backed Gulf monarchies, and have carved out top positions in Yemen’s southern puppet government.

The Salafi-jihadist militants in Yemen are part of al-Qaeda in the Arabian Peninsula, or AQAP, one of the terror group’s most extreme and brutal international affiliates, which used an ISIS-style flag for years before the self-declared Islamic State emerged out of the US-backed wars on Iraq and Syria.