“Progress results only from the fact that there are some men and women who refuse to believe that what they know to be right cannot be done… There come times in history of every people when destiny knocks on their door with an iron insistence… the shape of things to come depends on us, our moral decisions, our wisdom, our vision and our will”. –– Russell Davenport

Wendel Willkie had been a Democrat most of his adult life and was considered as “a wild card” among the Republican elite. Moreover, he had never run for a political office and to start out by wanting to run for President struck some, especially Republican senators and governors, as premature. Willkie was disliked by Democrats as a renegade and by Republicans as an interloper. Willkie was a lawyer for large corporations of the sort that advertised in Fortune magazine of which Russell Davenport was editor.  Willkie  had defended the big electric-generating companies against government regulations. Since the TVA and its state-sponsored creation of energy was one of the major Roosevelt’s projects of FDR’s New Deal, Wendell Willkie became an opponent of policies but without any base among Republicans whom he had joined only at the end of FDR’s first term. 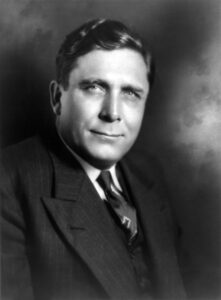 In the 1930s and 1940s, primary elections for party candidates had not taken on the role that they have today, and party conventions were times of political deals in “smoke-filled rooms.” The Willkie campaign, with Davenport as “personal representative” because he needed a title – in reality chief speech writer – filled the visitors’ galleries and balcony with Willkie supporters who were not delegates. They took up the chant “We want Willkie” at every occasion with growing force. Davenport, at 39, was the oldest among the “young guard” that was Willkie’s inner circle. The Floor Manager was Harold Stassen, then the 32 year-old Governor of Minnesota. On the sixth ballot, Willkie was nominated for President and began his campaign just as World War II broke out with the German attack on Norway and France.

Davenport took leave from Fortune to be chief writer on the campaign train that crossed the USA several times, bringing Willkie to many towns. Davenport wrote speeches which attacked FDR’s internal policies while supporting his international role in helping England under Nazi attack. Yet after the campaign, Willkie said realistically “ In moments of oratory in campaigns, we all expand a little bit.” Franklin Roosevelt won easily, but Willkie received more votes than had Republicans in the two earlier presidential contests of FDR.

Willkie’s style and the fine prose with which Davenport had filled Willkie’s speeches had impressed Roosevelt and his circle, in particular his “right hand man” Harry Hopkins who was a personal friend of Davenport. In 1942, Roosevelt decided to send Wendell Willkie on a round-the-world tour to meet allied leaders to show that the USA was united on world policy across the political party divisions. Thus Willkie began a series of meetings with world leaders, in particular the new Soviet partner, Joseph Stalin, as well as going to Africa, the Middle East and China. On his return, Willkie had notes and impressions that Russell Davenport pulled together along with Gardner Cowles Jr. a publisher, and Joseph Barnes, reporter and later foreign editor of the New York Herald Tribune, who had been on the trip. Davenport suggested “One World” as the title. 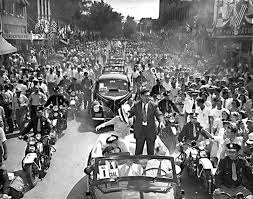 Russell Davenport was deeply influenced by the German theosophical writer Rudolf Steiner who believed in a “world spirit” .  The “world spirit” at work was what Davenport called “destiny”, and destiny called upon everyone to move, to respond to the “spirit of the times”. As Steiner had written “Man is not a being who stands still; he is a being in the process of becoming. The more he enables himself to become, the more he fulfills his true mission.” For Davenport, the “world spirit” was calling to a realization of “One World”. Steiner had stressed that internationalism springs from a love which radiates out to all peoples and races, in order that the light received from them may be kindled in the deeds, conceptions and creations of one’s own people. “Each individual nation must so find its place in the great chorus of the peoples of the earth that it contributes to the full understanding which can alone unite them all in real and mutual knowledge.” As Davenport wrote”the inner knowledge that American policy cannot be merely national, but must, to be valid, relate itself to humanity as a whole.”

Willkie’s One World (1) became a best-seller and the term “one world” became part of the everyday vocabulary. World citizens were called “one worlders”, and the isolationist wing of the Republican Party became largely powerless. Unfortunately, Wendell Willie did not live long after the publication of his book. He died in the autumn of 1944 at the age of 52. Yet destiny keeps knocking, and the shape of things to come still depends on our moral decisions, our wisdom and our will.

Anticopyright: Editorials and articles originated on TMS may be freely reprinted, disseminated, translated and used as background material, provided an acknowledgement and link to the source, TMS: Wendel Willkie (18 Feb 1892 – 8 Oct 1944): “We Want Willkie”, is included. Thank you.