25 Mar 2021 – Mali’s greatest journalist and political analyst, Adam Thiam, has died of COVID. I mourn a friend whom I greatly admired.

How did COVID reach Morocco and Mali? From China, of course, but passing through France and Spain. Most of the bad influences in West Africa come from Europe. Writing about Adam Thiam’s death at the age of 67, reminded me dramatically how Europe has exploited Africa for the past 200 years, and is still doing so. Even the Colombian cocaine smuggling across the Sahara Desert is a form of European exploitation of West Africa: the Medellin Cartel’s main markets are not in Mali, but in London, Paris, Naples and Amsterdam.

Honoring the memory of a brilliant journalist.

I first met Adam Thiam in 1981 in the small river port of Youvarou, deep in Mali’s Interior Delta region where visitors no longer roam for fear of kidnapping. Adam was working for Save The Children Fund as a researcher, which gave him unrivalled insights into rural Mali, particularly in the Fulani cultural zones where his ancestors came from, and where he knew every village and every nomadic camp.

Adam moved to London HQ where he honed his English language and writing skills for SCF, and gained a Master’s degree in food security at the London School of Hygiene and Tropical Medicine.

Coming back to Mali as a journalist, Adam founded a newspaper Tariq-Hebdo for which he recruited me to write a weekly column …. But the cost of production was too high and he joined Le Républicain founded in 1992 by his friend Tiébilé Dramé, who was working for Amnesty in London when Adam lived there. At this period in the early 1990s, Adam also spent time at Harvard University – following the classic route of major African intellectuals.

Dramé’s Le Républicain became Mali’s leading independent newspaper, in part thanks to Adam Thiam’s brilliant editorials. He had the gift of critical analysis and biting wit, combining them with literary elegance to push issues as far as is reasonable in a country where military and religious conservatives hold enormous power.  He once suggested that police uniforms should be sewn without pockets, as a way to limit petty extortion. Tiébilé described Adam’s  death as “le Mali perd un de ses esprits les plus brillants” …. One of Mali’s most brilliant minds. 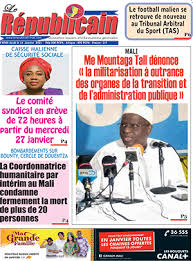 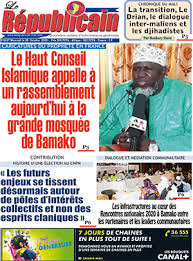 It is sad that Mali did not follow Adam’s insights to reinforce democratic governance and keep social peace. Many of Mali’s political leaders have been too timid, constrained by French, religious and military pressures. Some politicians were unable even to understand what Adam Thiam and others were saying, as the Bamako elite became ever more remote from le Mali profond. And throughout Mali’s history since Independence, the pressures of military ambition, corruption and – more recently – the evils of drug money – have distorted Mali’s political life.

So has the desire of France to control and exploit its ex-colonies.

Adam Thiam’s reported on the Air Cocaïne scandal involving a Boeing 727 that crashed on take-off near the town of Tarkint in Northern Mali at the beginning of November 2009.  This transport aircraft, with the registration mark HZ-SNE, had airworthiness certification that expired on March 11, 2009. The Boeing 727 flew into North Mali from Venezuela carrying Colombian-origin drugs. Landing in Mali, it was met by a convoy of 4WD vehicles that removed the cargo of up to 10 tons of cocaine, and disappeared. No investigators were allowed near for at least three days after the crash.  The air crew was actually found and imprisoned …. then allowed to depart. Even though people in North Mali knew that the Mayor of Tarkint was involved, the Malian justice system failed to hold any Malian accountable.

Big Power Politics are at play here: not only the governments of Algeria and Libya, as well as Mali, allowed the drugs to pass through their frontiers; but also NATO Member States were complicit. NATO controls international airspace, and air traffic controllers follow all aircraft crossing the Atlantic Ocean. Some of European political parties and security services must be involved in sharing the cocaine profits, which run into billions of euros each year. 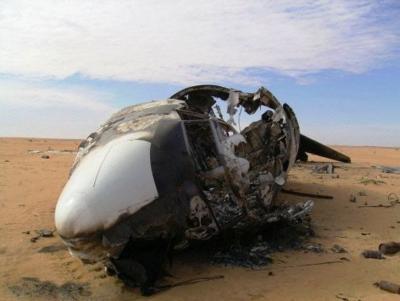 Boeing 727-200 aircraft, with the registration mark HZ-SNE crashed near Tarkint.

Why does no government act to stop the drug trafficking?

Even if Mali wanted to stop the powerful Medellin Cartel in Colombia supplying the Italian Mafia in Europe, Mali’s resources are inadequate to police the vast length of its Sahara Desert frontiers. Only international cooperation between governments could break the supply chain.

Around 2004-2006 I personally tried very hard to get European participation in fighting the Colombian cocaine cartels in Guinea Bissau and across the Sahara desert. The EU ambassador in Mali received me kindly, but had no interest. Various European embassies in Bamako and in Brussels seemed bemused, although their military attachés were interested in my ideas. France’s President Sarkozy refused to help Mali’s President Touré (ATT) limit smuggling, because the latter would not support Sarkozy’s desire to expel Malian residents from France. Later, after President Hollande defeated Sarkozy in the April 2012 election, I received back an informal message from the French Ministry of Defence that “We are happy to watch the cocaine coming through Guinea Bissau, because it allows us to know where it is and can follow it.”  I took this to mean: “We will do nothing to stop the flow of cocaine, which covertly supplies billions of euros to our military allies in Algeria, and to our French allies here in France.”

No matter what Adam Thiam wrote, the Powers-That-Be have financial and military interests that far outweigh matters like Peace, Development, Honesty, or Mali.

Impunity (and military impunity especially) undermines Malian justice; but this is true of NATO countries as well. Everyone remembers President George H.W. Bush extending a presidential pardon to Ronald Reagan’s former Defense Secretary Caspar Weinberger, Colonel Oliver North and a number of other very senior officials who were convicted felons involved in illegal arms sales (and importing drugs) in cahoots with the CIA. Similar actions continue around the world, often using US military contractors. The cases of Bradley Manning, Edward Snowden and Julian Assange, prove that whistle-blowers are persecuted by the USA, while the perpetrators of war crimes are not even investigated, let alone charged with a crime.

Adam Thiam was a literary journalist of great talent

Adam Thiam made plenty of caustic comments about such corruption in Mali and elsewhere. I shall miss Adam’s wit. Sitting under the stars in Adam’s garden in Kalaban Koro, eating Djeneba’s delicious food, I would laugh out loud at Adam’s stories. Because I am British, Adam concocted a saga around his son Mohamed who was born England. “You are always with me, Poulton. Every time my son smiles, I see your eyes looking at me,” he would state in a serious voice. I would explode with laughter, while Djeneba smiled tolerantly. I hope his young son did not understand the joke. 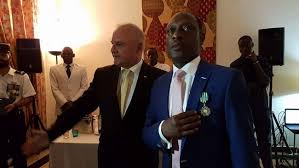 Adam was first and foremost a writer, un homme de lettres. A great reader as well as a great writer, he was proud to have been awarded France’s médaille de Chevalier de l’Ordre national des Arts et des Lettres. He was also decorated by his own country as Chevalier de l’Ordre national du Mali. He honored me on one occasion at the Journées Littéraires de Bamako when chairing a session, by saluting me as a “Major Malian Author”- all the young Malians, who had never heard of me, turned and stared.

That is what killed him: on an official mission to Morocco, Adam contracted the covid-sars-2 virus. Rest In Peace.

Robin Poulton is a member of the TRANSCEND Network who has been working in West African peace and development since 1980. A researcher with UNIDIR Geneva (United Nations Institute for Disarmament Research), School of World Studies at Virginia Commonwealth University, West Africa Research Association and elsewhere, he is author most recently of Peace Is Possible about peace building and disarmament in Cambodia with the Khmer Rouge. Website:  https://robinpoulton.com/. Email: repoulton@epesmandala.com

Anticopyright: Editorials and articles originated on TMS may be freely reprinted, disseminated, translated and used as background material, provided an acknowledgement and link to the source, TMS: Adam Thiam’s Death Reminds Us How Europe Harms Africa, is included. Thank you.