Biden Continues the U.S. Conflict with China through the Quad

16 Mar 2021 – On March 12, the heads of government of four countries, Australian Prime Minister Scott Morrison, Indian Prime Minister Narendra Modi, Japanese Prime Minister Yoshihide Suga, and the United States President Joe Biden, met for a virtual meeting of the Quadrilateral Security Dialogue, better known as the Quad. Modi’s opening remarks illustrate the emptiness of the public agenda; he called the Quad “a force for global good” with no details beyond a list of areas of collaboration (“vaccines, climate change and emerging technologies”). There was no direct mention of China during the meeting.

In the details relating to the launching of “an ambitious new joint partnership that is going to boost vaccine manufacturing,” a more disturbing agenda reveals itself: the vaccines are meant for Southeast Asia, which is a core area of U.S. contest against China, and the “emerging technologies” refers to the U.S. desire to substitute products from its own high-tech firms and supplant the attractiveness of the Chinese high-tech industry. The goal of the Quad is to deepen the military and economic pressure against China.

The Quad was created in the aftermath of the tsunami of 2004 and then deepened by President Obama as central to his “pivot to Asia.” But it did not take off until the U.S. administration of Donald Trump began to rely upon this grouping to tighten pressure on China. It is for that reason that in late 2020, Trump gave the heads of government of Australia (Morrison), Japan (Shinzo Abe, the former prime minister of the country) and India (Modi) the highest U.S. military decoration, the Legion of Merit. These three partners are key players in the U.S. government’s pressure campaign against China. 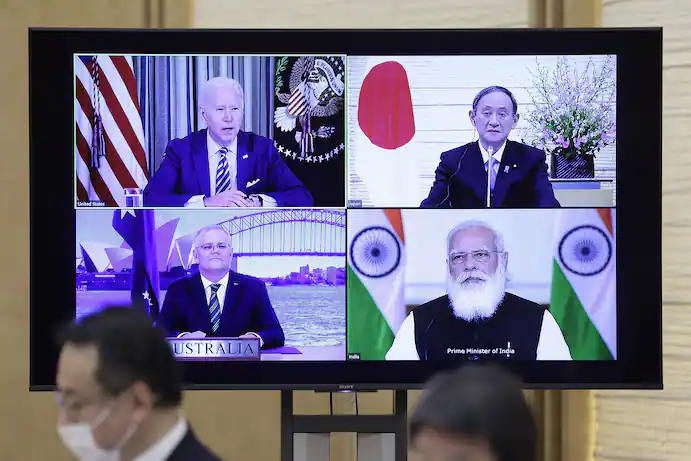 U.S. Primacy in the Region

In early January 2021, the U.S. government declassified a 2018 document prepared for the Trump administration. This document is called “U.S. Strategic Framework for the Indo-Pacific.” The text clearly states that the U.S. objective in Asia is to “[m]aintain U.S. primacy in the region.” The idea of “primacy” has a long history in U.S. foreign policy, going back to the early days after World War II. The United States government, in a series of documents, stated that it would seek to be the leading power in the world, and it would shape the creation of global institutions to benefit the United States above all else. This is the meaning of the word “primacy.”

The drafters of the 2018 policy from the U.S. National Security Council noted that the “threat” from China was not from its military. Rather, the United States worried about Chinese developments in “cutting-edge technologies, including artificial intelligence and bio-genetics.” The U.S. government’s objective, according to the document, was to “[m]aintain American industry’s innovation edge vis-à-vis China,” which does not mean only to enhance U.S. industry, but also to prevent China from getting access to technology and finance. The war in the Pacific promoted by the U.S. is not irrational. As this document further points out, “Loss of U.S. preeminence in the Indo-Pacific would weaken our ability to achieve U.S. interests globally.”

President Joe Biden’s administration, which inherits this document, will not set it aside. All signs show that Biden will continue to push the general line that the U.S. must undermine Chinese scientific and technological development; this goal will be achieved not by the encouragement of U.S. industry but by military threats and by the attempted use of U.S. alliances to exclude Chinese firms from doing business in other countries.

At the Quad discussions, the governments formed a Critical and Emerging Technology Working Group. The point of this group is for the four countries to collaborate on telecommunications and on tech standards. This working group is tasked with convening “dialogues on critical technology supply chains,” which is a direct reference to the attempt to shut out China from any technology or raw materials that would have dual civilian and military usage. It has also been set up to “[e]ncourage cooperation on telecommunications deployment, diversification of equipment suppliers, and future telecommunications.” The use of the word “diversification” is a direct reference to the U.S. attempt to cut out Chinese firms such as Huawei and ZTE from supplanting Western telecommunications companies, which have less sophisticated 5G tools that are also far too expensive.

Be Prepared to Fight

Behind all this rhetoric on vaccines, climate change, and technology lies an even uglier story. On March 9, Navy Admiral Philip Davidson, who heads the U.S. Indo-Pacific Command, appeared before the Senate Armed Services Committee. His statement before the committee was based on a report on the Indo-Pacific Command’s Pacific Deterrence Initiative. That report asked the U.S. Congress to double its outlay to $4.68 billion for 2022 ($22.69 billion for 2023 to 2027). Admiral Davidson said that this money was essential because the U.S. “absolutely must be prepared to fight and win should competition turn to conflict.” He further said that the trade war could easily accelerate into war sooner than 2050.

A week before Davidson made these remarks, U.S. Secretary of State Antony Blinken gave a wide-ranging speech about the Biden administration’s priorities. He listed the names of several countries that present the U.S. with “serious challenges, including Russia, Iran, North Korea.” “But the challenge posed by China is different,” he said.

“China is the only country with the economic, diplomatic, military, and technological power to seriously challenge the stable and open international system,” Blinken said, referring to the world order set up to the advantage of the North Atlantic countries. He was very explicit about who benefits from this system, saying that the system’s rules and values “make the world work the way we want it to, because it ultimately serves the interests and reflects the values of the American people.”

China threatens this, so Blinken said, the U.S. must “engage China from a position of strength.” This is the real purpose of the Quad, not to advance solutions to the great challenges of our time (the pandemic, climate change, war, hunger), but to pressure China to cease its technological advance. If China does not surrender, the U.S.—with the Quad in tow—is prepared to go to war.

Anticopyright: Editorials and articles originated on TMS may be freely reprinted, disseminated, translated and used as background material, provided an acknowledgement and link to the source, TMS: Biden Continues the U.S. Conflict with China through the Quad, is included. Thank you.