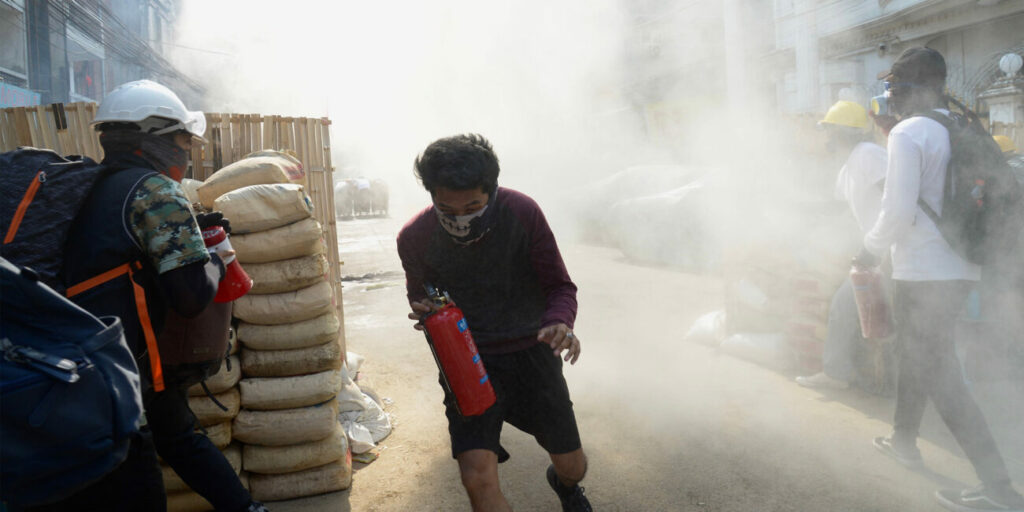 While the ongoing confrontation between Myanmar society and the criminal junta negatively impacts Myanmar’s economy, China is also responsible. Its short-sighted, human-rights-indifferent approach to pursuing its interests, is further aggravating the economic and political conditions with potentially dire consequences for all.

16 Mar 2021 – Social media images of burning Chinese factories in Yangon’s suburban factory district known as Hlaing Tha Ya must be making the already-concerned foreign investors sit up. They will be paying closer attention to the escalating murder and violence by the country’s coup regime, as they try to crush the massively popular revolt against them.

A rise in anti-China sentiment in Myanmar over public perceptions it is supporting the junta raises questions over billions of dollars in planned investment https://t.co/hO7q9povE6 #WhatsHappeningInMyanmar pic.twitter.com/xK5eeq9MDV

Today’s Global Times, the Chinese government mouthpiece, characterized the burning of factories as “barbaric”, while not even making a brief mention of the slaughter of three dozen unarmed peaceful protesters in the same location the same day. Despite public denials of arson by the protesters – who live next to these factories – the Chinese propaganda simply repeats Myanmar junta’s typically deceitful narrative of the victims as instigators of violence and property destruction.  The news outlet then proceeded to label any Myanmar who raise the prospect of destroying Chinese assets “enemies of Myanmar and China who need to be severely punished.”

Myanmar military leaders’ lies are well-documented.  After its troops torched nearly 400 Rohingya villages in 2017 – which amounted to more than 38,000 buildings including mosques, rice storage facilities, residences and shops – the pseudo-democratic government attempted to deceive both the country and the world. They claimed victims of their genocide “burned down their own homes” before running away to Bangladesh.

The escalating popular protests are a direct response to the universally unpopular coup.  Protesters indignantly feel that the coup against Aung San Suu Kyi and National League for Democracy brazenly violates the democratic rights and will of each and every Myanmar voter. Importantly, the coup has angered the non-voting age youth population who are prepared to accept their future as subdued population under the boot of military dictators, irrespective of whether the NLD is at the helm or not.

On certain designated nationwide strike days, the protests draw as many as 25 million people, roughly half the country’s population, onto the streets of towns and cities, villages and even hamlets. Parents are seen blessing their young sons and daughters, going out to the streets.

A Hong Kong-based French journalist specializing in Southeast Asia characterizes the daily protests as “urban civil war”. These protests have been met with the “daily slaughter” by the junta, as one army-bred activist friend of mine said. He has joined the nationwide protests – now in their 38th day.

TW//Violence
Myaing POKOKKU, Myanmar
Around 11:30 am at least 7 people were killed by military terrorists while violently cracking down the protest today.
Please save Myanmar people by action.

The 15-member UN Security Council, including Myanmar military-friendly China and Russia, unanimously endorsed the Council President’s 10th March Statement, which “condemns the violence against peaceful protestors, including against women, youth and children. It expresses deep concern at restrictions on medical personnel, civil society, labor union members, journalists and media workers, and calls for the immediate release of all those detained arbitrarily.”

A week before the Council’s consensus condemnations, UN High Commissioner for Human Rights Michelle Bachelet demanded that “Myanmar’s military … stop murdering and jailing protestors” while highlighting the enforced disappearances of detained protesters and arbitrary arrest of over 1750 protesters.

By definition, murder of peaceful civilian protesters by security forces, enforced disappearances of activists, summary executions and death by torture (of prominent NLD members and others) are crimes against humanity.  According to the Radio Free Asia data released on 14 March, the number of murdered protesters has reached 130+ since the anti-coup protests which mushroomed across Myanmar a month and a half ago.

In response to the coup and the subsequent bloody assault on protesters, US President Joe Biden announced the freezing of the $1 billion Myanmar government fund in the US financial system. This was followed by the US Government’s move to stop financial transactions through the US by the military’s two corporate conglomerates with the combined worth of estimated $16.5 billion.

The junta has evidently numbed itself to the impact on Myanmar’s economy and to the financial impact on the military as an institution of targeted sanctions.  Additionally, it seems not to care about the World Bank’s effective moratorium on loans and grants to the country, despite the damage such punitive measures will have on the country’s economic life and covid-impacted public health and social sector. 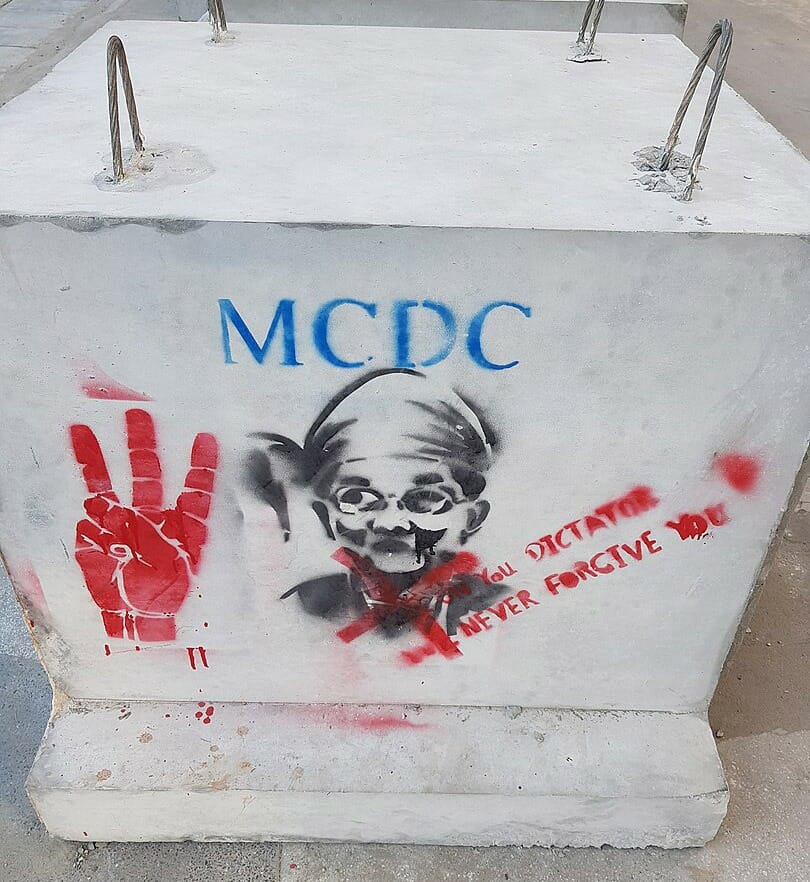 There are three major reasons for the imperviousness o the generals and their families.

First, the regime is rightly convinced, thanks to Beijing’s veto protection, of the impossibility of Security Council-authorized military intervention and the kind of crippling economic sanctions that were used in Iraq.

Second, the families of the military leaders run expansive business empires within close-knit mafia-like webs of interlocking business interests in partnership with many local Chinese tycoons, whose children also marry into top military families.  These networks have for several decades laundered and parked the military leaders’ ill-gotten gains in banks in China and Singapore, according to sources in Yangon familiar with these financial arrangements.

Third, the top five investors in the military-controlled Myanmar economy are Asian investors who are not constrained by national laws at home, or moral considerations from their governments.

The World Bank data show that Singapore and Hong Kong (China) were two largest foreign investors in Myanmar as of 2020, accounting for 34% and 26% Foreign Direct Investment respectively in that country.

Even when Kirin, one of Japan’s largest beer-producers, decided to cut ties with its military-linked business partner it was solely due to the pressure from the international activist campaigns, and the resultant bad press. Kirin’s divestment is despite Tokyo’s whitewashing of Myanmar’s genocide.

In sharp contrast to Singapore and China investors, even in the early days of the protests, other foreign investors have reportedly been concerned about the negative impact on the country’s economy and in-country businesses.  The day after the coup, BBC Asia Business report (dated 2 Feb.) ran a story entitled “Military coup likely to damage Myanmar’s economy”, quoting nervous foreign investors and risk analysis firms. Stephen Lamar, president of the American Apparel & Footwear Association was quoted as saying, “many of the trade group’s members did business in Myanmar and found the coup deeply concerning.”  According to the same BBC report, Anwita Basu of Fitch Solutions, a financial data firm, said the coup had cut in half Myanmar’s projected 6% economic growth prior to the coup.  In addition, she was quoted as saying, “the biggest investors that will be impacted by this, will be Asian investors, and you have seen a very tentative reaction from a lot of these countries.”

These investors and business are right to be tentative about doing business with Myanmar after the coup. For the situation has all the signs of a protracted bloody civil-military conflict. Unlike previous urban-based anti-military protests going back to the 1960’s, today’s protest movement aligns the pervasive pro-democracy and pro-human rights perspective of the country’s multi-ethnic public in the cities and towns with that of minority communities scattered throughout the border regions, where a dozen or so well-armed Ethnic Armed Organizations fight for a federal democracy while controlling large swarths of territories and minority populations.

Be it the military’s Rohingya genocide or the ongoing crimes against humanity against majoritarian Buddhist public, the entire Myanmar society are acutely aware of the killers’ emboldened sense of impunity, which has been handed to them via the United Nations. They know that the generals’ sense of impunity and invincibility is rooted in the power held by their neighbour, China, which plays an instrumental role in the decades-long oppression.

Of all the foreign investors, Beijing has been the Myanmar military’s most important protector at the Security Council, and enabler of the widely despised military junta.  This is the junta which Myanmar people commonly view as “the existential threat to the country and (democratic) polity”, echoing such characterization by Myanmar representative at the UN General Assembly on 26 February, Ambassador Kyaw Moe Tun.

The Burmese public, both in real space and in social media, are expressing their tremendous public rage against China for enabling and protecting the Burmese military.

Instead of using its clout with the junta to reign in the latter’s terroristic and murderous handling of popular protests, China has placed its economic assets before the safety of 53-million Myanmar. Meanwhile, it has framed the military’s international crimes as “an internal affair.”  Nervous about the protests’ economic impact on its strategic assets, Beijing held “secret” meetings with Myanmar military business partners and security officials to make “security arrangements” to protect the pipelines, Chinese businesses across the country – as evidenced in the Myanmar MOFA-leaked minutes of one such meeting held on 23rd February.

While the ongoing confrontation between Myanmar society at large and the criminal junta is bound to negatively impact Myanmar’s economy, China is also responsible. Its short-sighted, human-rights-indifferent approach to pursuing and protecting its interests, is further aggravating the economic and political conditions with potentially dire consequences for all.