The military’s brutal attack on peaceful protesters has understandably sparked calls for armed insurgency. But such a move could set the movement back. 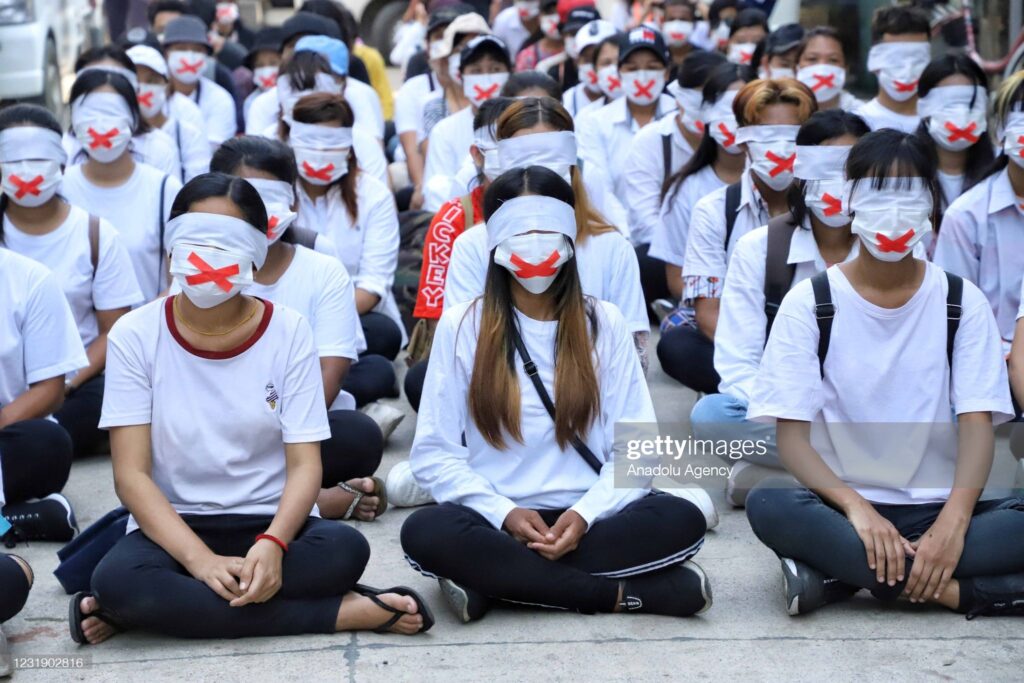 YANGON, MYANMAR – MARCH 24: Protesters called for a “silent strike” with businesses and shops set to close and people to stay in their homes, with the aim of shutting down entire towns and cities in Yangon, Myanmar on March 24, 2021 after Myanmar’s security forces shot dead a 7-year-old girl in the city of Mandalay. (Photo by Stringer/Anadolu Agency via Getty Images)

24 Mar 2021 – Since Feb. 1, when the Tatmadaw military leadership launched a coup against the democratically-elected government, the Myanmar people have led a remarkable campaign of civil resistance to restore democracy. Nearly every segment of the population, including young women, civil servants, transportation workers, bankers, members of the Buddhist sangha, and even some members of the police and security forces have gone on strike or defected to the opposition to pressure the junta. Tech-savvy Burmese youth have mobilized the resistance on and offline, devising creative tactics and clever messaging to evade censorship and spread dissent. The scope and depth of what organizers are calling the Civil Disobedience Movement, or CDM, have been astounding. And it came together very quickly. After all, resistance isn’t new to the Burmese people. Their demands for democracy are as much a part of their history and culture as the repression they’re once again facing down in the streets.

Burmese democrats have paid a price for their resistance: at least 275 people have been killed and 2,812 have been detained since the coup, according to the Assistance Association for Political Prisoners, a Myanmar-focused human rights organization. The military’s brutal attack on peaceful protesters has prompted growing calls within the pro-democracy movement to take up arms against the brutal military dictatorship. That’s understandable. When you witness friends, family and loved ones being murdered or tortured, and when you feel that your struggle is being ignored by the rest of the world, it is natural to want to fight violence with violence.

Strategically, however, turning to armed insurgency tactics to resist the coup could backfire in disastrous ways. Studies have shown that mixing violent and nonviolent resistance typically results in even more brutal regime responses, resulting in an increase in protester casualties, decreased participation in the resistance, and a lower level of security force defections. It should come as no surprise that governments invest heavily in fomenting violence within opposition movements. Repressive regimes need violence to justify their white-knuckled grip on power and their claims to be defending “law and order.” The Tatmadaw would be no exception, especially as increasing sanctions and strong statements of condemnation from nations show that the junta misjudged how much the world would care. When they are facing pressure it’s likely they’ll come out swinging — and in this case, at their own people.

The most effective antidote to dictatorship is organized and disciplined nonviolent resistance, including mass non-cooperation.

This type of struggle is most likely to attract and sustain mass and diverse participation (including from religious and business elites who may have supported the junta at the beginning of the struggle), encourage tactical innovation and creativity (which the Burmese have no shortage of), prompt police and military forces to join the side of the resistance (like what we saw during the 1983-86 people power movement in the Philippines, when entire units defected to the side of the democratic opposition), and lead to international pressure on the regime (including from within the Association of Southeast Asian Nations, or ASEAN, which is currently divided). Nonviolent resistance is also more palatable for donor nations to get behind. The United States and other influential nations that support democratic movements can justify sending cell phones and cash to protesters but would (rightfully) have a hard time cutting through red tape and politics to send weapons to untrained activists. 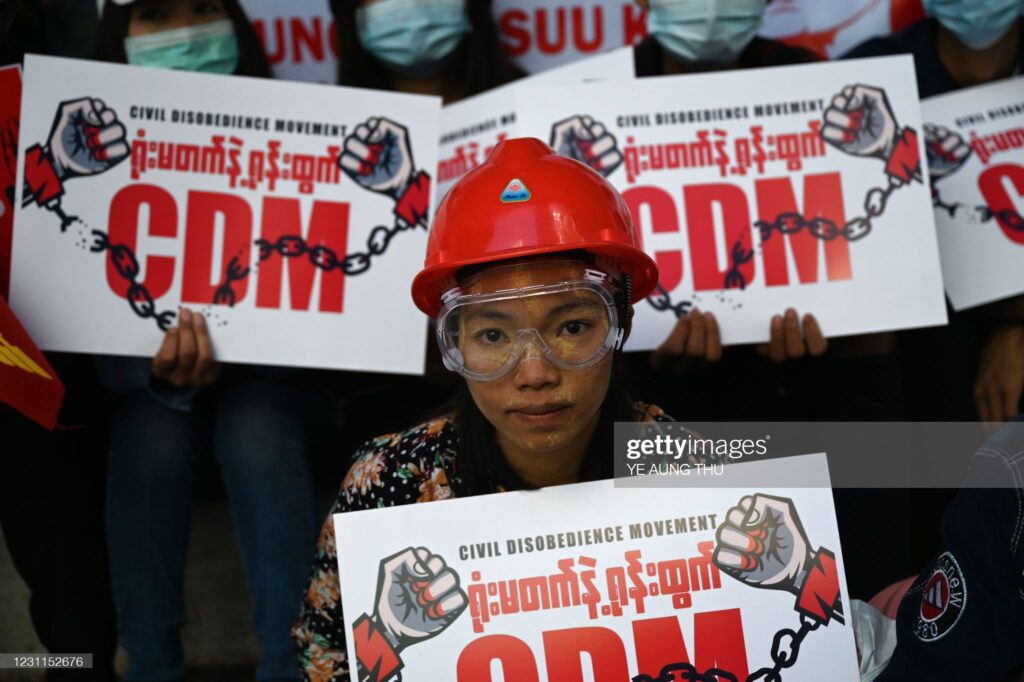 Protesters hold up signs supporting the Civil Disobedience Movement (CDM) at a demonstration against the military coup in Yangon on February 14, 2021.
(Photo by YE AUNG THU/AFP via Getty Images)

Mass nonviolent campaigns are 46 times more likely to succeed when there are widespread security force defections, and defections are much more likely in the context of nonviolent campaigns compared to armed struggles. Meanwhile, women’s participation and the participation of the elderly and disabled people often decline significantly once opposition movements take up arms. Since robust women’s participation is correlated with successful nonviolent campaigns, this is highly problematic for resistance movements. Women in Myanmar have been on the frontlines leading the charge for democracy and putting themselves at great risk. Their bravery and courage is — in part — meant to put the junta’s actions to shame. It’s working, but it will take time.

The CDM has achieved significant victories in a very short period of time. The scope and scale of participation in the boycotts, strikes, demonstrations, songs and tattoo resistance, and other acts of civil disobedience and non-cooperation have been significant. The intensity of the junta’s propaganda machine is proof of the efficacy of the movement. So, too, is the growing pressure from the international community.

On March 10, the U.N. Security Council passed a resolution condemning the violence against peaceful protesters in Myanmar and pledged “continued support for the democratic transition” in the country. The United States, European Union, Canada, and the U.K. have imposed targeted sanctions on junta officials, their families and military-owned businesses. Myanmar’s Southeast Asian neighbors, typically reluctant to speak out about the internal affairs of other governments, have taken a stand. Indonesia and Malaysia have both condemned the violence targeting unarmed civilians, while Singapore expressed disapproval at the army’s response. Indonesia and Brunei have called for a special meeting of ASEAN to address the crisis. Several Asian nations are declining to attend Myanmar’s storied Armed Forces Day. Meanwhile, a growing international solidarity effort, led by the Milk Tea Alliance, a cross-Asian alliance of activists, has featured people all around the world taking photos of themselves making the three-finger Hunger Games salute in support of the Myanmar pro-democracy movement.

It is always difficult to predict the duration of popular uprisings, and that makes it especially hard to encourage protesters to stay the course. While a number of historical anti-coup campaigns, including the resistance to the 1987 Argentine military coup and the popular resistance to the coup attempt in Burkina Faso in 2015 were over in a matter of days, the context in Myanmar is quite different. The Myanmar people are facing a military dictatorship that has been in power for decades. On average, major nonviolent campaigns against dictatorial regimes have taken three years to run their course. Violent campaigns, by comparison, have lasted an average of nine years.

The idea that picking up arms will hasten the pathway to victory is not born out by research.

As difficult as it might be, particularly at a time when security forces are using live fire against unarmed protesters, Burmese pro-democracy organizers should prepare mentally, strategically, organizationally and tactically to wage a sustained campaign of civil resistance against the junta.

Many Myanmar activists are on the run, which makes planning and coordination difficult. With the support of diaspora and other external actors, Myanmar pro-democracy leaders should find ways to convene and plan campaigns that target the junta’s vulnerabilities and avoid playing to their strengths. Successful nonviolent campaigns have typically alternated between methods of concentration, such as rallies, sit-ins, and blockades, which can be powerful but make people highly vulnerable to repression, and methods of dispersion like consumer boycotts, strikes and stay-at-homes, which can cripple the bureaucracy and economy while causing security forces to over-extend themselves, making it very difficult to sustain repression indefinitely.

Of course, the CDM has been using all of these tactics — very impressively. Now is the time to double down on long-term strategic planning while investing in the organizing infrastructure to make sustained resistance possible. The International Center on Nonviolent Conflict has a number of articles and training resources on strategic nonviolent action, translated into Burmese, that could support this effort.

Pro-democracy leaders should be very specific about the types of external support they need, as these Myanmar women activists have been. Governments, multilateral organizations and non-governmental organizations and solidarity groups should closely coordinate their activities with pro-democracy leaders. Diplomats from democratic embassies in Myanmar can use their immunity to physically stand in solidarity with protesters and deter violence targeting them. They can support quiet mediation efforts to help prevent and mitigate violence. They can broadcast the internet if needed and negotiate safe harbor including with third countries for activists particularly at risk. The private sector, notably in the gas and oil industries, can divest from companies whose revenues are lining the pockets of the junta and enabling its repression. Telecom companies can ensure the internet remains free of surveillance, censorship and black outs. Citizen movements can generate pressure on these corporations to do the right thing.

At a time when the struggle for democracy in Myanmar might seem hopeless, it is important to reflect on the victories that civil resistance has achieved in the country over the past two months. And to invest in the strategies, capabilities and organizing infrastructure that the Burmese pro-democracy movement needs to propel the country into a new democratic future. This will likely take a combination of mass resistance and skillful negotiations with different parts of the Tatmadaw, which at some point may be looking for a face-saving way out of the conflict. In the meanwhile, the activists should know that they have many admiring supporters rooting them on from the outside.

Maria J. Stephan is the co-author of “Why Civil Resistance Works: The Strategic Logic of Nonviolent Conflict,” “Bolstering Democracy: Lessons Learned and the Path Forward,” and “Is Authoritarianism Staging a Comeback?”