Nine Things That Need to Happen for New Inclusive Myanmar 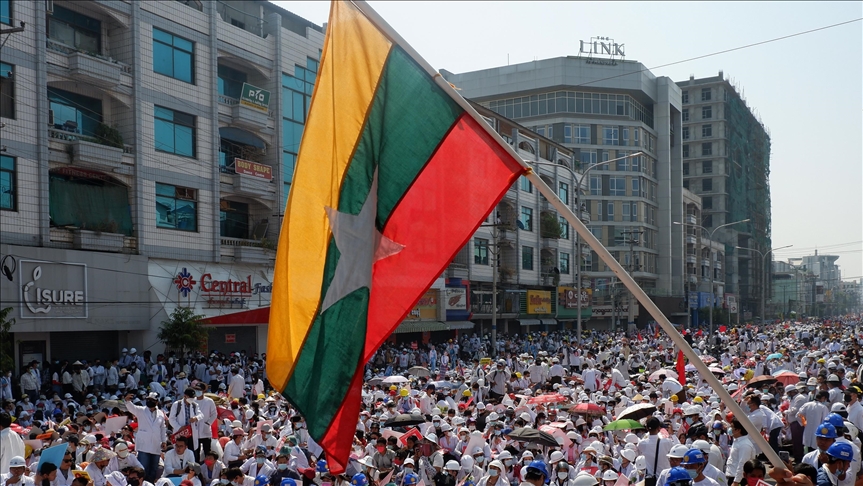 23 Feb 2021 – Yesterday, millions of Myanmar’s people took to the streets in open defiance of the officially televised threats of a brutal crackdown by the Tatmadaw or military usurpers who thwarted their democratic aspirations with a pre-dawn coup of Feb. 1.

For the last 3 weeks, I have been running on empty since the coup’s first day. I note that the masses of protesters in Mandalay – as well as in Yangon, and other towns and cities – have been unarmed, peaceful, extremely disciplined, defiant, and creative.

In smaller cities such as Putao in Northern Myanmar and Pyinmana, adjacent to the capital Nay Pyi Taw, where the protests were not as large or overwhelming as those in bigger towns and cities, the machine-gun-wielding plainclothes troops and riot-police were seen on citizens’ Facebook LIVES playing cat and mouse with small groups of anti-coup protesters. In Myeik or Beik on the Taninthayi southern coastal region, soldiers took as hostage grown-up family members when activist parents whom they came to arrest were found to be in hiding.

Having quarantined themselves in their silo of military – an exclusive and separate society within the Myanmar society at large – the coup leaders – two of whom are my old “mates,” namely the acting President ex-General Myint Swe and General Mya Tun Oo, now holding the Defense Minister’s post – have catastrophically misunderstood an entirely different type of society, which is no longer prepared to live under the boot.

Worse still, the coup group has found itself deprived of a functioning state, thanks to hundreds of thousands of civil servants refusing to work in the military-controlled state organs. Besides, the Tatmadaw or the military has taken the most devastating blow to its reputation and standing in society since its founding under the WWII Fascist patronage of Japan, with Ms. Suu Kyi’s father as its local proxy commander.

A banner in a Yangon protest reads, “There are no more armed forces, but just murderous terrorists.” I nodded along glancing at the banner’s message on my Facebook. After all, I went to bed last night after, on Al Jazeera Newshour program, having called for anti-terrorist governments and organizations worldwide to designate the coup leaders as terrorists – for their genocide against Rohingyas, crimes against humanity, and war crimes against other national minorities, and general political repression and crimes against the majoritarian Burmese Buddhist society.

Overall, with their 22222 Revolution (Hnit Nga Lone Ayay Daw Bone in Burmese), the popular colloquial reference to their General Strike on 22/02/2021, the multiethnic peoples of Myanmar have spoken, in unison and without any equivocation.

Their message: We, the people of Myanmar, are no longer afraid of army’s bullets, real or rubber, night raids, and kidnappings, arbitrary and unlawful arrests, torture, and unlawful imprisonment with hard labor without due process. These crimes against humanity, against pro-human rights and pro-democracy citizens typically ensue any uprisings over the last almost 60 years since the military imposed its first illegitimate and unpopular rule on society in 1962.

Equally important, the strikers’ broader message goes beyond “freedom from fear” or calling for the reinstatement of the elected Aung San Suu Kyi government: millions of protesters want to build a qualitatively different kind of society than the racist, divisive one moulded by decades of the Tatmadaw or military’s propaganda. They demand both a functioning and genuine – not the “army-disciplined” – democratic system and an inclusive, empathetic society which celebrates, not prey on through religious and racial divide and rule, diversity.

LGBTQ citizens showed up at rallies, wrapped in rainbow flags, alongside activists from faith-based communities, while troops arrested and whisked away the well-known LGBTQ activist Ma (Ms) Phae Wa, clad in a traditional silky yellow sarong, which, as a sign of revolt, she wore upside down.

Among the public messages from the placards and banners were “apologies for our majoritarian silence to Rohingya, Kachin, and other national minorities persecuted by Myanmar’s armed forces” or “Down With Majoritarian Racism.” Interfaith sisters were literally holding hands – representing Islam, Buddhism, Hinduism and Christianity – occupying the front lines of rallies, while the younger generation leaders such as Ms. Ei Thuzar Maung of a Democratic Progressive party for a New Society and her minority activist sisters are on record, articulating their inclusive social and political visions and challenging the military’s rank and file to turn their back on the repressive regime.

While the generals will most definitely be daunted by the unmistakable sights of the entire society in revolt against its domination, control and ruthless reign of 50+ years, the junta may also be hell-bent on repeating the societally costly mistakes of the previous coup regimes.

With a sense of cautious hope and a desire for what Myanmar could potentially be – a vibrant, all-inclusive multiculturalist, forgiving and tolerant society – I am spelling out the nine things which I think are urgently needed to avert the looming prospect of another 50 years of isolation, international condemnations and the resultant pariah status, internal strife, ongoing civil war, poverty, hatred, and racism.

The first order of business will have to be the unconditional release of all detained elected MPs and others (approaching 1,000 since Feb. 1 according to the Assistance Association for former Political Prisoners).

Second, Aung San Suu Kyi’s government ought to be restored, not as the ruling party until 2025, but as the interim government, which should be tasked to draft a new People-centered Constitution vis-à-vis 2008 Constitution of, for and by the military.

This interim nature of the Suu Kyi government is meant to address the valid concerns that the National League for Democracy party under autocratic Aung San Suu Kyi has become a one-party autocracy, owing to the cultist popularity which she enjoys unconditionally. Democracy requires healthy checks and balances, both within the parliament and the broader state power structures. Wittingly or not, Ms. Suu Kyi’s absolute dominance is, objectively speaking, a fundamental obstacle in Myanmar’s democratic politics.

Third, the State Administrative Council needs to step down in exchange for special amnesty by the interim government. The generals on this council have been put on the list of “persons of concern” by the US, UK, Canada and Australia.

Fourth, the fundamentally anti-democratic Constitution of 2008, written by the military to institutionalize its interests and prerogatives above all other organs of the state (such as executive, judiciary, and legislative) and equally important above the popular will. After all, the coup has been justified on the grounds of the military’s peculiar constitutionalism, without the essential pillar of checks and balances.

Fifth, with the support and cooperation of the interim government, the military leadership and the country’s multi-ethnic nations must draft an inclusive People’s Constitution along with the Big Tent national vision clearly articulated by Ms. Suu Kyi’s father, the martyred Aung San, who is also the founding commander of the Burmese military. According to the late Aung San’s original vision, a new independent, post-colonial Burma was to be a secularist, non-racialist Union of free and equal ethnic nations who voluntarily formed a stronger and richer Union out of a myriad of ethnic communities with different histories, identities, languages, and customs.

Sixth, there has to be a re-commitment to building the post-2021 coup in Myanmar as a genuinely federated Union among ethnic communities and regions. The radical deviation from this founding vision has triggered a long series of armed conflicts in Myanmar since Aung San’s untimely assassination in 1947. Ms. Suu Kyi herself has failed to internalize her father’s sacred principle of equality of ethnic groups. Tragically, she has sung from the same Myanmar or Bama-centric hymn book of the Burmese military and sided with the military vis-à-vis autonomy-seeking national minorities.

Seventh, to begin moving towards this aim, the military leaders must make good faith efforts to withdraw Tatmadaw troops from the non-Myanmar majority states, which make-up about 40% of the total population and perhaps roughly half of the country’s territories. There is already an ongoing well-funded ceasefire negotiation process in place for the last 10 years, but the coup has resulted in the dozen armed groups officially suspending any meetings or interactions with the Burmese military.

Eighth, the new government will need to follow the Civil Disobedience Movement’s lead on world infamous Burmese racism and de-institutionalize it in schools, official discourses, mass media, and communal ties. As evidenced in the anti-racism banners and signs, Burmese society at large is unlearning racism towards non-Buddhists. The widely reported “deep-seated” racism of the majoritarian Burmese society is neither inherent in society nor encoded in the majority’s mental DNA.

And last but least, finally, the Burmese public consciousness is being rudely awakened – in favor of human rights for all – by the outpouring of images of solidarity and empathy coming from even survivors of Myanmar genocide, as far as Cox’s Bazar refugee camps, as well as from amongst the Rohingya diaspora worldwide. The new post-coup government – and society – must extend their entitlement of human rights and democracy to the 1-million Rohingyas who survived different waves of genocidal purges by their flight across the borders in Bangladesh.

I know this is a tall, very tall, order for a society and a politics that has been marked and marred by nothing but conflicts, poverty, racism, sexism, discrimination against LGBTQ, and classism. But revolutions are seismic events, which trigger the emergence of a new collective consciousness. Myanmar society is undergoing this progressive shift in consciousness. Her people need and deserve political leadership that has a Big Tent national vision and the capacity to realize it.