China’s Treatment of Uighurs Is ‘Crimes against Humanity’: Report

Human Rights Watch is the latest to document policies of mass detention, torture and cultural persecution in Xinjiang. 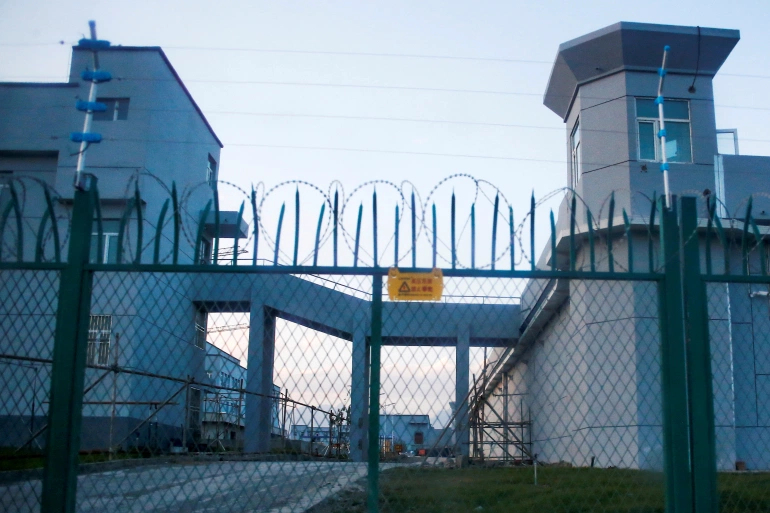 A perimeter fence is constructed around what is officially known as a vocational skills education centre in Xinjiang Uighur Autonomous Region, China.
[File: Thomas Peter/Reuters

19 Apr 2021 – China is committing crimes against humanity in its treatment of the Uighur ethnic minority and other Turkic Muslims in the northwest region of Xinjiang, with Beijing responsible for “policies of mass detention, torture, and cultural persecution, among other offenses”, Human Rights Watch has said in a new report.

The report, which was authored with the help of Stanford Law School’s Human Rights and Conflict Resolution Clinic noted that while Beijing’s oppression of Turkic Muslims is “not a new phenomenon”, it has reached “unprecedented levels”.

As many as a million people have been detained in 300 to 400 facilities, including “political education” camps, pretrial detention centres and prisons, the report said. Meanwhile, children whose parents have been detained are sometimes placed in state institutions.

Since 2017, when Beijing intensified its crackdown, arrests in Xinjiang accounted for 21 percent of all arrests in China, despite the region accounting for just 1.5 percent of the population, the report said. Arrests in the region increased by 306 percent in the last five years as compared to the first five years.

Since 2017, the Chinese government has also “used various pretexts to damage or destroy” two-thirds of mosques in the region.

“To be clear, crimes against humanity are serious specific offenses, knowingly committed as part of a widespread or systematic attack against the civilian population,” Sophie Richardson, China director at Human Rights Watch, said at a press conference on Monday. “And these are among the greatest human rights abuses under international law.”

Richardson noted that while their research had not yet reached the high bar under international law to prove “genocidal intent” by the Chinese government, “nothing in this report precludes that finding”.

The United States government, the parliaments of Canada, Belgium and the Netherlands, and other rights groups have already labelled Beijing’s actions genocide. Several countries, including the US, European Union, United Kingdom and Canada, have imposed targeted sanctions.

Beijing has long denied allegations of abuses, dismissing them as “slanderous attacks” saying the detention camps in question are “vocational training centres” meant to stem “extremism”.

Speaking at the press conference, Kenneth Roth, Executive Director of HRW, called for “coordinated international action” and urged the United Nations Human Rights Council to create a commission of inquiry with authority to investigate allegations of crimes against humanity, identify officials responsible for abuses and provide a road map for holding them accountable.

The report, which drew on information from government documents, human rights groups, the media, and scholars, also provided recommendations for governments to put pressure on Beijing for the alleged abuses, including “pursuing individual criminal and state responsibility for these crimes, targeted sanctions, and actions under other UN mechanisms, such as the International Convention on the Elimination of All Forms of Racial Discrimination (ICERD)”.

Roth also called on companies to cut ties with Xinjiang, saying “it is not possible at this stage for companies to import from Xinjiang without risking complicity in the pervasive use of forced labor”.

Monday’s report said that the “level of coercion” involved in government programmes that place Turkic Muslims in jobs in Xinjiang and China “appear to have dramatically increased” in recent years.

The report added that “evidence indicates that detainees have been sent to perform forced labor after they were released from Xinjiang’s political education camps … Satellite images also show the recent emergence of new factories, connected to or near the camps, where inmates allegedly provide low-cost or unpaid labor.”

One Response to “China’s Treatment of Uighurs Is ‘Crimes against Humanity’: Report”