Despite U.S. Dirty Tricks, Bolivia Is Finding a Way to Stay Independent

29 Mar 2021 – Sentiments in Bolivia for and against the coup d’etat of November 2019 are predictably along class lines. Those from more affluent sections felt that the socialist policies of the government of President Evo Morales (which was in power from 2006 to 2019) were eating into their authority. But these sections could not oust Morales at the ballot box because his policies of redistribution were wildly popular among the mass of the population. Morales won three elections, each of them with a decisive mandate: winning 53.74 percent in 2005, 64.08 percent in 2009, and 61.36 percent in 2014.

Pressure to prevent Morales from running in the election in 2019 mounted early, but it failed. The opposition—with the full backing of the U.S. government—tried to undermine the October 2019 election by painting it as fraudulent. With no real evidence, the military—with a green light from Washington, D.C.—moved against Morales, sending him into exile.

Morales was replaced by a minor extreme right lawmaker, Jeanine Áñez, who became the interim president. Harsh repression against Morales’ party, the Movement for Socialism (MAS), followed, and Morales was forced to leave Bolivia. Almost immediately, then U.S. President Donald Trump said that the coup “preserves democracy.” As the violence of the coup unfolded, U.S. Secretary of State Mike Pompeo described it as “Bolivia’s political transition to democracy”; Pompeo’s statement was made on November 21, 2019.

Two days before Pompeo’s statement, troops under the authority of Áñez conducted two documented massacres of MAS supporters at Senkata and Sacaba (near El Alto). The day after the killings, and the day before Pompeo’s statement, the New York Times reported on the killings in Senkata. None of this mattered to Áñez, whose Defense Minister Luis Fernando López denied the murders (“not one bullet was fired,” he said), or to Pompeo. This kind of coup was business as usual for Washington, D.C. (I recount the story of this coup in Washington Bullets, my book about the CIA, coups and assassinations.)

But the Bolivian people were not going to allow their democratic rights to be stolen. They began to organize against the Áñez regime, which tried to postpone elections over and over again. Eventually, a month before the October 2020 elections were held, Áñez herself dropped out for her embarrassingly low poll numbers, and the MAS—led by Luis Arce and David Choquehuanca—prevailed with 55.10 percent of the vote. Morales returned to the country triumphantly, and President Arce revived the MAS agenda to advance the interests of the Bolivian people.

No Impunity for Coups

No coup can go by without some framework to reestablish faith in institutions and to prevent the feeling of impunity among the coup makers. Therefore, after a legal process, on March 13, the Bolivian authorities arrested a dozen people, most of them political leaders of the coup, and released arrest warrants for military officers who exceeded their constitutional authority. The most high-profile arrest was of Áñez, who tweeted, “The political persecution has begun.” A warrant was made for General Williams Kaliman who nudged Morales to resign. It is telling that two of the men who were to be arrested—Defense Minister Luis Fernando López and Interior Minister Arturo Murillo—have taken refuge in the United States. Yerko Núñez Negrette, another minister, who came out shouting about a “hunt for former ministers,” has vanished.

Not long after the arrest, the new U.S. Secretary of State, Antony Blinken, released a statement warning of the “anti-democratic behavior” of the Bolivian government. It is important to pause here: Blinken, U.S. President Joe Biden’s secretary of state, is not critical of the coup of November 2019 but of the arrest of the coup makers in March 2021. Trump said that the coup “preserves democracy,” and now Blinken says that the legal process against the coup makers is “anti-democratic.” The word “democracy” has lost its meaning when uttered by U.S. government officials. 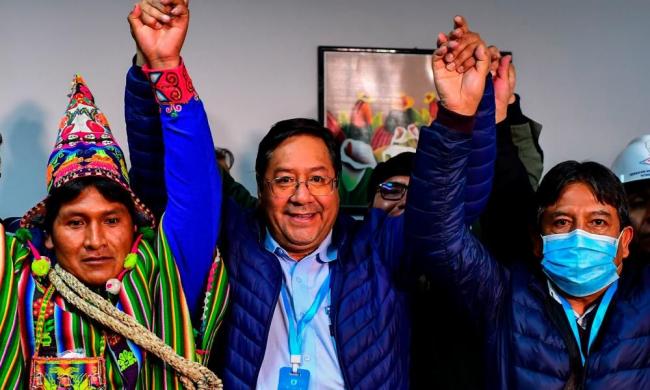 For the most part, the Biden administration continues the broad U.S. policy to seek paramountcy over the countries of the world. The U.S. government’s unilateral and illegal sanctions against more than 30 countries come alongside the promotion of regime change policies against countries such as Venezuela and Iran. Blinken’s statement about Bolivia indicates the continuities between the Trump and Biden administration.

No wonder that 17 countries—including Bolivia—formed a new group in 2019 to address the way in which some countries—such as the United States—have undermined the United Nations Charter. The Group of Friends in Defense of the Charter of the United Nations first met on the margins of the Non-Aligned Movement (NAM) meeting held in Caracas, Venezuela, in July 2019. This was before the coup in Bolivia. The pandemic disrupted the process of building the group, which resurfaced in March 2021 at the United Nations. “Strengthening multilateralism is essential,” said Venezuela’s Foreign Minister Jorge Arreaza. The members of the group include China and Russia, both permanent members of the UN Security Council, which gives heft to the process.

Mohammad Marandi, who teaches at the University of Tehran, told me that this group is an antidote to the “major problems that currently exist with the UN, such as the undemocratic nature of the organization that severely handicaps the Global South.” The U.S. and its allies, he said, are “increasingly ignoring the current global order and the UN Charter.”

Carlos Ron, Venezuela’s vice minister of foreign affairs for North America, told me that the group “is a decisive move in support of multilateralism and international law at the moment when humanity faces the most serious challenges in recorded history.” These challenges include climate change and increased inequality. From the standpoint of Venezuela and Bolivia, this group, Carlos Ron said, “is a mechanism to defend peoples against the threats of hybrid warfare,” which include sanctions and coups. “Diplomacy, cooperation and solidarity,” Carlos Ron told me, “are the only keys to move forward.”

Bolivia has decided to act against the coup makers. The U.S. government is now using that action to delegitimize the government of President Arce. Platforms such as TMS might turn out to be essential as a conduit for Bolivia to tell its story and not be suffocated by Washington’s information war, a vital part of the regime change strategy.

Anticopyright: Editorials and articles originated on TMS may be freely reprinted, disseminated, translated and used as background material, provided an acknowledgement and link to the source, TMS: Despite U.S. Dirty Tricks, Bolivia Is Finding a Way to Stay Independent, is included. Thank you.