The Spy Who Tried to Stop a War: Katherine Gun’s Courage of Conscience

21 Apr 2021 – Katherine Gun was 27 in January 2003, working in England as a translator and intelligence analyst for the British secret service.  At that time, the American and British governments were beating the drums for war against Iraq.

Iraq did not have weapons of mass destruction, but President George W. Bush and Prime Minister Tony Blair, echoed and amplified in the British and American mainstream news-media, claimed Iraq did have such weapons.  They argued that a preemptive attack on Iraq was therefore justified.  Bush and Blair sought United Nations approval for the war, knowing that such approval would give the war a veneer of legitimacy. 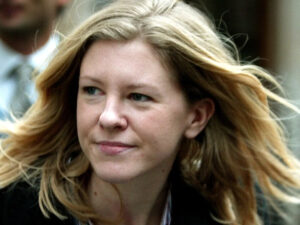 Risking prison and the ruination of her life, marriage, and career, Katherine Gun released a classified memo to the press.  The memo was from America’s National Security Agency (the NSA).  The memo was to GCHQ (Government Communication Headquarters, the British equivalent to the NSA), where Ms.. Gun worked in one of its specialized branches.

The classified memo asked England’s secret service to spy on U.N. Security Council diplomats, and to pass their findings to the National Security Agency.  That information could then be used by the Bush Administration to bribe and blackmail targeted U.N. diplomats to vote in favor of the war.

Knowing that she was breaching England’s Official Secrets Act, and thereby committing what the law calls “treason,” Ms. Gun hoped that publication of the secret memo in Britain’s press would force a public reexamination of the war’s legitimacy, and, ideally, prevent the insane loss of life and tragic suffering that war would surely entail.

Ms. Gun was well aware of the Anglo-American push for war against Iraq.  It was the major news of the day.  However, to Ms. Gun, it didn’t sound right – it didn’t feel right – as Iraq had long been enduring international sanctions and Anglo-American surveillance.  The claim that Iraq had WMDs didn’t make sense.  To check the validity of her intuition, Ms Gun informed herself further by reading books on Iraq’s recent history and its tensions with the West.

Thus, already suspicious of the Bush-Blair trajectory toward another act of international violence, Ms. Gun viewed the memo as confirming illegal activities in support of an illegal war.

She felt an instantaneous revulsion at the moral hypocrisy of so-called statesmen; she saw the memo’s explosive potential; and she felt an obligation to the British people to show them that they were being lied to and manipulated.

Throughout February, 2003, Gun’s memo did not appear in the press; then, in early March, it did appear, two weeks prior to the American start of the bombing of Iraq which President Bush called “shock and awe.”

Publication of the memo caused an international sensation.  GCHQ began an immediate hunt for the whistleblower.  Ms. Gun at first denied that she was the leak.  The following day, not wanting her colleagues to suffer suspicion and humiliation, she confessed.

Out on bail, it was eight months before Katherine Gun was charged with violating the Official Secrets Act.  Her defense team prepared a “defense of necessity” case on her behalf.

“Defense of necessity” means that a person has legitimately violated the law in order to prevent harm or loss of life.  (For example, breaking the speed limit in order to get a grievously wounded person to a hospital.)

In preparing a “defense of necessity” case, Gun’s legal team was putting the war itself on trial.  The prosecution would be forced to reveal the various Anglo-American “dirty tricks” designed to drum up support for the war.

On the first day of the trial, the prosecution dropped all charges, and Katherine Gun was a free woman.

Release of the memo did not stop the war, but it did cause the U.N. Security Council to deny approval for the war, depriving Bush and Blair of the U.N. blessing they were hoping for.

The Katherine Gun story was barely covered in America’s news media, yet it parallels in highly relevant and fascinating ways Daniel Ellsberg’s release of the Pentagon Papers to the New York Times in early 1971, Ellsberg risking prison to try to halt the ongoing slaughter in America’s Indochina holocaust (euphemistically called The Vietnam War).

To learn more about Katherine Gun’s odyssey, I recommend the 2008 book The Spy Who Tried to Stop a War, by Marcia Mitchell and Thomas Mitchell.  I also recommend the film based on that book.  Called Official Secrets and released in 2019, the film stars Keira Knightley.

On youtube, I recommend Amy Goodman’s interviews with Gun at “Democracy Now;” also on youtube, the “True Spies” podcast, Episode 14, “The Spy Who Said No.”

Katherine Gun has recently been nominated for The Peace Abbey Courage of Conscience Award.  In an interview for Vanity Fair (August 30, 2019), she offers this reflection as the fruit of her experience:

“In any walk of life, you can choose to do the right thing.  At the end of the day, we are accountable to our conscience.  We should think about that and remember that.”