The crossing witnessed the arrival of a number of injured Palestinians to receive treatment at Egyptian hospitals as a result of the Israeli air strikes on the Gaza Strip. 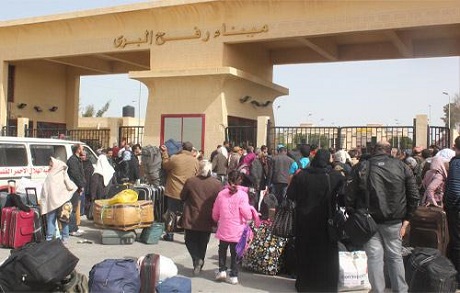 16 May 2021 – Egyptian authorities today opened the Rafah border crossing with the Gaza Strip and received a number of Palestinians injured in an ongoing Israeli aggression on the coastal enclave, state-run news agency MENA reported.

The opening of the Rafah terminal, which is the only crossing point between Egypt and Palestine’s Gaza Strip, comes in solidarity with the Palestinian people.

As many as 5,588 Palestinians – 1,225 in Gaza and 4,363 in the West Bank – have been injured since Monday as a result of the violent Israeli aggression, according to official Palestinian numbers.

A number of injured Palestinians crossed Sunday from the enclave into the Egyptian side, where they will receive treatment at Egyptian hospitals, MENA reported.

A number of equipped ambulances were there to transport the injured to hospitals after classifying their health conditions, it added. Also, administrative and medical teams have been sent to facilitate the passage of the wounded and their companions for treatment.

The almost week-long Palestinian-Israeli escalation has been deemed the most serious since 2014 as Hamas fired rockets at Jerusalem and Tel Aviv in retaliation for hostilities by Israeli police against Palestinian protesters near Al-Aqsa Mosque, Israeli air strikes targeting civilian buildings in the Gaza Strip, and most importantly the Israeli eviction of Palestinians from East Jerusalem’s Sheikh Jarrah neighborhood.

The action-reaction loop, which initially started on Monday­, brought the death toll in Palestine to 202 – 21 in the West Bank and 181 in Gaza, including 52 children and 31 women – health officials said, while Israel has reported 10 dead.

Egypt has been politically mediating in an attempt to reach a ceasefire. An Egyptian delegation – which met Tel Aviv and Hamas officials last week – has proposed a one-year truce for both sides that is to be monitored and coordinated by Cairo.

The Cairo proposal, however, was rejected by Tel Aviv.