A Case Study from Nicaragua 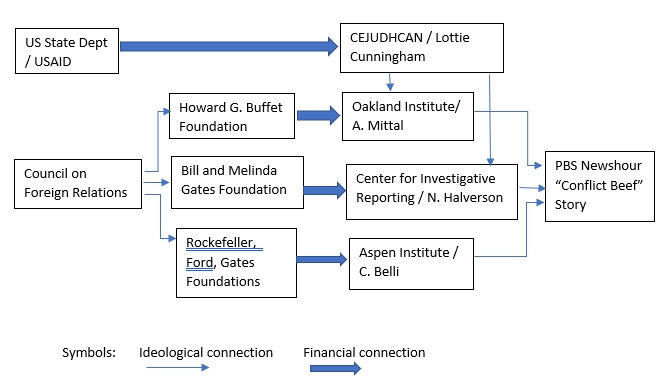 20 May 2021 – US foreign policy is increasingly promoted by billionaire funded foundations.  The neoliberal era has created individuals with incredible wealth and through “philanthropy”, they flex their influence and feel good at the same time. While these philanthropists can be liberal on some issues, they universally support U.S. foreign policy and the “free market”.  Because many of these super-rich individuals made their wealth through investments and speculation, most do not like a planned economy, socialized services beyond the private sector or greater government control.

These mega wealthy individuals, and the people who run their foundations, are often intricately connected to the U.S. foreign policy establishment. Grants are given to projects, campaigns and organizations which align with their long-term goals.  In this direct way, supposedly independent ThinkTanks and NGOs are influenced if not controlled.  There is much truth in the old saying, “He who pays the piper, calls the tune.”

Nicaragua is a good example.  For historical and contemporary reasons, Washington is hostile to the Nicaraguan government.  The Sandinista Front ousted the US supported dictator in 1979 and governed until 1990. Then, following a decade of US sponsored “Contra” war and economic sanctions, the Sandinistas were voted out of office. Next, after 16 years of neoliberal governments, the Nicaraguan people voted to return the Sandinistas to power in 2006. Since then, the Sandinista Front (FSLN) won the election with more support in 2011 and more again, 73%, in 2016.

Nicaragua has a capitalist economy, but the government provides many social services, including health care and education, along with community-based policing and an impressive 90% food self-sufficiency. Nicaragua maintains an independent foreign policy which sometimes aligns with Cuba, Venezuela and other independent movements in Latin America.

Nicaragua has made plans for a trans-oceanic canal.  Because this would compete with the Panama Canal and be independent of heavy U.S. influence, the United States does not approve. With the financial collapse of the canal’s Chinese investor, the plans have been suspended if not cancelled.  Regardless of whether the plan is implemented, the US foreign policy establishment and associated media is hostile to the Nicaraguan government for daring to plan this project.

US meddling in Nicaragua is thinly veiled behind the US funded “civil society”, a “new generation of democratic leaders” and an “ecosystem of independent media”.  In September 2016, a high USAID official told the House Foreign Affairs Committee that 2,200 youth had received leadership training.

U.S. governmental hypocrisy is quite astounding.  Imagine if Nicaragua (or Russia or any other country) trained thousands of US activists to “promote democracy” in the USA.

In December 2018, the US ratified the “Nicaragua Human Rights and Anticorruption Act” which imposes sanctions and commits the US to preventing Nicaragua receiving a loan, financial or technical assistance from US dominated financial institutions.

In August 2020, journalist Ben Norton at the Grayzone reported details of a new US AID “task order” called Responsive Assistance in Nicaragua (RAIN). The document “outlines plans for a US regime-change scheme against Nicaragua’s elected leftist government”.  In short, Washington is not just hostile but actively trying to undermine, destabilize and replace the Sandinista administration. 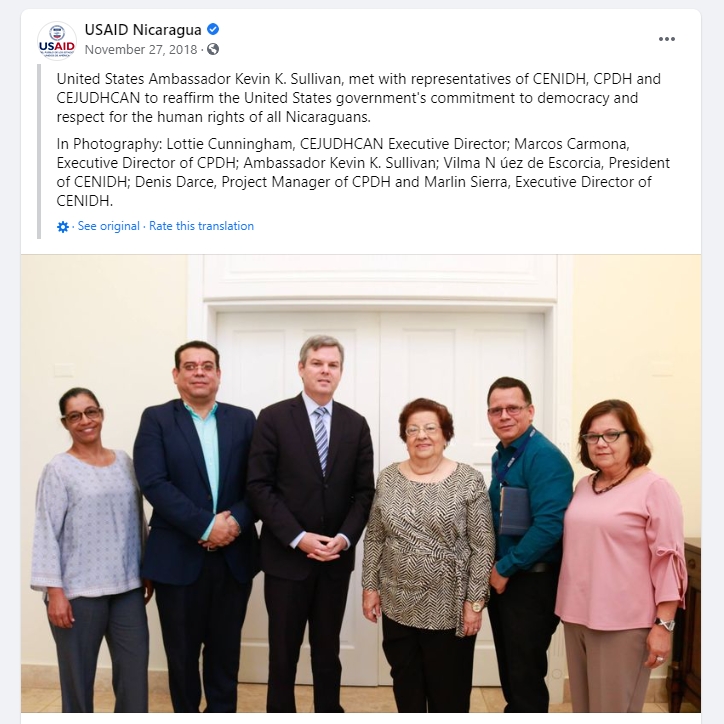 A key institution of the foreign policy establishment is the Council on Foreign Relations (CFR).  Its role and importance are analyzed in the book “Wall Street’s Thinktank”. CFR events and publications, including “Foreign Affairs” magazine, give a good picture of key foreign policy priorities and debates.

Hostility to the Nicaragua government is reflected in CFR reports and publications.

One important example is an article by Elliott Abrams. Abrams has been a major foreign policy official for forty years.  He was convicted of lying to Congress yet he is a Senior Fellow at the Council on Foreign Relations (CFR).  In September 2015 he wrote an article published at CFR titled “The Sandinistas Attack the Miskito Indians – Again”.  He ends the article with an appeal to environmental or human rights groups:

“The open question is whether anyone – groups defending the environment, or defending Indian rights or human rights more generally, or fighting against Sandinista repression – will help them.”

In the fall of 2018, the Oakland Institute received a grant of $237,294 for “Land Dispute Project – Nicaragua” from the Howard G Buffet Foundation.  This year Oakland Institute published “Nicaragua’s Failed Revolution.” The subtitle of the report is “The Indigenous Struggle for Saneamiento”, with “saneamiento” being the final step of the process toward regaining indigenous rights.

The funding for these reports came from foundations where the key players are interconnected with the foreign policy establishment. For example, Howard W. Buffet,  the former Executive Director at the Howard G Buffet Foundation, is a member of CFR.  Melinda Gates, co-chair of the Bill and Melinda Gates Foundation (BMGF), is a writer for CFR publications and speaker at CFR events.

We do not know if they were influenced by Elliott Abrams’ appeal, but the anti-Sandinista message was likely heard way or another.  Land disputes involving indigenous groups are widespread in the Americas, including North America.  Research and reports could be done regarding almost every country. But instead of researching and reporting on indigenous land conflict in Colombia or Honduras or British Columbia, the billionaire foundations funded reports on Nicaragua.

The Miskitu indigenous in Nicaragua are not new to conflict. During the 1980’s the CIA manipulated them to advance their proxy Contra army.  Many Nicaraguans died as a result.  Now, 35 years later, people such as Elliott Abrams are trying to use the Miskitu all over again. The Miskitu may have valid issues and complaints. But are the advocates seeking a solution or are they seeking to exacerbate the conflict? There is a big difference.

The United States is increasingly using sanctions and economic warfare to hurt those governments deemed to be “adversaries”.  Some right wing foreign policy advisors would like to amplify the economic damage to Nicaragua. Some would like to prevent the US from importing beef from Nicaragua.

Cattle ranching is a major part of the economy in Nicaragua. Previously Nicaragua exported lots of beef to Venezuela. But with the extreme economic hardships, exports have declined.  Nicaragua has helped filled the gap by exporting larger quantities of high-quality beef to the USA.

On 21 October PBS Newshour showed a 9 minute video about “Conflict Beef”. The documentary said the increase in Nicaraguan exports is “coming at a high cost for indigenous communities that are being run off their land to make way for cattle ranches”. This accusation, and the suggestion that perhaps Nicaraguan beef should not be imported,  was a core message of the video which merged journalism with activism.

Subsequent research including interviews with indigenous leaders from the area reveal that the PBS Newshour  report is fundamentally inaccurate.  Journalist John Perry, based in Nicaragua, gives details in the article Progressive Media Promoted a False Story of Conflict Beef from Nicaragua published by Fairness and Accuracy in Reporting. Some of the reported violence was made up; some was exaggerated. The claims of “genocide” are not credible.

The exaggerated and untrue accusations in the PBS report are based on four sources. Lottie Cunningham is an indigenous attorney who heads up the Center for Justice and Human Rights on the Atlantic Coast of Nicaragua (CEJUDHCAN).  Her organization is a US AID recipient and she is close to the US Ambassador to Nicaragua. The United Nations Human Rights Commission has issued press releases based soley on her accusations. Judging by this “Conflict Beef” report, her accusations are sometimes exaggerated and sometimes untrue.

Another source for this report is Anuradha Mittal of the Oakland Institute. The Institute received a grant of nearly one quarter million dollars for their research on Nicaraguan “land conflict”.

Much of their information came from the Oakland Institute report and the claims of Lottie Cunningham, a USAID grant recipient and recipient of the Lush Spring Prize sponsored by Lush Cosmetics. Recently published interviews with numerous elected indigenous leaders from Nicaragua’s autonomous zones indicate that Lottie Cunningham is viewed with skepticism if not hostility.  The leaders believe that her organization, Center for Justice and Human Rights in the Atlantic District of Nicaragua (CEJUDHCAN), does not represent the interests of indigenous communities and is actually promoting violence and publicity for personal gain.

Another journalist, Camilo de Castro Belli, appeared in the video.  He is the son of author and Sandinista critic Giacondo Belli and a “Central America Fellow” at the neoliberal Aspen Institute.  The Aspen Institute is funded by grants from the Rockefeller, Ford, Gates and other US philanthropy foundations.

Key allegations in the “Conflict Beef” story are untrue.  The beef for export comes from cattle that are NOT from the indigenous zones.  The cattle are individually tagged and regulated by the national IPSA (Institute for Agricultural Protection and Health) which is in turn audited by the US Dept of Agriculture. Nicaraguans are currently in discussion with European regulators in preparation for export there. This video, from one of the Nicaraguan beef producers,  gives a sense of the professionalism.

Even the introduction of the PBS video is untrue. They sensationally claim that a young Miskitu girl was shot in the face by someone “sending a message” to the community.  The girl was accidentally shot while playing with another youth who had his father’s gun.  This version is confirmed by the president of the local indigenous community who knows the family of the girl victim. The girl survived the incident, and the family accepted a bribe to fabricate the false story.

Another claim that “dozens of armed men attacked another Indigenous village in northeast Nicaragua, killing four people in the Mayangna community” is false.  A version of this same story was repeated twice in the Oakland Institute report and sent by Lottie Cunningham (CEJUDHCAN) to the United Nations Human Rights Council who dutifully issued a press release. This despite the fact the claims had been quickly exposed as false be the president of the Mayangna indigenous community.  But media quickly jumped on the story, reportedly after two phone calls from people and no verification.

When a government is targeted by Washington, as the Sandinista government clearly is, the media attitude seems to be “guilty until proven innocent”.

This story about “conflict beef” reveals how big foundations influence reports which promote the US foreign policy goals on Nicaragua:  to defame and economically punish those who are too independent.

Anticopyright: Editorials and articles originated on TMS may be freely reprinted, disseminated, translated and used as background material, provided an acknowledgement and link to the source, TMS: How Billionaire Foundations Fund NGOs to Advance US Foreign Policy Goals, is included. Thank you.