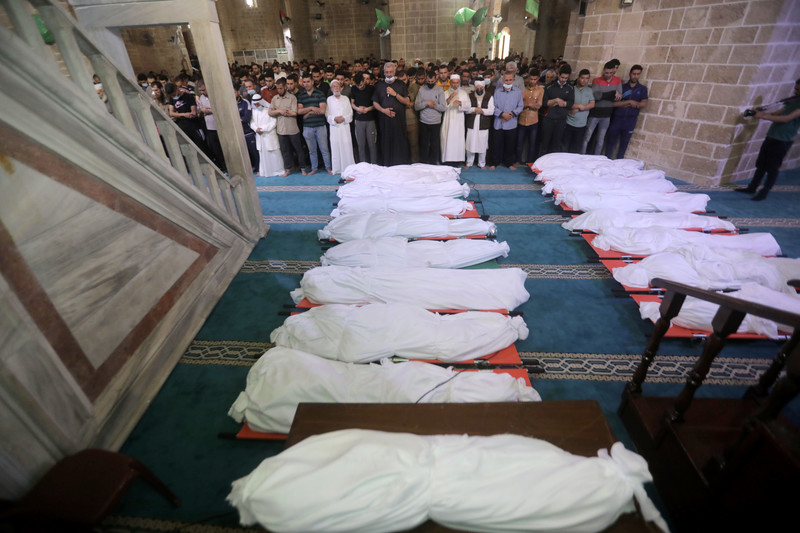 Mourners pray over the bodies of Palestinians killed in overnight Israeli airstrikes in Gaza City on 16 May.
Atia Darwish APA images

17 May 2021 – Israel in the early hours of Sunday [16 May] night obliterated multiple generations of families when it bombed their homes in Gaza.

Around 1 am, Israeli warplanes launched a savage bombing campaign lasting at least an hour, firing 50 missiles at the area surrounding al-Wihda street in Gaza City.

Without warning, the bombs hit residential buildings, bringing them down on top of those inside.

The death toll from the attack has risen to 43, including 18 children and 12 women. Fifty more were wounded.

Two prominent doctors were among the dead.

As of Sunday evening, rescuers were still searching for survivors under the rubble.

This has raised the death toll in Gaza since Israel’s bombing campaign began last Monday to at least 192, including 58 children and 34 women, according to the health ministry in the territory.

More than 1,200 people have been injured.

In the attack early Sunday, multiple generations of the al-Qawlaq family – at least 21 people – were killed. The youngest victim, Qusay Sameh al-Qawlaq, was 6 months old, and the oldest was 90-year-old Amin Muhammad al-Qawlaq.

Israel also bombed civic infrastructure, businesses and the main roads leading to the city’s al-Shifa hospital, according to Al-Mezan, a human rights group in the territory.

After bombing residential buildings in #Gaza, "Israel" bombed all the streets leading to Shifa Hospital, the largest medical facility in Gaza. Ambulance vehicles cannot leave/enter the hospital while tens of civilians are buried alive under the rubbles.#GazaUnderAttack pic.twitter.com/8R7V3voWGl

Abir Ishkinta, 29, was killed in the blast.

Their 4-year-old sister Lana Ishkinta was also found dead under the rubble.

Their father Riyad Ishkinta was pulled out of the rubble alive on Sunday.

His daughter Suzie Ishtinka was also reportedly pulled out alive after hours under the collapsed building:

As medical staff in Gaza cope with a surge of injured people, they have not been spared Israel’s onslaught.

Dr. Ayman Tawfiq Abu al-Ouf, the chief of internal medicine at al-Shifa hospital, died along with two of his children, Tala, 13, and Tawfiq, 17.

Dr. Muin al-Aloul, a neurologist, was also killed in the Israeli bombing.

Doctors mourned their colleagues on Sunday.

Five other members of the Abu al-Ouf family were also killed.

The Israeli bombing also destroyed a Médecins Sans Frontières clinic as well as an orphanage.

Last night, an MSF clinic in #Gaza where we provide trauma and burn treatment was damaged by Israeli aerial bombardment, leaving a sterilization room unusable and a waiting area damaged. No one was injured in our clinic, but people were killed by the bombing. pic.twitter.com/Dwol0EPXEr

As Israel continues its aerial and artillery bombardment of #gaza many MSF staff and patients have been forced to flee their homes for safety. The damage to our clinic shows no place in Gaza is safe. pic.twitter.com/m4yYn1Nm6x

Four members of the al-Ifrinji family were also found dead under the rubble, including two children.

TO READ THE FULL REPORT Go to Original – electronicintifada.net