Under Pandemic, UN Votes to Condemn Cruel and Illegal U.S. Blockade of Cuba—but There Is a Twist

184 Countries Vote in the United Nations to Condemn U.S. Blockade of Cuba—But As Usual, Only Two Countries Vote Against the Resolution: the U.S. and Israel.

While Conditions in Cuba Under the Blockade are Worsening—Potentially Worse than the Special Period—Cuba’s Biotechnological and Pharmaceutical Industry May Help Them Out of the Pandemic. 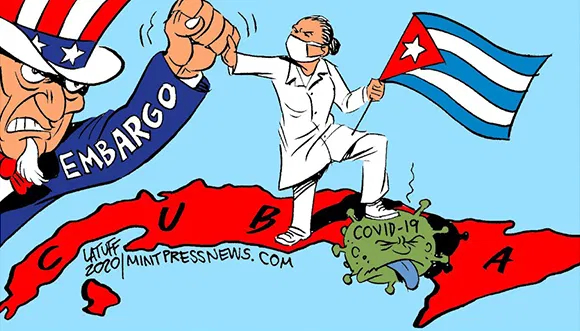 24 Jun 2021 – On June 23rd, 184 countries at the United Nations voted yet again to condemn the U.S. blockade of Cuba, with 3 countries abstaining and 4 not voting. Every year since 1992—2020 being an exception when the vote was not held given COVID restrictions—Cuba has introduced a resolution to end the blockade. And every year, only two countries vote against it: the U.S. and Israel, with Bolsonaro’s Brazil joining them in 2019. Notwithstanding the ongoing nightmare Cubans continue to suffer under the blockade, the focus on health care and their advanced biotechnological and pharmaceutical industry may help them out of the pandemic.

For over 60 years, the U.S. blockade of Cuba has not stopped the island-nation from pursuing its goals of living independently from neocolonial and neoliberal control, using its own national resources for the benefit of the Cuban people and instituting social programs like free universal health care and education.

Yet the blockade continues to stifle the Cuban economy and harm the Cuban people. But further, the policy quashes all the productive potential normal relations with Cuba would foster, even for Americans.

According to some sources, conditions in Cuba are now worse than in the so-called “Special Period” in the 1990s after the fall of the Soviet Union. Food shortages were so dire then that malnutrition led to an epidemic disease of blindness afflicting tens of thousands.

With Cuba now facing the worst phase of the COVID-19 pandemic, lifting the blockade—not to mention easening it with the stroke of a pen—would clearly be the most rational and humanitarian act.

The dire situation in Cuba is in great part the result of U.S. policy: isolate nations like Cuba who rid themselves of U.S.-backed dictators and foreign control of their assets. This serves not only to punish those who go their own way and reject neoliberal policies but also serves to showcase struggling, blockaded economies while misleading the public on the causes. The policy is aggressively pursued for fear that successful examples will inspire others to rid themselves of the shackles of the U.S. empire and plutocratic interests.

While Obama’s policy of engagement, among other remedies, renewed diplomatic relations and eased restrictions on travel and remittances to the island, Trump reversed that trend and issued unprecedented aggressive policies against Cuba culminating in its inclusion on the unilateral State Sponsors of Terrorism list.

On the campaign trail last September, Biden slammed Trump’s policies, calling them an “abject failure,” and promised that he would, if elected, “…reverse the failed Trump policies that inflicted harm on Cubans and their families.” Indeed, Cuba is no mystery to the Bidens. Biden’s wife, Jill, now First Lady, actually traveled to Cuba on an educational and cultural trip in 2016.

Will Biden Keep His Promise?

It is no surprise to seasoned CAM readers that Biden’s position seems to have evaporated under the pressures of U.S. electoral politics, particularly from the Cuban-American lobby that has kept Cuba locked in isolation for decades. While Biden has rescinded dozens of Trump’s policies, on Cuba he has remained silent. Of the 240-plus measures adopted by Trump to toughen the blockade against Cuba, Biden has not rescinded even one.

Pressures to get Biden to fulfill his promise are mounting in the U.S. and include Cuban-Americans. Organizations like Bridges of Love and other solidarity groups have staged rallies, protests and caravans nationwide in hopes of pushing the Biden administration to soften its strategy.

Dozens of nonprofit groups, from Oxfam to the DC Metro Coalition, have asked the U.S. to “…act as soon as possible to normalize relations with Cuba…” and lift the blockade on humanitarian grounds. Various leading think tanks, including the Council for Democracy in the Americas (CDA), the Washington Office on Latin America (WOLA) and the Cuba Study Group (CSG) have asked the new administration to restore Obama’s policy of rapprochement and critical engagement. The National Network on Cuba has produced a Hands Off Cuba Map! that can be clicked on to see the particular organizations around the U.S. working to end the blockade.

To defend the ongoing illegal and cruel blockade, Biden’s Secretary of State Antony Blinken ratcheted up the rhetoric at the 51st Conference of the Council of the Americas stating that Washington “…will defend the human rights of the Cuban people…” to which the Cuban Minister of Foreign Affairs Bruno Rodríguez responded: “If Secretary Blinken was interested in the human rights of the Cuban people, he would lift the embargo and the 243 measures adopted by the previous government…”

Cuban Permanent Representative to the United Nations Pedro Luis Pedroso Cuesta added: “All those measures remain in force today, and are a reflection of the unprecedented levels that the economic war against Cuba has reached, bringing about hardships of all kinds and material shortages in the daily lives of every Cuban.”

Pedroso continued: “Our challenges in terms of human rights, like those of any other country, are known to our people and our government and we will continue to work on their solution on the basis of our Constitution,” he said. “But Cuba is equally concerned about the human rights situation in the United States. Flagrant violations are committed here [in the U.S.] on a daily basis, which arouse concern within the international community.”

Pedroso issued an additional statement on Tuesday, June 22, before the vote:

“The entire world knows that the US blockade against Cuba is a genocidal and criminal policy, which really harms the Cuban people especially amid the Covid-19 pandemic…”

It is “…an act of genocide under the 1948 Convention for the Prevention and Punishment of Crime of Genocide, due to its declared purpose and the political, legal and administrative framework it is based on.”

Rodriguez’s and Pedroso’s statements are especially compelling given the pandemic. Maintaining a blockade on Cuba at this time—much less on any country—is particularly anti-humanitarian, especially when Cuba is currently facing the worst phase of the COVID-19 outbreak since the start of the pandemic.

How is Cuba supposed to battle the pandemic? Venezuela, for example, tried to acquire vaccines by actually paying for them; shockingly the remittances were rejected given the economic blockade on Venezuela.

The Cubans, however, are in a unique situation. Since the 1959 revolution, Cuba has focused on health care, among other social programs. They send more doctors around the world than the World Health Organization and have implemented programs like Doctor de la Familia which house doctors in communities around the island-nation in two-floor homes.

Typically, the doctor de la familia lives with his/her family on the second floor, and the practice resides on the ground floor. In addition to receiving patients at the local clinic, doctors and healthcare workers visit community neighbors in their homes and provide an overall more holistic service.

The Cuban government has made the obvious choice not to rely on foreign vaccines. In spite of the blockade, they are advancing their own vaccine development, testing, and delivery with their own advanced pharmaceutical industry which has exported vaccines for decades.

The Cuban biotechnological and pharmaceutical industry, under the coordination of the BioCubaFarma group, has built 14 organizatons with 78 manufacturing facilities operated by 21,785 employees. The Center for Genetic Engineering and Biotechnology and the Finlay Institute, part of BioCubaFarma, have produced five coronavirus vaccine candidates, two of which, Soberana 2 and Abdala, are particularly promising.

On Monday, BioCubaFarma announced that its three-shot Abdala vaccine had proved 92.28% effective against the coronavirus in last-stage clinical trials. Soberana 2, announced days earlier, has proven to be 62% effective with just two of its three doses. Both vaccines are expected to be granted emergency approval.

Cuba will likely be in a position to vaccinate its own population and further burnish its own scientific reputation by exporting vaccines against coronavirus. This will provide much-needed currency not to mention assist in the world-wide vaccination effort. Numerous countries, from Argentina and Jamaica to Mexico, Vietnam and Venezuela, are interested in buying Cuba’s vaccines. Iran started producing Soberana 2 earlier this year.

What You Can Do To Help

Get involved in the solidarity campaigns with Cuba listed above. There are many. One organization I worked with in the 1990s was Global Health Partners (GHP): They are particularly efficient and have been sending medicines and medical supplies to Cuba since the 1990s.

Now that the Cubans have potentially developed viable vaccines, they need syringes. Go to the GHP website and support them in getting syringes to Cuba.

The Cuban government is planning to produce 100 million vaccines for its population and to share with developing countries around the world. As GHP notes: “Over the past year alone, Cuba has sent 3,700 health workers, in 52 international medical brigades, to 39 countries overwhelmed by the pandemic. Cuba’s international medical brigades have treated patients and saved lives for the past 15 years in 53 countries confronting natural disasters and serious epidemics, such as the Ebola crisis in West Africa.”

In spite of Cuban advances in health care, biotechnology and pharmaceuticals, the blockade is a daily nightmare for most of the 11.3 million people on the largest Caribbean island-nation. While the pandemic is a deadly layer added to the suffering, the promise of change comes at a crucial moment for Cubans. Will Biden fulfill his promise to relax the blockade and join the rest of the world, or will he carry on with the old Cold War rhetoric against Cuba that has only harmed the Cuban people and exacerbated the anti-humanitarian U.S. image worldwide?

U.S. diplomat Rodney Hunter rhetorically told the U.N. General Assembly before the vote that ‘sanctions were one set of tools in Washington’s broader effort toward Cuba to advance democracy, promote respect for human rights and help the Cuban people exercise fundamental freedoms.’ It seems, given this latest U.S. vote at the United Nations, that the Biden Administration is not yet interested in fulfilling its promise to tear down the cruel wall.