Cry, the Bedeviled Country: I Weep for My Homeland of South Africa, As I Watch Its Disintegration from Afar 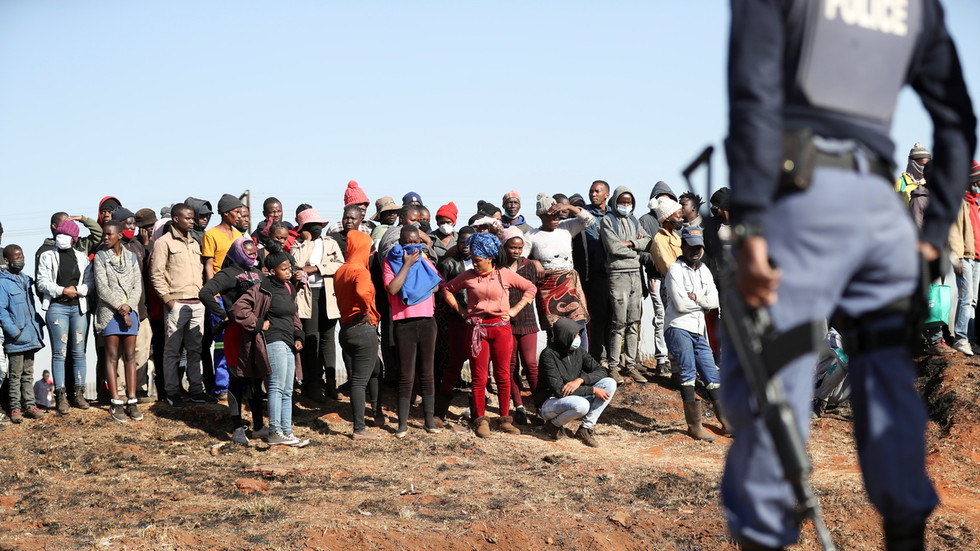 A police officer stands guard in front of protesters as the country deploys the army to quell unrest linked to the jailing of former South African President Jacob Zuma, in Vosloorus, South Africa, July 14, 2021. © REUTERS/Siphiwe Sibeko

17 Jul 2021 – Widespread looting and burning has killed over 100, and wrecked factories, shops and homes, with Indian and whites increasingly the target. Is the country I love, where I spent 30 years of my life, spiralling into racial warfare?

Many years ago, I was invited by Prince Mangosuthu Buthelezi to attend the Shaka Day celebrations in Natal. I was one of a handful of whites. Thousands of Zulus in their traditional garb, swayed, danced and sang praise songs to the great 19th-century warrior king, Shaka kaSenzangakhona, who made his people one of the formidable and feared powers in southern Africa.

Without the support of Chief Buthelezi, the leader of the Inkatha Freedom Party, Nelson Mandela would not have been released from jail. Gavin Relly, the former chairman of Anglo American, has said the Zulu leader was “the anvil on which apartheid was broken”.

But because he refused to join the African National Congress (ANC), due its Marxist underpinnings and his strong belief in “education before liberation”, Buthelezi and his supporters paid a heavy price, and he was frozen out of the highest echelons of power in post-apartheid South Africa.

This week, I watched in horror as my beloved homeland was transmogrified into an apocalyptic hell. The fruits of liberation before education were on full display, as looters and arsonists rampaged across the country. The tragedy was almost Shakespearean. Who could imagine that a nation would loot in order to express their rage at the jailing of the great Looter-in-Chief himself, former president Jacob Zuma?

Nelson Mandela gave the nation a gift: a non-racial constitutional democracy that enshrined freedom, equality and the rule of law. What we saw was the wilful torching of this gift – criminal behaviour emblazoned across the world’s screens. I was ashamed.

High rates of unemployment (70%-plus in many areas), poverty and ill health only partially explain the widespread manifestations of anger and anomie. But they are an insufficient explanation for this barbaric plunder of the economy. If they were, why would rioters loot a sex shop and a funeral parlor?

Revolutionary movements such as the ANC demand unfettered loyalty from the electorate for having defeated the enemy: apartheid. And that loyalty means turning a blind eye to the excesses of the ruling elite’s entitlement to the state’s resources, with which they buy themselves opulent villas, Ferraris and Bentley convertibles, and large farms while millions of the people they promised to set free live in ramshackle wood-and-corrugated-iron shacks in crime-ridden slums without toilets, jobs or hope.

But within the ANC, the ruling elite is not a monolith. The tribal divisions run deep. Zuma is a Zulu in a party that accords hegemony to the dominant Xhosa ethnic group. And this subterranean faultline has been the fatal flaw that, since Mandela departed frontline politics in 1999, has seen it struggle to remain united.

A mother in South Africa was forced to throw her baby from a building after it was allegedly set on fire by lootershttps://t.co/lBKZwCVjm8 pic.twitter.com/xFhlQsicn3

Under Mandela, a Xhosa, Zuma the Zulu could always be contained because of Mandela’s stature. The current president, Cyril Ramaphosa, however, has a much more difficult task reining in his predecessor and his considerable Zulu following, partly because he’s a member of the Venda ethnic group, a minor tribe from the northern regions of the country.

These tribal distinctions are further bedevilled by the political factions within the ANC, which were writ large with the jailing of Zuma. Contempt of court is a foreign concept to the masses, who are not ignorant of the party’s entrenched culture of corruption across the board. South Africa is bankrupt because of the looting of the state treasury for personal enrichment. In this regard, all ANC leaders are culpable.

Every week, another financial scandal erupts, with one of the latest being billions of rands earmarked for Covid vaccines going missing. This against the backdrop of excess mortality rates that suggest the virus has killed at least 160,000 in South Africa, making it the worst-hit nation on the continent.

That Zuma fleeced South Africa with the help of his businessmen chums, particularly the three Gupta brothers – all of whom protest their innocence, of course, and say the charges are politically motivated – is of no consequence to his minions, although the majority of South Africans were outraged by the scandal. What they demand is equal justice before the law. ANC officials who destroyed every state-owned enterprise have not been held accountable and are still walking free.

But Zuma’s followers have overplayed their hand with the wanton destruction of property and life. The image of a mother hurling her baby from a burning building set on fire by looters is seared into the global consciousness.

Aware that they have lost the sympathy both of the nation and of countries across the globe, Zuma’s ANC resorts to the Marxist playbook of turning on old opponents: white and Indian people. Deflection, after all, is the best form of defence. Propaganda messages abound online, urging comrades that “the revolution has begun” and they must take it “into the white areas and to the next level.”

In another video clip, filmed by a citizen journalist and shared on the social media app Telegram, an apparent ANC official in a rather sharp-looking suit, urges, “Once you are done with the looting, go to Indian areas. Go there and kill Indians and burn their houses. Once you are done with looting, go to white areas and kill them and burn their houses.”

While the provenance of some of these is uncertain, there’s no doubt that there are plenty of high-profile people inciting the violence, including Zuma’s own children and the notorious Julius Malema, of the anti-white, far-left Economic Freedom Fighters revolutionary group.

This inflammatory rhetoric of a race war, inciting the masses to mobilise against an ethnic minority, to destroy all vestiges of so-called white monopoly capital, has been countered by the spontaneous emergence of ad hoc multiracial militias, who have been patrolling their neighbourhoods armed with an array of weapons to keep would-be looters at bay.

President Ramaphosa deployed 74,000 troops during the Covid lockdown in 2020 to enforce regulations; today, as the country burns, there are about 25,000 soldiers on the streets – or at least that’s what the government claims. They are needed – the inept South African Police Service is not only incapable of protecting lives and properties, but some of its officers have joined in the looting themselves.

The newly installed King of the Zulus, Misuzulu KaZwelithini, has likened the ongoing violent protests in his region to a “suicide mission that will haunt the poor and vulnerable in the near future.”

Meanwhile, Ramaphosa has blamed the rioting and looting on “coordinated criminality.” This reluctance to call the violence what it really is, is emblematic of the president’s pusillanimous leadership since he took office.

My prayers go out to all my relatives and friends – black, white and of Indian origin – who still live in my former homeland. And I thank God that I no longer do.

Jani Allan is a writer and talk show host. She has written for the London Sunday Times, the Spectator, the Daily Mail and various other British publications. Her memoir Jani Confidential was published by Jacana Media. janiconfidential@jacanamedia.co.za

One Response to “Cry, the Bedeviled Country: I Weep for My Homeland of South Africa, As I Watch Its Disintegration from Afar”