“Never let the fear of striking out keep you from playing the game.”

Over the course of his career, Babe Ruth broke baseball’s most important slugging records including most years leading a league in home runs, most total bases in a season, and highest slugging percentage for a season. In all, Ruth hit 714 home runs—a mark that stood until 1974. Ruth was born on 6 Feb 1895 and was raised in a poor waterfront neighborhood in Baltimore, where his parents owned a tavern. Ruth was one of eight children born to the couple, and one of only two who survived infancy. 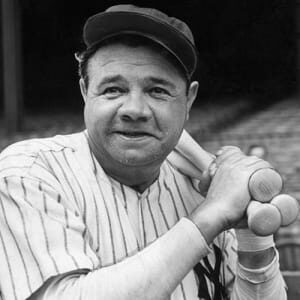 Anticopyright: Editorials and articles originated on TMS may be freely reprinted, disseminated, translated and used as background material, provided an acknowledgement and link to the source, TMS: “Never let the fear of striking out keep you from playing the game.”, is included. Thank you.