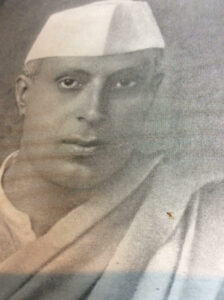 Was Jawaharlal Nehru (1889-1964) known only as the first Prime Minister of independent India? He was that, but much more. Born in a rich family, its members were largely in the profession of law as barristers and lawyers. Jawaharlal was sent to England by his rich barrister father Motilal Nehru to study at Trinity College, Cambridge University and the Inner Temple for Bar at Law degree.

Returning to India, he became involved in the freedom movement of the country against Britain led by Mahatma Gandhi, B R Ambedkar, Abul Kalam Azad and other stalwarts. Not surprisingly, he was imprisoned on many occasions in different prisons mostly in the northern parts of the country.

But imprisonment was a sort of blessing for him — it allowed him to read and write in the solitude of the prisons. He wrote several books — An Autobiography  (1936), The Discovery of India (1946), Glimpses of World History (1934) and several others, including Letters from a Father to his daughter who subsequently also became a dominant politician and PM of India. She was well known as Indira Gandhi. Later, after she was assassinated, her son Rajeev Gandhi also became PM (and likewise assassinated).

As mentioned earlier, Nehru wrote extensively and his Autobiography is not only about important struggles against the British but also captures some of his linguistic skills and his admiration for the physical beauty of the mountains and hills of North India.

I reproduce below some of his beautiful writings on these aspects as well as to his abiding love for his young wife Kamala (1916–1936) who was inflicted with a disease that kept her weak and ill and from which she died at a very young age. Kamala was moved to a cool place, Bhowali, near a well-known hilly place, Almora. He was taken out of prison to meet her. On leaving her bedside, he writes nostalgically,

In order to be near his ailing wife, he was moved out of the Naini Prison to be lodged in the Almora District Gaol. While he was being driven to Almora, he writes:

“I was glad to be back in these mountains, and as we sped along the winding road, the cold morning air and the unfolding panorama brought a sense of exhilaration. Higher and higher we went: the gorges deepened: the peaks lost themselves in the clouds: the vegetation changed till the firs and pines covered the hill sides. A turn of the road would bring to our eyes suddenly a new expanse of the hills and valleys with a little river gurgling in the depths below….

“Clusters of little mountain huts to the hill sides and round about them were tiny fields   made by prodigious labour on every possible bit of slope. They looked like terraces from a distance, huge steps that sometimes went from the valley below right up almost to the mountain top…. It was pleasant in the daytime as the sun rose higher, the growing warmth brought life to the mountains and they seemed to lose their remoteness and become friendly and companiable ….”

The description of his journey to Almora through the hills and mountains is quite accurate and attracts people to visit this mountainous range. On a personal level, I have been to Almora several years back and I can recall Nehru’s accurate description with joy.

It is no wonder that Jawaharlal Nehru was affectionately called Chacha Nehru (Uncle Nehru) by thousands of Indian children who celebrate his date of birth, 14 November, as Children’s Day.

Anticopyright: Editorials and articles originated on TMS may be freely reprinted, disseminated, translated and used as background material, provided an acknowledgement and link to the source, TMS: Thus Spake Jawaharlal Nehru, is included. Thank you.