Explaining 21st-Century Capitalism in a Way Everyone Can Understand

For those of you trying to understand economics and what capitalism is about, here is an excellent introduction. 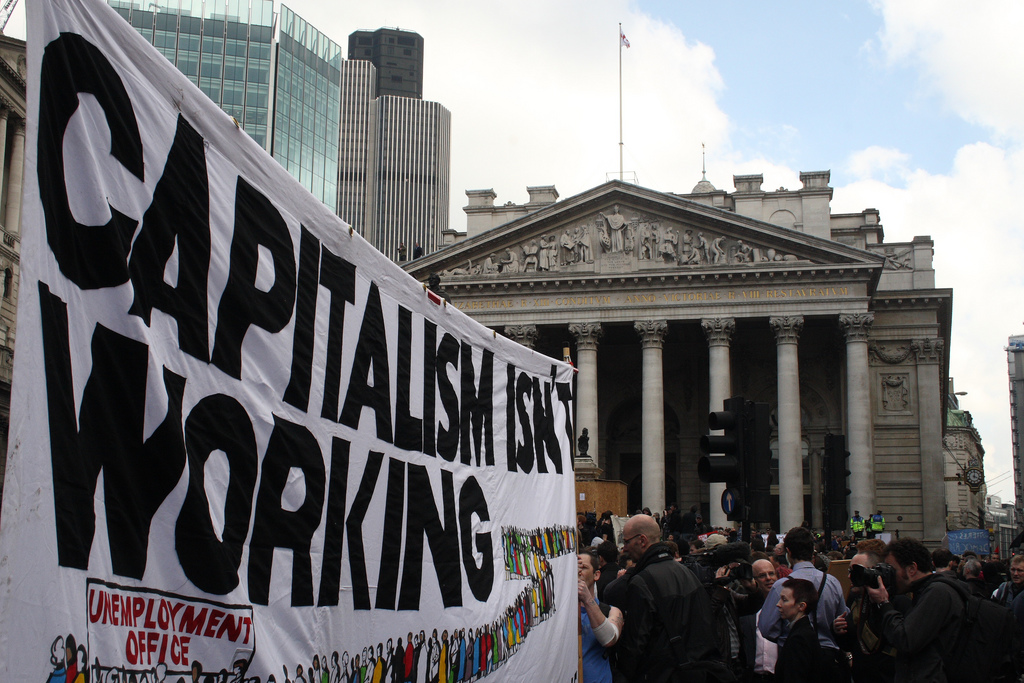 19 Aug 2021 – Now that so many people have realized that the capitalist system is riddled with problems, they want a clear explanation about the functioning of the system. They are dissatisfied and impatient with how school courses, politicians’ statements, and mainstream media treat the subject. Basic economics literacy is notoriously low in the United States even as its citizens show great interest in the financial aspects of their lives. So this short article aims to present the system’s essentials.

Capitalism is just one particular way of—a system for—organizing the production and distribution of goods and services. It differs from other systems such as slavery and feudalism but also shares some similarities with them. Capitalism, like slavery and feudalism, divides those engaged with the production and distribution of goods and services into two groups, one small and the other large. Slavery had masters (few) and enslaved people (many), while feudalism divided the groups into lords (few) and serfs (many). Employers are capitalism’s smaller group. They control, direct, and oversee the economic system. The employers use production and distribution to grow their wealth. Capital is wealth engaged in self-expansion. As the systemic agents who are socially positioned to perform that expansion, employers are capitalists.

The key point to grasp here is that the value added by the productive workers is significantly more than the value of the wages paid to them by their employer. For example, an employer may agree to pay a productive worker $20 per hour because—and only because—during each hour, that productive worker’s labour adds more value than $20. That key difference between value added and value of the wage payment is often called the “surplus value.” The capitalist employers receive (or better, take) that surplus value and withdraw from it a portion that they call “profit.”

The simple arithmetic of capitalist production can clarify its structure. First, the value of used-up means of production plus the value added by productive labour equals the total value of the output. The employer receives, owns, and sells that output in the market. Second, the excess of the value added by productive labour, over and above the value of the wages paid to the productive worker, provides employers with the surplus value. Part of that surplus value is used by employers to hire unproductive workers and to provide the conditions that enable productive workers to generate that surplus value. Included in these conditions is the interest paid to creditors who lend to the capitalist and the dividends paid to those who purchased shares in the enterprise.

The rest of the surplus value is what capitalists call profit. They use profit to grow their enterprises and support their own levels of consumption. In the modern capitalist corporation, the capitalists are the boards of directors who retain the profits in their hands and use them chiefly to grow the corporation and enable enhanced consumption by leading corporate officials (such as CEOs) as well as directors.

Capitalists get surplus value while employees get wages or salaries. That difference is crucial. Because employers occupy the dominant decision-making position in workplaces (enterprises), they use that position to ensure that enterprises produce profits as their first priority, their “bottom line.” Employers seek to reduce, as far as possible, the wages or salaries they need to pay to hired workers, both productive and unproductive. The more they repress wages or salaries of productive workers, the more surplus value they can take. The more they repress the wage or salaries of unproductive workers, the greater the share of the surplus they can take in profits.

Capitalism’s high priests—the professional economists—spin the tales (they prefer to call them theories) that justify the system. Thus they seek to persuade us that capitalists’ “profit maximization” achieves the greatest efficiency, economic growth, and the greatest good for the greatest number. We are to believe that the self-serving (profit-driven) behaviour of the employer class is, magically, the best for employees. In parallel fashion, earlier priests insisted that slavery and its self-serving masters were the best possible social arrangement for enslaved people. The priests during feudalism likewise praised it and its self-serving lords as the best possible social arrangement for serfs.

Because profit maximization serves capitalist employers, mainstream economics celebrates profits. In recent decades, that mainstream borrowed from mathematics the abstract notion (model) of a simplified system in which maximizing one aspect of it automatically maximizes many of its aspects. They then insisted that such a model captures (adequately represents) how capitalism works. Don’t be fooled; it does not. The mathematical model is simple, but capitalism is not. Maximizing and taking the profits out of each capitalist enterprise is how capitalists accumulate wealth. That is good for them but not at all for the rest of us. Keeping profits away from employees keeps them needing employment from capitalists. That too is good for employers. The profit system reproduces capitalism over time by reproducing the capitalists at one end and the workers needing jobs at the other. Capitalists and workers have never been equal beneficiaries of the system.

The market is another institution capitalism utilizes to reproduce itself. Markets had existed long before modern capitalism arose to become today’s globally dominant economic system. Slavery and feudalism had markets, but not in a unique way and not to the extent that capitalism does. Capitalism inserts the market into the core relationship between the system’s two major positions: employer and employee. The employer purchases the labour power of the employee from the latter (who owns it). In contrast, enslaved people were purchased in markets, but their labour power was not theirs to sell. Neither serfs nor serf labour power was purchased by feudal lords. Only when slavery and feudalism declined did some markets emerge for labour power and, thereby, signal some transition toward capitalism.

For capitalism, markets provided the means to secure its crucial ratio: the difference between the value paid for labour power (the wage) and the value added by the labourer’s work effort. That difference is the prerequisite for surplus value to be produced by the productive labourer and then appropriated and socially distributed by the capitalist.

Profit maximization and markets were always carefully limited and designed to serve the reproduction of capitalism. That is how markets evolved once the capitalist organization of production and distribution displaced the systems of slavery and feudalism that preceded it. Those other systems had either rejected markets or else shaped markets to reproduce those different, non-capitalist systems. Only a narrow, ideological fundamentalism raises markets, profits, or capitalism itself to a status above history as if any of them had the power to stop the flow of change.

Capitalism’s profit and market systems do not represent a suprahistorical absolute of maximal efficiency or optimality (favorite words in mainstream economics). Let’s remember that previous economic systems always spawned powerful ideologies insisting that they too were permanent, optimal “ends of history.” That alone ought to have imbued contemporary economists with some self-critical disciplinary consciousness. Instead, most of these economists merely advanced yet another set of absolutist claims on behalf of capitalism. Mainstream economics has had great difficulty including any such self-criticism. Capitalists’ demands for ideological loyalty from their workers may have played a role in that difficulty.

History has not stopped. Every other economic system in human history was born, evolved, and ceased to exist at some point. The most reasonable expectation is that capitalism, having been born and evolved, will also cease to exist one day. Human beings have often been impatient with the economic systems they had and eager for something better. The number of people feeling that way about capitalism is rising globally. Clarifying the basics of capitalism, which is to be superseded, can help move society forward now.

Richard D. Wolff is professor of economics emeritus at the University of Massachusetts, Amherst, and a visiting professor in the Graduate Program in International Affairs of the New School University, in New York. Wolff’s weekly show, “Economic Update,” is syndicated by more than 100 radio stations and goes to 55 million TV receivers via Free Speech TV. His three recent books with Democracy at Work are The Sickness Is the System: When Capitalism Fails to Save Us From Pandemics or Itself, Understanding Marxism, and Understanding Socialism.

This article was produced by Economy for All, a project of the Independent Media Institute

Anticopyright: Editorials and articles originated on TMS may be freely reprinted, disseminated, translated and used as background material, provided an acknowledgement and link to the source, TMS: Explaining 21st-Century Capitalism in a Way Everyone Can Understand, is included. Thank you.