The Other 9/11: Salvador Allende and Chile 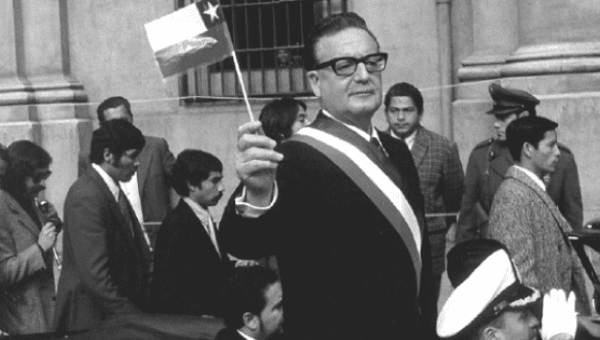 11 Sep 2021 – On September 11 the world  rightly pays homage to the nearly 3000 victims of the horrible 9/11 attack in the USA. However, on this day we should in addition also remember the perhaps even higher number of victims of the US-engineered military coup in Chile on September 11 1973 which also resulted in the highly tragic and widely mourned death of one of the most sincere and democratic leaders of Latin America—President Salvador Allende.

Before this coup , Chile had enjoyed a well-deserved reputation as a country of strong democratic traditions with regular elections and stability for decades. Democracy had survived here in the middle of several coups in Latin America. This was further strengthened with the election of Allende as President  in September 1970 with a socialist pro-people agenda.

Allende was earlier a public health physician who emerged as leader of the Socialist Party. He joined hands with other left oriented groups to form the Popular Unity Government. Determined to use natural resources of the country to help the poorer people, this government nationalized copper mines and went ahead with land reforms.

This agenda was strongly disliked by the Nixon –Kissinger regime in the USA known for its very aggressive foreign policy. Earlier strong efforts had been made by the USA and its local allies to somehow prevent Allende’s election, using legal as well as illegal methods.

Unfortunately these forces refused even to accept the democratic verdict and unleashed a series of actions aimed at subverting the Allende government. An undeclared economic blockade of sorts was declared towards Allende-led Chile. A CIA telegram to its local station uncovered later stated—it is “firm and continuing” policy that Allende must be overthrown while ensuring that “ American hand be hidden.”

Chilean military officers regularly visiting the USA for training proved to be important contact points. Heavy weapons including missiles were arranged to be available to military units likely to join the coup. Several efforts were made to disrupt economy and then channelize the resulting discontent into opposition  to the Allende government . Several strikes were instigated and added to the chaos.

In 1971 Fidel Castro made a long, 4 week visit to Chile in the course of which he is believed to have advised a lot of caution . The next year Allende returned the visit by spending time with Castro in Cuba. This and the refusal of Allende to oblige powerful US corporate interests led to more hostility against him and his government.

In June 1973 several rebel tanks advanced towards the Presidential palace but this  coup attempt was foiled. The second attempt starting on September 11 was planned more extensively and Allende found himself cornered in the Presidential palace. Still he strongly refused to accept an offer of escaping to exile and decided to fight on till the end.

With US help the rebels had managed to assemble great military strength. This was one of the few coups where even the Air Force was used to bombard the President’s residence.

With both the Presidential Palace and the radio station being bombarded, President Allende made his famous farewell speech. He started by saying that this would be his last address to his people, conveying immediately the seriousness of the situation. He then announced—I am not going to resign! Placed in a historic transition, I will pay for the loyalty to the people with my life. And I say to them I am certain that the seeds we have planted in the good conscience of thousands and thousands will not be shriveled.”

He continued, “ They have force and will be able to dominate us,but such processes can be suppressed by neither crime nor force.  History is ours, and people make history.”

President Allende was keen in this hour of crisis  to warn his people of its roots—“ foreign capital, imperialism, together with the reaction, created the conditions in which the armed forces broke the tradition.”

With bombs and bullets roaring around him, Allende declared—“Long live Chile! Long live the people! Long live the workers! These are my last words, and I am certain my sacrifice will not be in vain.”

Allende died soon after. Some accounts say he died fighting, while others say that to avoid capture he took his own life in the last stage of the battle.

Given the enormity of the attack including bombing by Air Force, the relatively much smaller force guarding the President fought extremely bravely,but the unequal battle was over before the evening.

This was followed by military rule . Several thousand were killed, ‘disappeared’, and even more were tortured in the most cruel way. In Nazi type tortures, doctors were employed to somehow keep torture victims alive until torture could start all over again. The number of the imprisoned crossed the hundred thousand mark within 2 or 3 years. Those known to have leftist inclinations were most marked for imprisonment, torture or death. Special caravans of death went around the country hunting for targets.  Augusto Pinochet who took over Chile after some time ( he was one of the key players in the coup) emerged as one of the most cruel dictators of all times who also threw upon the doors for foreign capital and plunder.

Historian Peter Winn has called this one of the most violent episodes in the history of Chile and pointed to the extensive evidence of US complicity. A US intelligence report in 2000 prepared at  the direction of the National Intelligence Council  also admitted that the CIA was aware in advance of coup plotting and plotters, had intelligence collection relations them, was involved in an earlier  coup effort in 1970 and actively assisted the military junta which took over after the death of Allende.

Hence it was that the pleasant and peaceful land of Chile was transformed soon into a land from where the most frequent reporting was increasingly in the context of disappearances and tortures and death squads.

Bharat Dogra is Honorary Convener, Campaign to Protect Earth. His recent books include Planet in Peril and Protecting Earth for Children.