The Group of 21 was a hastily assembled NPO of Japanese and international community friends organized in Kyoto, Japan in the late spring of 1997. Our goal was to assemble 21 youths, ages 1 to 21, from 21 different countries, to take a compelling group photograph, and then to run a global postcard campaign (long before the Internet was an everyday reality) to reduce global warming. We planned to use the postcards from different countries to support the COP3 Global Warming Conference scheduled for December of that year by presenting the Delegates with an inspiring welcoming campaign to Kyoto.

The Group of 21 Motto was “Remembering the Future“ 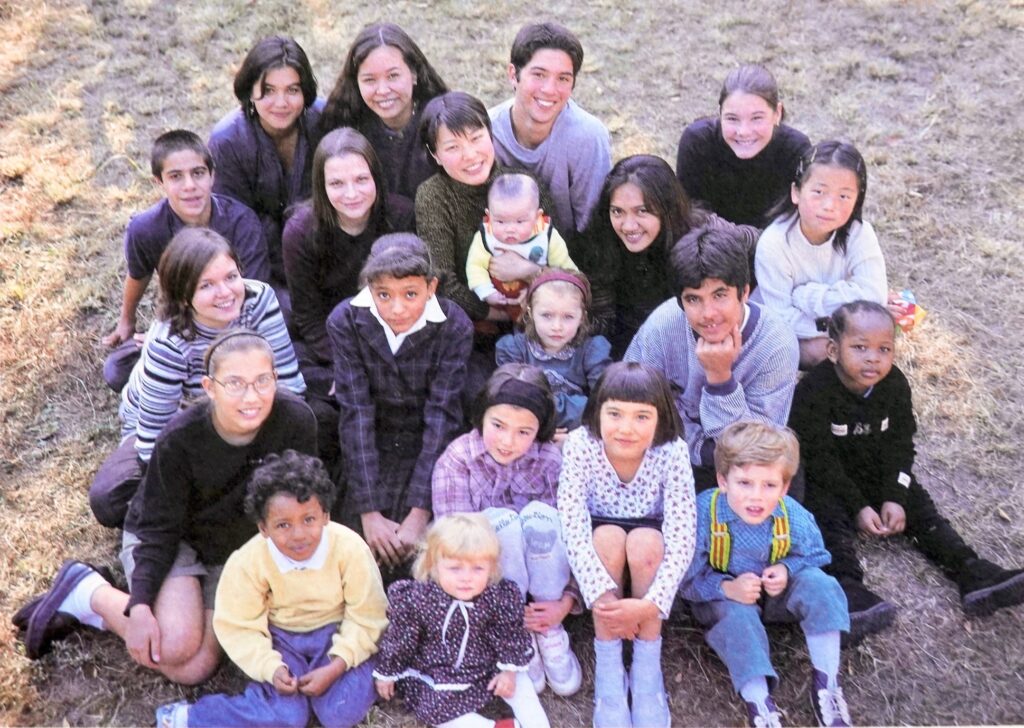 With no funding, except for small but numerous contributions along with the organizers sharing the costs, we were able to accomplish our goal. The youth were assembled from the countries in the Kansai area of Japan (Kyoto, Osaka, and Kobe). The youngest was a Chinese infant; the eldest was a Japanese university graduate holding the baby in her lap as can be seen in the center of the group.

Throughout the six months of our campaign, over 12,000 postcards were received from over 70 countries in various languages, with many being hand-drawn images by young individuals reflecting on global warming. A ceremony to present 50 ribbon-wrapped collections of the postcards was held in the center of Kyoto at the spacious front of Heian Shrine on the day before the opening of the conference. Delegates to the COP3 Conference were invited to attend the ceremony, along with the Japanese and international press. A diverse group of the conference Delegates attended and each was given a bundle of postcards by two youths at a time, one elder the other younger. The next day, most major Japanese and English-language newspapers in Japan carried photographs and stories of the presentation on their front pages.

On the last day of the conference, three elder youth leaders attended the conference with some of the organizers. They were able to meet with then-U.S. Senator John Kerry. Senator Kerry was sincerely gracious, considerate, and understanding in allowing each of the three young women to explain their sincere appeals. Accepting a packet of the postcards, he asked for one more, and went on to say, “I’ll give this packet to Vice-President Gore on our flight back to the U.S. The other packet, I’ll keep for myself.” (Al Gore was a keynote speaker at the conference.)

The conference ended successfully in the early morning hours of December 11th with a last minute agreement recognized by the whole convention as The Kyoto Protocol, the first global treaty on global warming. Subsequently, the agreement was signed by 192 parties (countries). President Bill Clinton signed the agreement shortly before he left office in 2000. After becoming the next President, George W. Bush, quickly nullified the agreement stating, “It was not good for the U.S. economy.”

Al Gore went on to win the Nobel Peace Prize for his work on global warming through his film, “An Inconvenient Truth.” John Kerry is currently the U.S. Special Presidential Envoy for Climate. Is this an interesting coincidence? Perhaps. But such things happen when the time is ripe for achievement and a buzz of possibilities is in the air. We hope that such an atmosphere and results may transpire at the current COP26.

The current situation and status of the youthful members of The Group of 21 is unknown; they’ve gone forward to live their futures under an increasingly visible threat of devastating forest fires, fierce typhoons, and extensive flooding and drought. Now that they are 24 years older (with the infant now being 25, and the eldest 45), it is certain that their concerns on the global crisis have grown with each passing year, as is true with the countless others worldwide.

With this remembrance of the Kyoto Protocol agreement, it seems time, once again, for humanity to sit up, take full notice, and “Remember the Future.” We believe it must, and it will. Our expressed thoughts convey memories of these positive energies to all members of the UN Climate Change Conference (COP26). We trust your results will resonate as a widening wave of collective and cooperative action, a wave that will greatly reduce the current growing and dangerous dissonance of our globally shared home.

With sincere appreciation to Lisa-Mahoney Beltran, the photographer whose image appeared as the back cover of Kyoto Journal #36

Comments on this article through TMS (Join the discussion) and dissemination through social media are welcome and appreciated.

Now it’s on to Glasgow, and let’s move forward together from there.

Anticopyright: Editorials and articles originated on TMS may be freely reprinted, disseminated, translated and used as background material, provided an acknowledgement and link to the source, TMS: A Message of Encouragement to Delegates of the UN Climate Change Conference (COP26), is included. Thank you.