Approved in Brazil, Argentinean GM Wheat Advances: Warnings and Rejections of an Unprecedented Experiment in the World 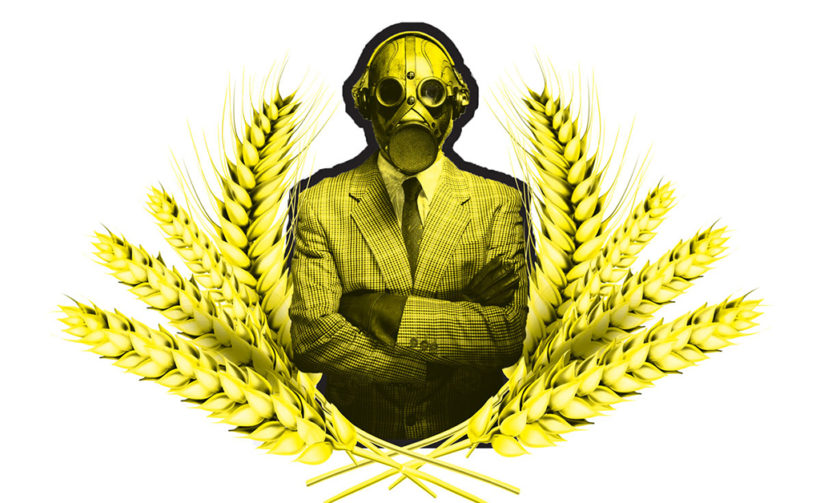 16 Nov 2021 – The Brazilian biosafety agency has approved the purchase of GM wheat produced in Argentina by the company Bioceres, the last step needed to authorise its commercialisation. The company had already reported that it had planted 55,000 hectares of this variety in the country. The decision unleashes effects that are yet to be seen: not only socio-environmental movements and more than 1,400 scientists denounce that this variety is resistant to a herbicide 15 times more toxic than glyphosate, but even the Mesa de Enlace warned the government as “inevitable” that this wheat “generates a process of contamination of non-genetically modified wheat”. There is also rejection in the Brazilian chain itself. Voices, impressions and causes of an unprecedented measure in the world.

“It is a disaster, and this speaks of the double complicity between Argentina and Brazil in going out with a monster that nobody wants. Carlos Vicente is a member of the organisation Grain and this is how he defines to lavaca the news that began to circulate this Thursday morning from a Reuters Agency cable: the National Technical Commission of Biosecurity of Brazil (CNTBio) approved the request to authorise the sale in that country of flour derived from transgenic wheat, manufactured by the company Bioceres, which organisations describe as “much more toxic” than glyphosate because it is resistant to glufosinate ammonium, which is banned even in the European Union.

The Brazilian agency’s approval was the last step to enable commercialisation. Brazil is the country to which 40% of Argentine wheat exports are destined. “This is the first GM wheat that has the possibility of being commercialised in the world and thus being present in our bread and many of our basic foods together with the agrotoxins with which it will be fumigated,” denounced socio-environmental organisations and movements grouped in the Socio-environmental Platform, which warned that at least 55,000 hectares have already been planted in seven provinces, although it could be more. Vicente: “When we first denounced it, we said there were 25,000 hectares, because it was a figure that came from the Ministry of Agriculture, but Bioceres presented a report to the New York Stock Exchange in which they talk about 55,000 hectares. This is extremely serious because it is an enormous quantity of tonnes of wheat that will end up contaminating the wheat chain before it settles”.

The rejection is not only from socio-environmental organisations and movements. “It is hard to understand the reason for making and authorising such a large volume of wheat production that cannot legally be marketed,” said the four rural organisations that make up the Mesa de Enlace (Sociedad Rural, Federación Agraria, CRA and Coninagro) in a statement to the Minister of Agriculture Julián Domínguez: “Such a high level of production makes it really impossible for the official authorities to control it, which is why it is inevitable that a process of contamination of non-genetically modified wheat will be generated.

The concern of the production chain is expressed in data:

This concern is reflected in the fact that some mills are already stipulating in their clauses that the purchase of cereals should be “free” of HB4 wheat.

Reuters also reported on threats by Brazilian mills to stop buying Argentine wheat. “Argentina does not have the capacity to separate this wheat from conventional wheat,” Vicente points out. “As a result, exports to Southeast Asia and the European Union will also be rejected and will cause commercial problems. The production chain is currently seeking to identify the fields where production is taking place, because Bioceres has not made this information public. Neither did the Ministry of Agriculture. And this is extremely serious.

It is a methodology of both corporations and governments that hide the information from the families who will be paying for this product that has been questioned around the world, without it seeming that they even have the right to know what kind of toxins and GMOs they will be feeding their children, an issue that science is warning about.

The approval of the Brazilian safety agency opens a new scenario. “There is an ongoing legal action by agroecological producers in the province of Buenos Aires and they are going to ask for a precautionary measure,” Marcos Filardi, a lawyer specialising in human rights and food sovereignty, told lavaca. He also mentions the collective action “Giménez, Alicia Fanny y otros” against Monsanto, the national government and others, a lawsuit representing the entire Argentinean people for the damage caused by glyphosate: “The cases in Argentina and their impacts are being publicised there. A ban on wheat was also requested and the prosecutor involved in the case asked for its suspension”.

Fabián Canda, prosecutor in the Civil, Commercial and Contentious-Administrative Federal Court N°8, ruled that resolution 41/2020 of the Ministry of Agriculture should be suspended “due to the serious flaws in its justification and the danger to the environment and human health that the distribution of the GM cereal would imply“.

As MU published in its 135th edition, GM wheat is not promoted by Monsanto-Bayer, nor Syngenta-ChemChina, nor Corteva (merger of Dow and Dupont).

The promoter is Bioceres, an emporium presented as “national”, made up of fifty agribusinessmen, among them the millionaires Hugo Sigman (president of the Insud Group, with a presence in forty countries, from pharmaceutical laboratories to the media), Gustavo Grobocopatel (the so-called “king of soya”) and Víctor Trucco (honorary president of Aapresid, a chamber that brings together agribusiness entrepreneurs and promoters of GMOs in Argentina). Bioceres is based in Rosario, is listed on the New York Stock Exchange, and advertises that it has “strategic alliances with world leaders such as the seed companies Syngenta, Valent Biosciences, Dow AgroSciences, Don Mario and TMG”.

“Don’t mess with our bread”

The so-called “HB4 wheat” variety had already been introduced in November 2018. Two years earlier, a dozen social organisations (Cátedra de Soberanía Alimentaria de la UBA, Foro Ecologista de Paraná, Acción por la Biodiversidad, among others) had launched the campaign “No se metan con nuestro pan”, where they stated: “We know that GMOs are a threat to biodiversity, to the environment and to the health of all. We know that approvals and controls in Argentina are not very serious. But this is worse. We do not want GM wheat or bread. We demand to know what we are eating.”

This transgenic variety was coined in Santa Fe by Raquel Chan, a professor at the National University of Litoral (UNL), the Institute of Agrobiotechnology of Litoral and the Conicet, and gained public notoriety when she developed a drought-resistant soybean. Former president Cristina Fernández de Kirchner and the then science minister, Lino Barañao (who later became a Macrista minister), mentioned it as an example of productive science for the country, demonstrating the absence of the rift that usually exists in these matters that harm society, its economy and its health.

Meanwhile, more than 1,400 Argentine scientists published an Open Letter to the National Government warning about the dangers of this new GMO: glufosinate-ammonium, which, according to the FAO, is 15 times more toxic than glyphosate, in a country where more than 525 million kg/litres of pesticides are already used per year (around 12 litres per inhabitant, the highest rate in the world).

Everything indicates that the rejections will continue, both in Argentina and Brazil, as actions are planned to take the concern about the approval to a mass level. Vicente: “In Brazil they don’t want it, not only the social movements we have worked with, but also the wheat chain”.

And he closes: “There is no justification, except for the whim of a corporation”.