9 Dec 2021 – While governments and human rights organizations were occupied with the farce of the coup junta’s trial of Aung San Suu Kyi and the expected guilty verdict on 6 December 2021, the junta’s back-to-back acts of terrorism have not been reported in the ways they deserve nor have they received worldwide scrutiny and condemnation. 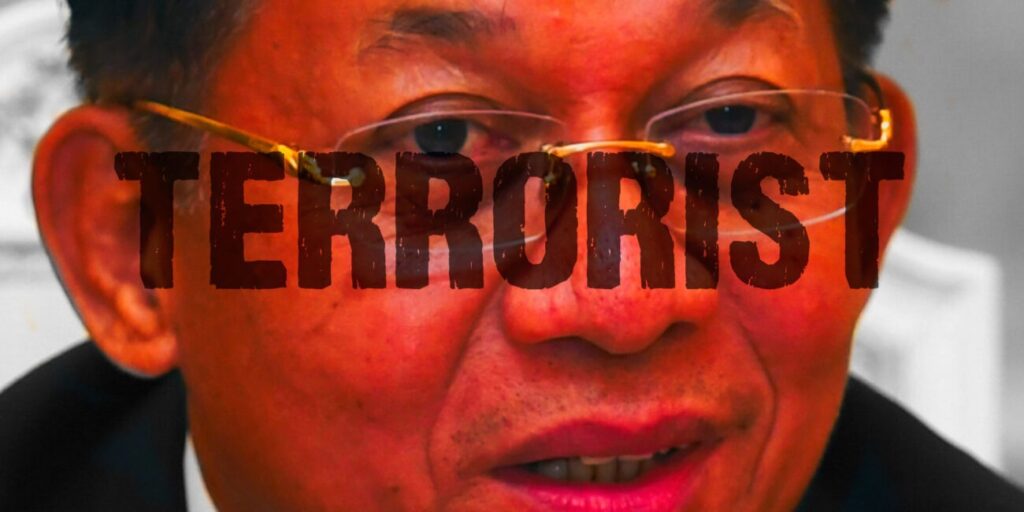 The State Administrative Council – renamed Caretaker Government – of Myanmar headed by the coup leader Min Aung Hlaing (“Ma Aa La or Aye Loe” as he is popularly nicknamed by the Burmese public) has been engaged in acts of terrorism – not simply war crimes and crimes against humanity.

While governments and human rights organizations were occupied with the farce of the coup junta’s trial of Aung San Suu Kyi and the expected guilty verdict on 6 December 2021, the junta’s back-to-back acts of terrorism have not been reported in the ways they deserve and nor have they received worldwide scrutiny and condemnation. 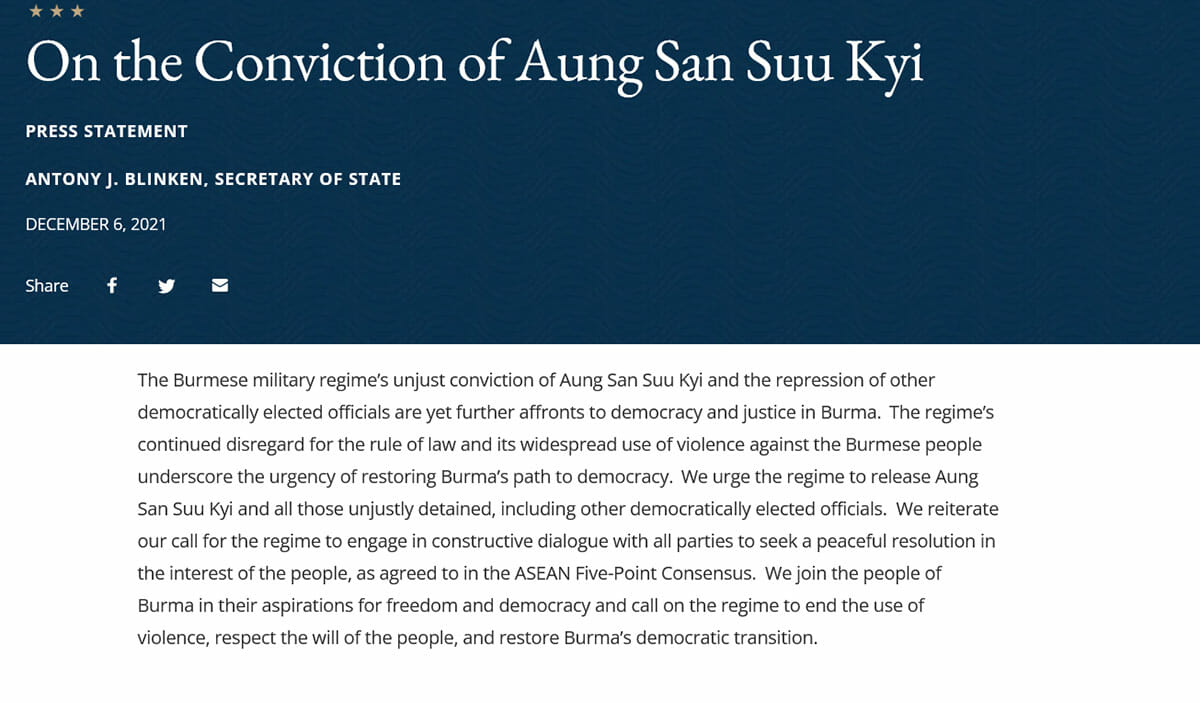 The day before the initial sentencing of Suu Kyi Monday (6 December, 2021), the junta troops rammed – at high speed – a military vehicle into a group of peaceful protesters in a suburb in the former capital Yangon. The incident left half-dozen young protesters dead while having injured a dozen others.  Al Jazeera English was the only major network that did a news report, using the locals’ eye-witness accounts and a grainy, but authentic video recording of this act of terrorism.

Myanmar social media users are right to question why the West, with its signature “global war on terrorism” over the last quarter century since 9/11 did not apply the same elemental definition of terrorism – the use of purposive violence against civilians indiscriminately to achieve a politico-strategic end (s) – when it is routinely carried out by Myanmar’s murderous regime.

The US Government, and Western media, typically characterise organized acts of indiscriminate violence against unarmed civilians, in the West or elsewhere, “terrorist”, especially when perpetrators are found to have any association with Islam.

That’s why, Myanmar activists and public in social media have been extremely dismayed by the fact that the 6 December-dated US State Department statement of condemnation regarding the 5 December violence against peaceful civilian protesters characterized as “security forces” the perpetrators of terrorist acts – ramming a military vehicle into a group of protesters from the back – on the streets of Yangon on Sunday. This legitimizing reference – “security forces” – of what the overwhelming majority of Myanmar people refer to as #terroristjunta is re-used and further amplified by globally influential western media outlets such as CNN.

Ramming cars, with the unmistakable intent to cause bodily harm indiscriminately, into Christmas fairs, anti-racism rallies (Charlottesville, Virginia, USA), a Sari shop (Sydney, Australia), or simply pedestrians (London) is a copycat tactic adopted by terrorists of differing stripes and colours. Burning people alive, decapitating surrendered or captured enemies or slashing with knives the faces of those suspected of defiance against the established order or norms is universally considered a thing of the dark past – harking back to the Spanish Inquisition. And yet in today’s Myanmar under the country’s military, these heinous acts – both medieval and terroristic – are adopted by the country’s national military, with blanket impunity. 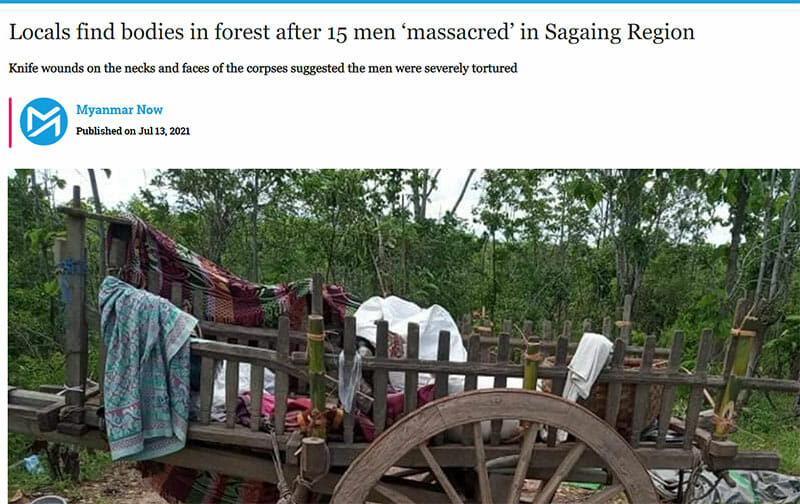 It is exceedingly difficult to see as legitimate behaviour of a national military such acts as burning down substantial sections of villages and towns, including places of worships, where communities refuse to accept the military’s General Administration; launching air strikes against minority villages using the Russian-made advanced gun-ship helicopters and super-sonic MiG.29 and SU-30 fighter jets; or firing artillery against civilian quarters which the coup regime suspect are the hiding places of the anti-coup civilian resistance groups.

No sooner had General Min Aung Hlaing feigned his magnanimity towards the deposed National League for Democracy leader Aung San Suu Kyi – by halving her initial 4-years imprisonment – than his troops – about 100 of them – stormed a small town in the Dry Zone heartland of dominant ethnic group Bama or Myanmar, rounded up a group of 11 unarmed civilians in a nearby village called Daung Taw (or forest of the peacocks). The youngest was 14. 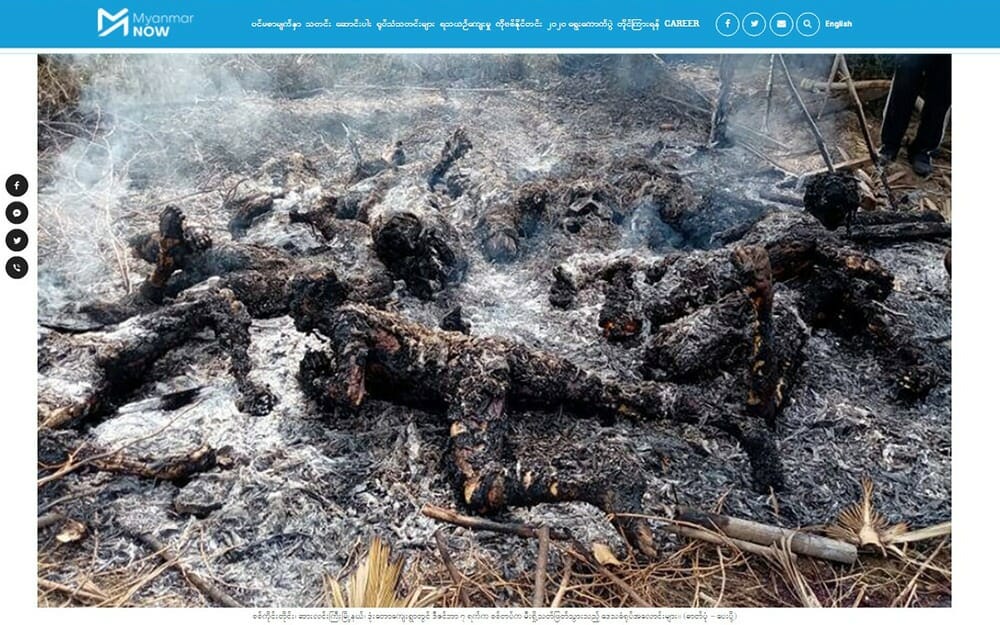 The fact of the matter is Myanmar military has been perpetrating barbaric acts of terrorism against agrarian or rural communities suspected of the now defunct Burmese Communist Party (BCP) which collapsed in 1989, in the regions of national minorities (such as Karen, Shan, Mon, Kachin, etc.) that have sought political autonomy through armed rebellions since the early 1950’s and 1960’s, and generations of urban-based anti-dictatorship dissidents since early 1960’s.

These crimes against humanity including torture – and more recently the military-organized terrorist attacks on entire towns and villages – are not perpetrated by a few “bad apples” in the national armed forces, nor are they the unfortunate result of the organizational dysfunction wherein the top commanders have no control over how the troops on the ground behave. 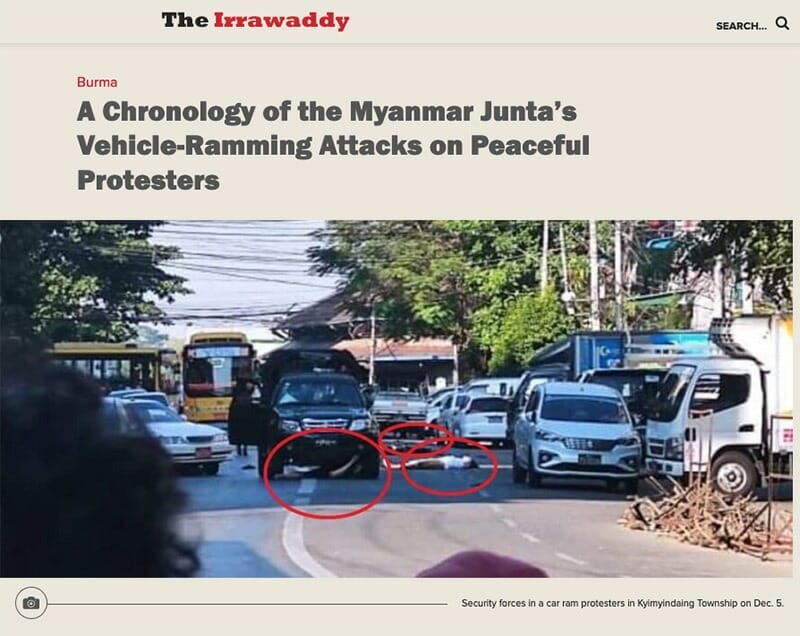 After nearly 2-years of investigation and documentation regarding Myanmar military’s atrocity crimes against Rohingyas in Western Myanmar state of Rakhine, the United Nations International Independent Fact-finding Mission Report released at the UN Human Rights Council on 18 September 2018 established that Myanmar military is a highly functional organization where the chain of command remains very effective. UN findings corroborated Rohingya activists’ earlier reports that claimed that Myanmar military troops mass-raped – by command – hundreds of Rohingya women and girls. In other words, atrocities are systematically perpetrated by the troops on the ground because they are ordered to do so – with the sole purpose of terrorising the population into a survival run, (as in the case of the genocidal purges of Rohingyas since 1978), or simply political subjugation of the general non-Rohingya public. 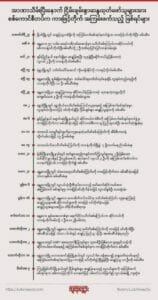 In 10 months since the coup, there have been 20 documented cases of Myanmar regime troops weaponising vehicles to attack civilians.

In my study of the inner workings of the Burmese military over the last 30-years, I have discovered beyond the pale of doubt that the Burmese military leadership has absolutely no regards for international law, any inter-state or international treaty or any Geneva Conventions when they order troops to use forced labour, torch villages and homes – often with civilian residents inside –  to force-march villagers as human mine sweepers or mine-shields in the country’s active civil war zones along the border regions, to use numerous forms of torture.

Convinced of the double-protection by Russian and Chinese regimes at the Security Council which could, in theory, activate UN Charter’s Chapter 7 intervention on grounds of international peace and stability, the generals continue to dismiss categorically any push for compliance with any treaty or any conventions that Myanmar as a UN state may have signed and ascended.

Importantly, the legal reasoning has evolved and expanded around rogue states and criminal behaviour. A case in point is the International Criminal Court’s ruling around the crime of mass deportation of Rohingya, being that it is within its jurisdiction to investigate grave crimes in international law committed by a non-signatory country (Myanmar), if the crime is completed on the soil of an adjacent signatory state (Bangladesh). Myanmar coup regime was seen telling a Japanese TV reporter that, “no foreign government can tell us what law to observe. We have absolute sovereignty. We have our own laws. ICC has no business investigating our issues.” 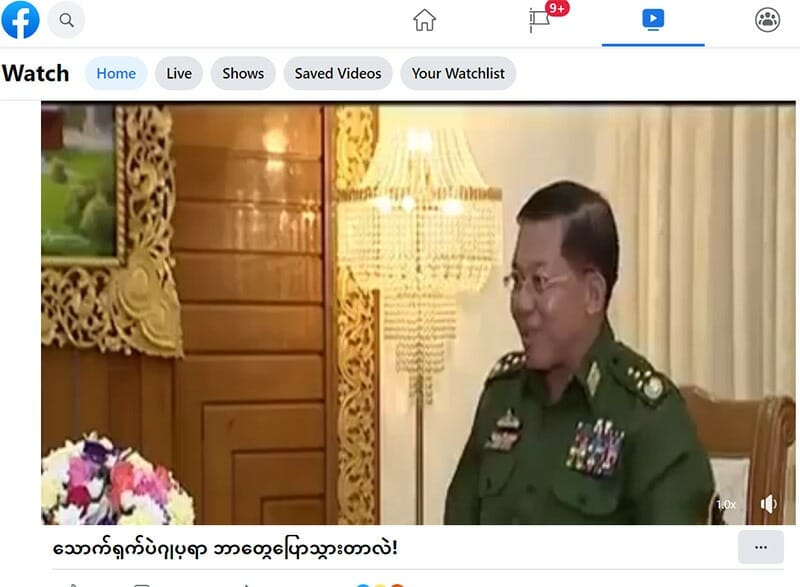 Myanmar coup regime was seen telling a Japanese TV reporter that, “no foreign government can tell us what law to observe.

In the 21st century, no one buys the absolutist notion of sovereignty. Burning civilians alive, using slave or forced labour, committing a textbook genocide, torturing thousands of dissidents in detention, or subjecting female prisoners to rape are no long acts acceptable to the nations that are united against the Evil of medieval-style Torture and modern-methodologies of Terrorism.

The Burmese public have already given up on any prospects of a meaningful Security Council action such as the activation of the Responsibility to Protect or R2P principle or the unilateral humanitarian intervention by the United States and our former “mother country” of the United Kingdom.

But they expect the European Union, Canada, Australia, Japan and other advanced nations involved in the US-led “global war on terror” to apply the same standards in terms of how an armed organization uses violence against unarmed civilian populations.

The least these governments and inter-state organizations and bloc can do is to call a spade a spade. Myanmar’s national armed forces has since the February coup, engaged in textbook terrorism against the country’s population, both majority and minority communities.    These national governments and world bodies should respect the Burmese public’s popular view of the military under Min Aung Hlaing a terrorist-mafia.

As a former military cadet, and a professional scholar of the military, among other things, I have pointed out the terroristic and mafia-like nature of Myanmar’s Tatmadaw as early as the early weeks of the coup. 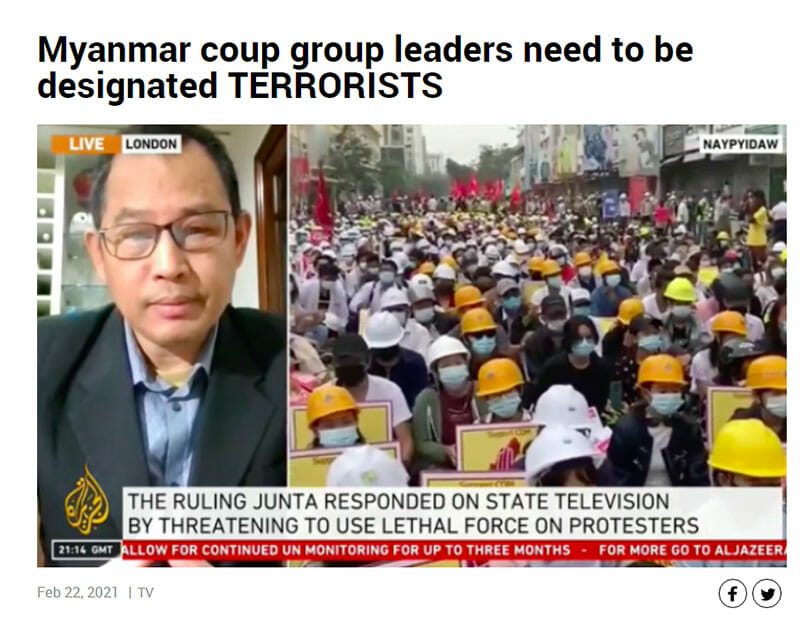 The continued dithering of member states of the United Nations in the face of a national military behaving like any other terrorist network – against its own citizens – has only emboldened the terrorist leaders in soldier uniform in Myanmar. Inaction against a known terrorist organization is tantamount to tacit acceptance of its behaviour.

It is well past time to end business-as-usual with Myanmar coup regime.  Designate Myanmar’s Tatmadaw a terrorist organization.