Assange Ruling a Dangerous Precedent for Journalists and British Justice

10 Dec 2021 – English High Court decision paving the way for extradition will make it even harder for journalists to hold the US to account. Today, the English High Court paved the way for WikiLeaks founder Julian Assange to be extradited to the United States and tried over the publication of hundreds of thousands of documents, some of which contained evidence of US and British war crimes in Iraq and Afghanistan.

The decision reversed a ruling in January by a lower court that had blocked the extradition, but only on humanitarian grounds: that Assange would be put at severe risk of suicide by the oppressive conditions of his detention in the US.

The 50-year old Australian faces a sentence of up to 175 years in prison if found guilty.

Amnesty International described the ruling as a “travesty of justice”, while Rebecca Vincent of Reporters Without Borders tweeted that it was an “appalling” decision that “marks a bleak moment for journalists and journalism around the world”.

Assange’s lawyers said they will appeal the ruling at the supreme court. But the fight to free Assange – even if ultimately successful – is certain to drag on for many more years.

The WikiLeaks founder has already spent more than a decade in various forms of incarceration: house arrest, political asylum and, since early 2019, solitary confinement in Belmarsh high-security prison in London.

The toll this has taken is immense, according to Nils Melzer, a law professor and the United Nations’ expert on torture. He has repeatedly warned that Assange is suffering the effects of “prolonged exposure to psychological torture”.

Family and friends warn that he is regularly confused about basic facts. At one hearing, he visibly struggled even to recall his name and age. 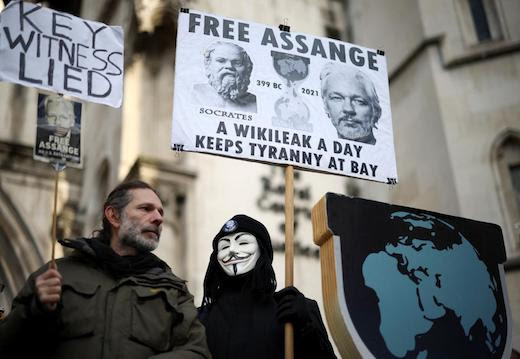 The reasons for Assange’s detention have shifted a number of times over the years: from an initial investigation of alleged sex crimes in Sweden, to a bail violation in the UK, and more recently espionage.

But the presence of the US national security state has never been far away. Assange’s supporters say Washington has been quietly influencing events, only showing its hand directly when it launched the extradition claim in 2019.

It was clear from the outset that the arguments made by the US could have huge implications for the future of journalism and its ability to hold powerful states to account. And yet the hearings have been given only cursory coverage, especially by the British media.

The case for extradition rests on a US claim that Assange carried out espionage in publishing hundreds of thousands of leaked materials in 2010 and 2011 with high-profile partners such as the New York Times, Washington Post, Guardian, El Pais and Der Spiegel. Called the Iraq and Afghan war logs, the documents show that the US army committed war crimes in those countries, killed non-combatants and carried out torture.

The United States clearly wanted to make sure there would be no recurrence of such a leak.

The problem was, if Assange could be jailed for doing journalism, why not also the editors of the papers he published with? Locking up the senior staff of the New York Times, Guardian and Der Spiegel was never going to be a good look.

This very difficulty stayed the hand of officials in Barack Obama’s administration. They felt cornered by the First Amendment.

But under Donald Trump the reticence quickly lifted. His justice department officials argued that Assange was a hacker, not a journalist.

With this as their premise, they felt free to redefine the new, digitally based national security journalism Assange and WikiLeaks pioneered as “espionage”.

To do so, they turned to the 1917 Espionage Act, a draconian piece of First World War legislation that gave the government powers to jail critics.

It was a move with serious implications. Trump’s justice officials were effectively claiming a new kind of universal jurisdiction: the right to put Assange on trial, even though he was not a US citizen and was not accused of carrying out any of the acts in question on US soil.

The English courts have now attracted rancor by seemingly giving their assent to political persecution. Critics fear the precedent means any journalist in the UK could now be dragged to the US for prosecution should they cause Washington sufficient embarrassment.

Assange and his supporters say the legal arguments of the extradition process were never more than a facade. They say there were plenty of clues that the US was seeking vengeance against Assange, not justice.

A decade ago, long before the US was openly battling to get hold of Assange, he was facing another extradition battle – this time with a Swedish prosecutor – as part of an investigation into allegations of sexual assault. It was around that time that Assange fled to Ecuador’s embassy in London seeking political asylum.

The disappearance of email chains between Britain’s Crown Prosecution Service (CPS) and Sweden from that time have raised suspicions that all was not as it seemed.

A few survive, and suggest that extra pressure was being applied.

A CPS lawyer wrote to a Swedish counterpart in 2011: “Please do not think this case is being dealt with as just another extradition.” The following year, as Sweden appeared to be preparing to drop the investigation against Assange, the same UK lawyer replied: “Don’t you dare get cold feet!!!”

Moves were afoot against Assange in the US too. In 2011, a grand jury was convened in the Eastern District of Virginia behind closed doors to draft an indictment. The location was no accident. That district of Virginia is where most of the US intelligence agencies are headquartered.

But the gloves really came off after Trump entered the White House. The CIA stepped into the fray, with its then director Mike Pompeo characterising WikiLeaks as “a non-state hostile intelligence service”.

In fact, in 2017 the CIA launched a “secret war” against Assange, according to an investigation by Yahoo News published in September. The agency variously plotted to poison Assange and kidnap him while he was holed up in the Ecuadorean embassy. According to the report, the CIA proposed to seize the Australian and smuggle him to the US in an echo of the “extraordinary rendition” programmes the agency used in the “war on terror”.

The kidnap operation reportedly included plans for a potential gun battle on the streets of London.

Separately, it was reported that the CIA had also bugged the embassy while Assange was there through a Spanish firm hired by Ecuador to provide security. This was apparently done without Ecuador’s knowledge.

Such an operation violated Ecuador’s territorial sovereignty. But worse, by listening in to Assange’s privileged conversations with his lawyers, as he prepared for the highly politicised extradition battle he knew was coming, the CIA polluted the legality of that very process.

In fact, a strong argument can be made that the UK courts should have thrown out the extradition case on those grounds alone.

And yet despite all this, the English High Court ruled on Friday that it was satisfied with “assurances” that Assange’s wellbeing would be protected were he extradited to the US.

British judges may be persuaded by those assurances. Many others, including Assange, will not be.

is an award-winning British journalist based in Nazareth, Israel, since 2001. He is the author of: Blood and Religion: The Unmasking of the Jewish State (2006); Israel and the Clash of Civilisations: Iraq, Iran and the Plan to Remake the Middle East (2008); and Disappearing Palestine: Israel’s Experiments in Human Despair (2008). In 2011 he was awarded the Martha Gellhorn Special Prize for Journalism. The same year, Project Censored voted one of Jonathan’s reports, “Israel brings Gaza entry restrictions to West Bank”, the ninth most important story censored in 2009-10.