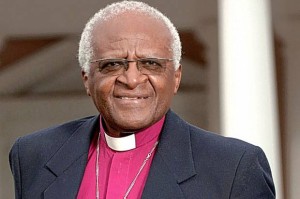 28 Dec 2021 – You are unlikely to learn about it in the media tributes to Archbishop Rev. Desmond Tutu who died on 26 Dec at 90 (1931-2021). But Tutu, like the Rev. Martin Luther King, Jr., was morally and spiritually a true world citizen — better yet, a World Patriot.  Tutu was among a large list of VIP’s who supported the drafting of a new world constitution – what is now known as the Earth Constitution.

Archbishop Tutu must have known that the United Nations could not fulfill its promise for world peace or human rights due to its defective Charter, and hence became a supporter for the drafting of the Constitution for the Federation of Earth (now known simply as the Earth Constitution).

Approached by the indefatigable and brilliant Philip Isely of the World Constitution & Parliament Association, Archbishop of Cape Town Desmond M.B. Tutu on October 11, 1989 signed on as an Honorary Sponsor to support the World Constituent Assembly convened to finalize the drafting of the Constitution for the Federation of Earth (aka Earth Constitution), and also to support subsequent Sessions of its Provisional World Parliament.

Rev. Tutu, a Nobel Prize winner, was joined as Honorary Sponsors of the Earth Constitution by nine other Nobel Prize winners in a WCPA document I have in my possession dated 12th December 1990.  Other notables offering their support for the creation of the Earth Constitution included Ramsey Clark, a famous human rights lawyer;  Ed Asner, well known Hollywood actor;  Dr. Max Habicht, advisor to the League of Nations;  Dr. Benjamin Ferencz, a Nuremberg  war crimes prosecutor;  and Dennis Brutus, poet in exile from South Africa.

There is a long list of Honorary Sponsors from all over the world, VIP’s such as the former Chairman of the Norwegian Nobel Committee, Egil Aarvik; a former leader of the U.K. Labor party, Tony Benn;  former Speaker of India’s Lok Sahba, Bal Ram Jakhar;  Israel’s famous novelist, Amoz Oz;  and former publisher/editor of the Scientific American, Gerard Piel.

The Provisional World Parliament just completed its 15th Session which was held in New Delhi, India in early December, 2021.  Due to the Covid-19 pandemic it was forced to meet virtually but with over 100 participants from around the world.

There is a growing movement to expand the Provisional World Parliament with the assumption that the United Nations may be unable, or unwilling, to significantly change, and hence will continue to fail to end war, eliminate nuclear weapons, restore the environment, or adequately protect human rights — Tutu spoke out not only about South African apartheid, but also Israeli’s apartheid and oppression of the Palestinians.

Democratic World Federalists are popularizing THE SAN FRANCISCO PROMISE which calls for the UN General Assembly to launch a review of the outdated UN Charter as legally required and promised under Article 109-3.  Such a review could open the door for the Earth Constitution — our world’s best, perhaps only, hope to save the world.

Roger Kotila, Ph.D. is a peace activist and a psychologist (ret.) with many years of clinical experience with the California Dept. of Corrections doing psychiatric diagnosis and treatment with inmates. President of Democratic World Federalists he is co-editor of DWF NEWS, and editor of Earth Federation News & Views. He supports a “new UN” under the Earth Constitution. www.earthfederation.info Email: earthstarradio@aol.com

Anticopyright: Editorials and articles originated on TMS may be freely reprinted, disseminated, translated and used as background material, provided an acknowledgement and link to the source, TMS: Learning Something New about [Nobel Peace Laureate] Desmond Tutu, is included. Thank you.