Ukraine-Donbas-Russian Frontier: Is a Non-governmental Interposition Peace Team a Possibility?

20 Jan 2022 – Despite USA-Russian Federation discussions in Geneva and a full Organization for Security and Cooperation in Europe (OSCE) meeting, there seems to be no advance toward a reduction of an estimated 100,000 Russian troops on the Ukrainian frontier.  There are discussions at the U.N. Security Council in New York on what could be a U.S.- led response if there were a Russian intervention into Ukraine.  While such a Russian intervention seems unlikely, the possibility of such an intervention is being seriously discussed in NATO government circles.  Thus it is opportune for non-governmental organizations also to discuss possible measures to prevent conflict and reduce tensions. 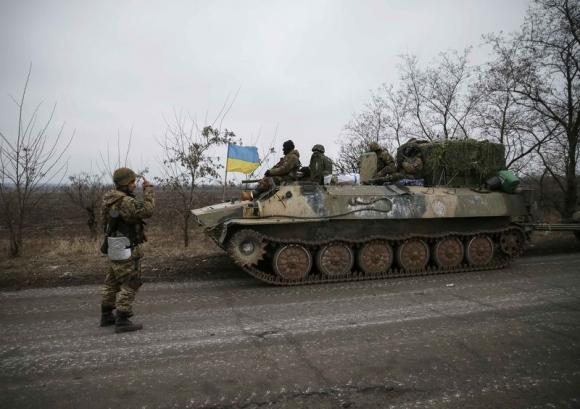 A convoy of Ukrainian armed forces including armoured personnel carriers, military vehicles and cannons prepare to move as they pull back from the Debaltseve region, in Paraskoviyvka, eastern Ukraine, February 26, 2015. Credit: Reuters/Gleb Garanich

One possibility, inspired by the efforts of the Shanti Sena (Peace Army) developed by followers of Mahatma Gandhi in India is to place some non-governmental teams on the frontier in order to provide an opportunity for all parties to “cool off” and negotiate.  One such effort in which I was directly involved as the representative to the United Nations in Geneva of the Peace Brigades International (PBI)  was the effort of a team of the newly created PBI in 1981 on the Nicaragua-Honduras frontier.

At the time, it was thought that U.S. troops stationed in Honduras might cross the frontier to attack the Sandinista-leftist government in Nicaragua or actively help the anti-Sandinista “Contras” to do so.  A Peace Brigades International-related group from California – the Jalapa Brigade – already created – was able to move to the frontier on short notice.  At the time that the Jalapa Brigade was put into place, the Ambassador of Nicaragua to the United Nations in Geneva was a former student of mine, and his brother, also a former student of mine, was the legal advisor to the President of Nicaragua.  Through the Ambassador, I was able to inform the Central American Missions to the U.N. as to the aims and role of the Peace Brigades.

In the end, the U.S. military did not cross the frontier.  Perhaps they never intended to do so.  It may also have been that the interposition of U.S. civilians with a good number of organizational contacts helped to weigh in the U.S. military decision-making process.

There have been other such interposition efforts.  One was the Gulf Peace Team created at the time of the 1990 Iraqi annexation of Kuwait.  The aim of the 73 member Peace Team in their statement of purpose was to be an “international multi-cultural team working for peace and opposing any form of armed aggression by setting up one or more international peace camps between the opposing armed forces.  Our object will be to withstand non-violently any armed aggression by any party to the present Gulf dispute.”  However, on 27 January 1991 the peace camp was closed by the Iraqi because the Iraqi authorities had “decided that the continued presence of the camp was a security risk”.

This interpositionary approach by non-governmental organizations is logistically and politically very difficult to accomplish.  There are economic and logistic resources required and, more importantly, the need to raise enough volunteers who are mature, culturally-sensitive, and analytically-minded to achieve a critical mass that would make a difference in the decision-making of the military present. There is also the need to keep unity of purpose within the teams if they have not worked together before.

The 100,000 Russian troops are at the frontier.  Can peace team interposition be created quickly?

Anticopyright: Editorials and articles originated on TMS may be freely reprinted, disseminated, translated and used as background material, provided an acknowledgement and link to the source, TMS: Ukraine-Donbas-Russian Frontier: Is a Non-governmental Interposition Peace Team a Possibility?, is included. Thank you.

One Response to “Ukraine-Donbas-Russian Frontier: Is a Non-governmental Interposition Peace Team a Possibility?”