The Cattle of Goa

After the government of Goa was forcibly driven out by the independent India in 1961, the original Portuguese speaking people cannot be seen today after more than half a century of that event.

In its place one can see visitors from many regions of India who come to the beautiful beaches of Goa located on the western part of the Indian coast. The roads to these beeches are comfortable for driving — perhaps too comfortable for the two wheeled bikes which are available for hire at moderate prices.

There are also visitors from all over the world, especially from Russia, whose presence is testified by some Russian language instructions on or near the beaches.

One can  also see some animals in various parts of Goa — cattle, pigs, poultry etc The cattle are mainly black skinned (bhains in Hindi language); one can hardly see some white coloured cattle known as   gay (in Hindi language). The reason I am using the Hindi names for the black, white skinned cattle is simple — I could not find the local language equivalents for bhains or gaay. A person from Assam in north eastern part of India gave the words in Assamese language: chaino (gaay) and  chaillon (bhains) in his language.

Incidentally, the white skinned gaay  is a symbol of religious purity and kindness in India especially in Northern parts. There are many cow shelters for the thousands of these white skinned animals that provide them with adequate food, water and dignity.

As I have indicated above, most of the cattle I saw in Goa were bhains— black skinned. I saw many of them near my temporary home in Goa. They sat quietly in their sheltered places looking peacefully, sometimes curiously at the goings on outside their shelters. I was amazed to see the peaceful expressions on their faces. One factor would be the fact that the cattle were aware of — they would not be butchered for meat as happens in several other countries. 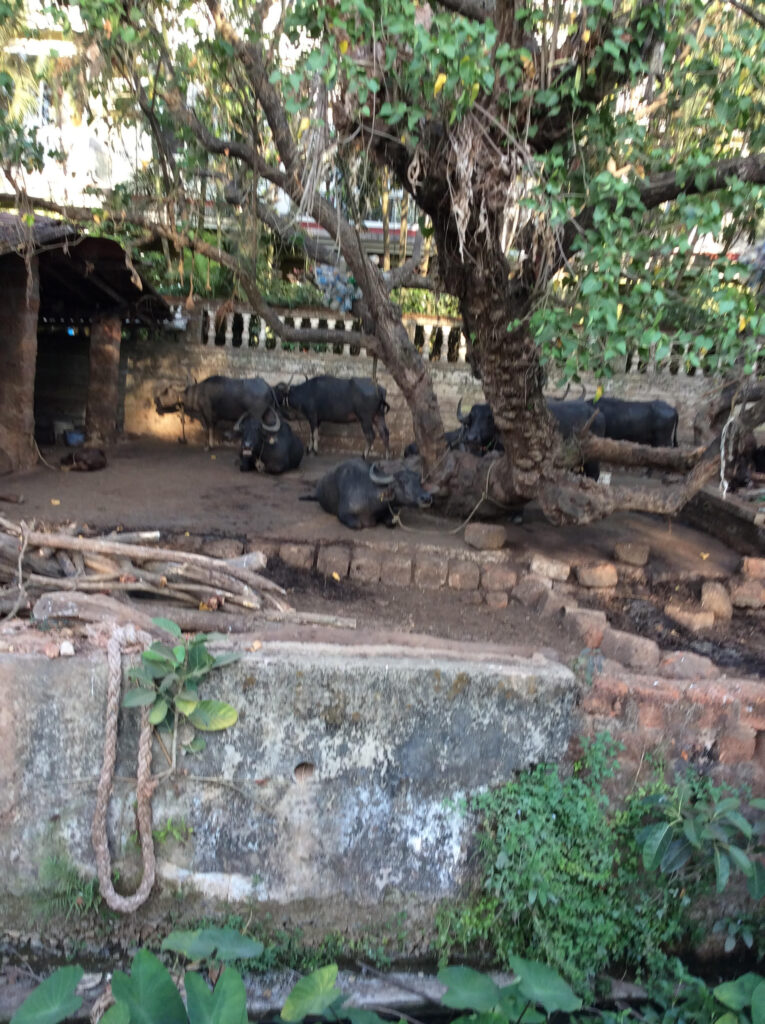 Another factor could be the fact that after the Portuguese people have left the country, the region has become peaceful without much conflict or violence except when state elections are to be held after every five years in Goa and elsewhere. One can hardly see any newspapers that highlight violence to make them more marketable. This peaceful attitude percolates down to the cattle chewing their cud, busy looking after their cubs and gazing with interest at the world outside.

So my friends next time you visit this beautiful region on the western coast of India, enjoy the beaches but also look for the peace-loving, gentle cattle.

Anticopyright: Editorials and articles originated on TMS may be freely reprinted, disseminated, translated and used as background material, provided an acknowledgement and link to the source, TMS: The Cattle of Goa, is included. Thank you.