The News Is Not That Israel Has Apartheid, but That Amnesty Dares Say So

3 Feb 2022 – Does the state of Israel now endorse cancel culture? AP (1/31/22) disclosed that its government called on Amnesty International not to release a report (2/1/22) that defines that nation’s legal structure as a form of apartheid. Israeli Foreign Minister Yair Lapid said the report endorses “lies shared by terrorist organizations.”

CNN (2/1/22) covered the Amnesty report, leading with accusations of antisemitism, the sort of cheap slap that offers little substance but a lot of vitriol. Politico (2/1/22) led also with the report’s condemnation by Israeli officials and pro-Israel groups, not the findings of the report itself. (This isn’t surprising, as FAIR—11/5/21—reported how Politico’s German owner mandates its outlets maintain a pro-Israel line.) 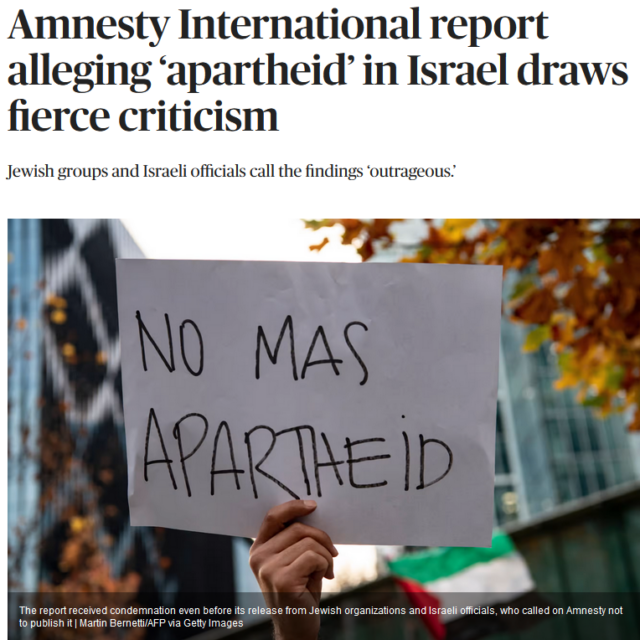 Politico also uncritically quoted Lapid calling the human rights group biased because “Amnesty does not call Syria an ‘apartheid state’”—as if “apartheid” were a generic term for “bad government,” rather than a specific form of racialized oppression. Amnesty’s web section on Syria states that all belligerents in the Syrian conflict, including government forces, have “continued to commit with impunity serious violations of international humanitarian law, including war crimes, and gross human rights abuses.” 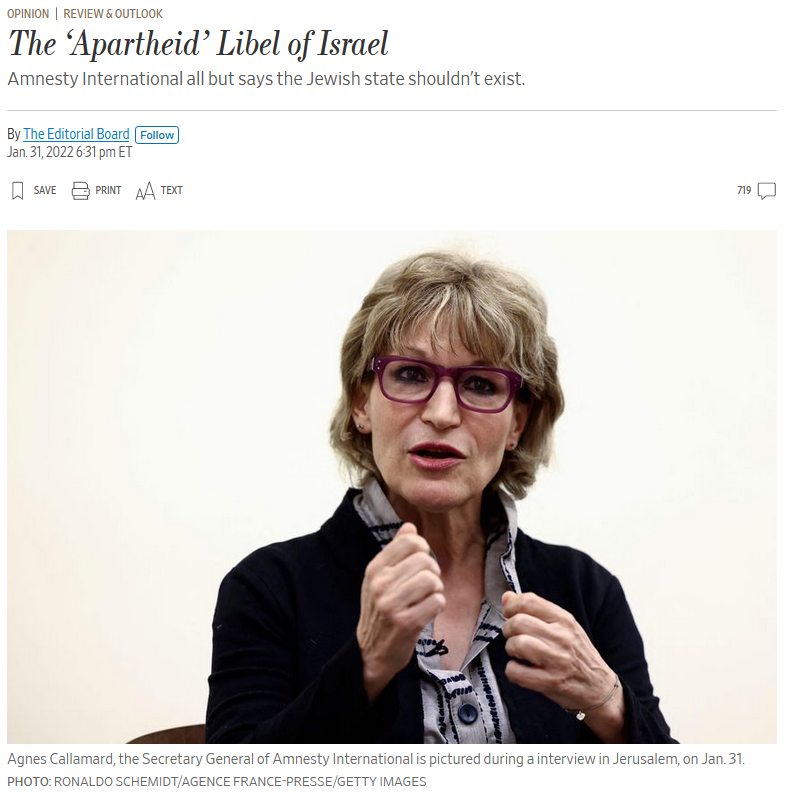 The Wall Street Journal‘s charge (1/31/22) that Amnesty’s report threatens “the very existence of Israel” echoes its earlier defense (1/13/64) of apartheid in South Africa, where “a one-man one-vote would open up the prospect of a black majority expropriating the property and destroying the livelihood of the white minority.”

The Wall Street Journal (1/31/22) condemned Amnesty’s report, saying it ought to receive “the world’s opprobrium and sanction” for its “denunciation of the very existence of Israel as a refuge for the Jewish people.” The Journal placed the blame for Israel’s discriminatory laws on Palestinians, because Jewish settlers “in historic Palestine had to fight to survive against Arab militias and national armies that wanted to push them into the sea.”

The paper peppered its editorial with hoary reminders that “Israel is a democracy” because Arabs who live inside Israel’s Green Line can vote and run for office. Meanwhile, the disenfranchised Palestinians who live under military occupation in the West Bank and Gaza—who are the majority of Arabs in Israel/Palestine—have only themselves to blame, because they “could have their own state with comparable rights if they had accepted the concessions that Israel offered.”

Almost 60 years ago, the Journal editorial board (9/25/63) made a similar argument against calls to boycott apartheid South Africa; the conservative daily argued that targeting white-run South Africa was hypocritical, because activists were not also targeting Arab Algeria with “equal disdain.” Historian William Henry Chamberlin wrote in the Journal (1/13/64) that condemnation of South African apartheid at the United Nations was “highly selective” because of strife in other UN member states, and reminded readers that white Boers had been in the country for “more than three centuries.”

Two decades ago, the Journal (11/21/01) promoted Israeli academic Arnon Sofer’s belief that due to “high Arab birthrates,” there must be complete “separation” between Jews and Arabs, because “without separation, Israel’s Jewish majority, one of Zionism’s pillars, will be undermined.” Now the paper is shocked to see a word that means “systematic separation” being applied to the country.

The New York Post (1/31/22) employed the same type of deflection as the Journal, using the tragedy of the Holocaust to justify Israel’s founding. It complained that the report doesn’t mention “Jews getting the boot from Gamal Abdel Nasser’s Egypt,” adding that “Yasser Arafat does not appear.” (Arafat died 18 years ago, and Nasser in 1970.) 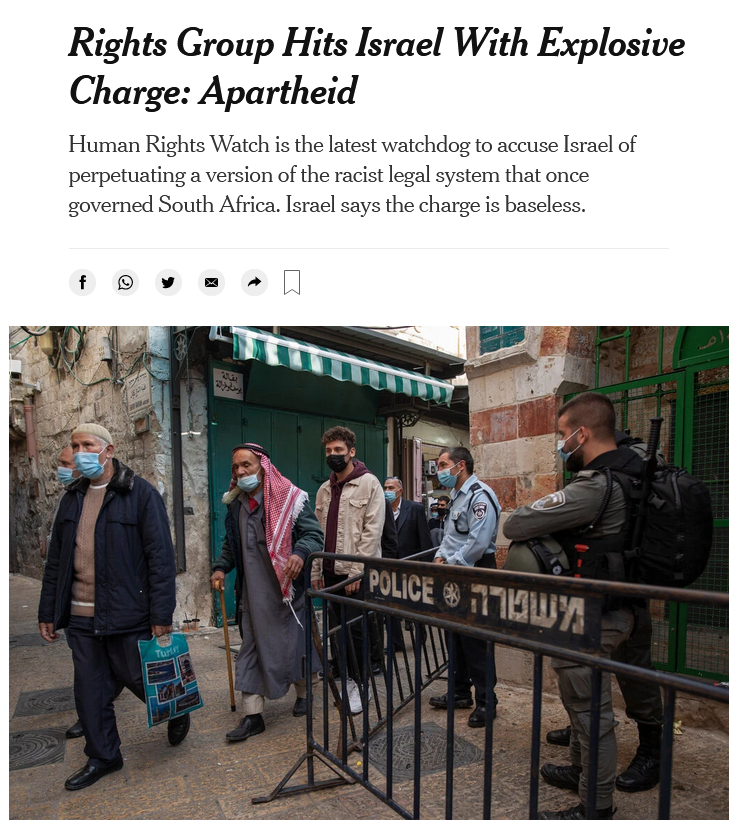 The New York Times has so far not covered the Amnesty report, but when it wrote (4/27/21) about Human Rights Watch’s similar conclusion, it featured the charge that finding apartheid in Israel “bordered on antisemitism.”

While a new stance for Amnesty, the report echoes the evaluation of other human rights experts. Human Rights Watch (NPR, 4/27/21) and the Israeli rights group B’Tselem (1/12/21) have both accused Israel of maintaining an apartheid system, and the late Bishop Desmond Tutu frequently compared Israel’s occupation to the apartheid system in South Africa he fought to eliminate (FAIR.org, 1/6/22).

The New York Times, as of this writing, has not covered the Amnesty report, although it did cover the Human Rights Watch report last year (4/27/21), leading with how the apartheid charge was “explosive,” and how at least one HRW representative had said in 2001 that it was wrong to equate Zionism with racism.

The Times, however, has also offered the same kind of deflections against the “apartheid” label we are seeing today; its review (1/7/07) of former President Jimmy Carter’s Palestine: Peace Not Apartheid called it “a strange little book” with “misrepresentations” of Arafat and late Syrian President Hafez al-Assad. Falling short of calling Carter an antisemite, the Times dismissed Carter for his “awfully narrow perspective,” “Rip van Winkle feel” and “tone deafness about Israel and Jews.”

Amnesty (2/1/22) states that “massive seizures of Palestinian land and property, unlawful killings, forcible transfer, drastic movement restrictions and the denial of nationality and citizenship to Palestinians” add up to what is called “apartheid under international law.” All of this comes down to a fundamental truth that while Israel enjoys more plurality and democratic institutions than some of its neighbors, a defining feature of the government is that an individual’s legal and political rights are tied to their national and religious identity, something that should be anathema in a liberal democracy.

The hostile media responses to Amnesty’s report barely bother to refute the findings. Criticism of Israel’s denial of Palestinians’ rights is deemed a threat to the country’s ability to be an explicitly Jewish state, the Journal said. This is an admission of Israel/Palestine’s existential crisis: A country can be an ethno-state or it can be a democracy, but it can’t be both. 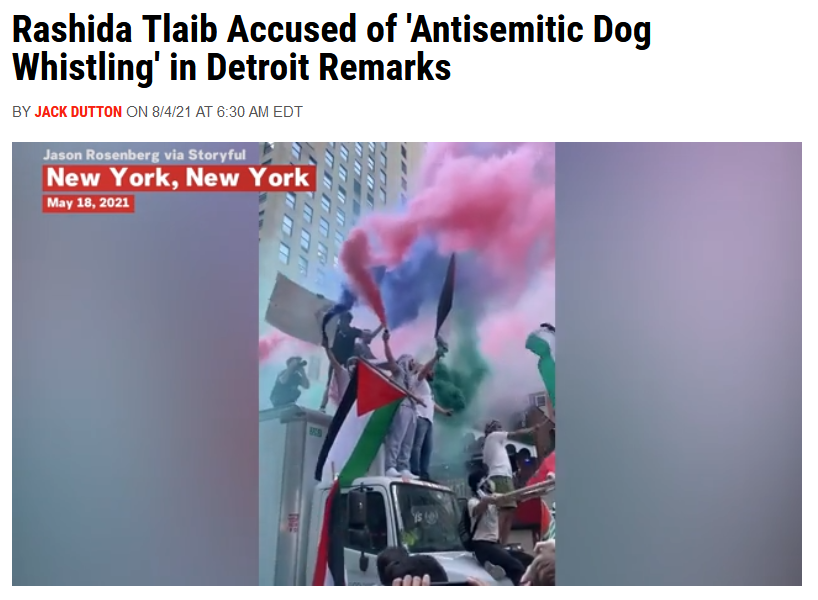 Newsweek (8/4/21) suggests that when Rashida Tlaib talks about “the structure we’ve been living under right now,” she means Jews rather than capitalism.

The charges of antisemitism being applied to criticism of Israel have become routine. Sonya Meyerson-Knox, senior communications manager at Jewish Voice for Peace, told FAIR (11/5/21) that “defending Israel’s regime of supremacy and violence does nothing to advance Jewish safety,” and that such rhetoric “helps fuel antisemitism, by reducing people with varying beliefs into a monolithic stereotype.”

The response that the report ignores Palestinian misdeeds overlooks that the group has, in fact, condemned Hamas’ human rights abuses (e.g., 3/27/15, 3/18/19). These pieces insist that when Israel is criticized, we change the subject to how bad Palestinian leaders are and how their predicament is ultimately their own doing. This is a continuation of a trend in media that offers not just pro-Israel coverage, but outright hostility toward other points of view.

For example, New York Times columnist Bret Stephens (9/23/21) not only condemned several congressmembers for decoupling US funding for an Israeli missile defense system from a “must-pass bill to keep the US government afloat,” but insisted that they should suffer “reputational cost for this supremely foul piece of political grandstanding.” Even treating support for the Israeli military as open to debate in a democratic forum is supposed to put you beyond the political pale.

Newsweek (8/4/21) amplified the accusation that Rep. Rashida Tlaib, a Palestinian American congressmember from Michigan, spoke in coded antisemitism when she linked Black suffering in Detroit to Gazans living under occupation. The accusation that she was insinuating that Jewish ringleaders were causing the world’s suffering was a stretch, but that was the price she paid for having the gall to link injustice in her district to injustice to her fellow Palestinians. 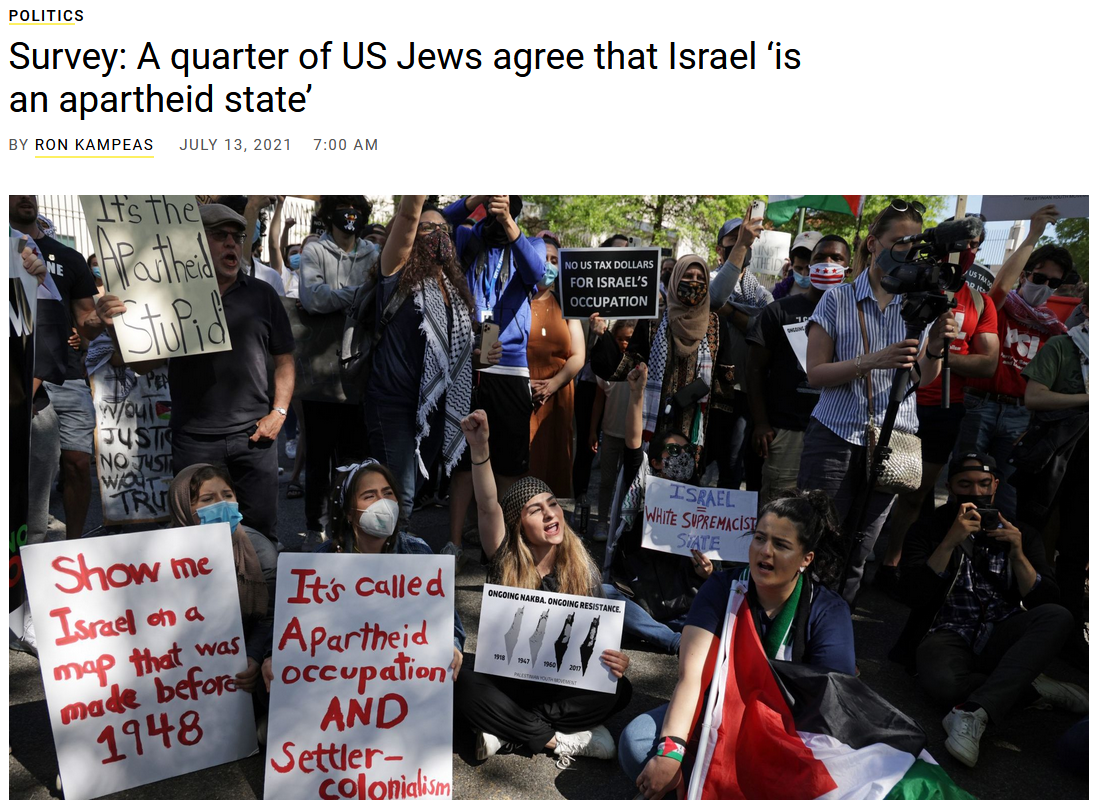 Jewish Telegraphic Agency (7/13/21): “Many American Jews agree with statements by some of Israel’s harshest critics on the left.”

With leading human rights groups using the “apartheid” label on Israel’s treatment of Palestinians, that terminology will be a bigger part of the Middle East discussion. That might be why the response has been so harsh. “The past decade has seen American public opinion in support of Palestinian human rights grow at an exponential rate across ages and religions,” said Meyerson-Knox.

Indeed, Gallup (3/19/21) reported that “the percentage wanting more pressure placed on the Palestinians has fallen to 44%, while the proportion wanting more pressure on Israel has increased from 27% to 34%.” Last summer, a poll (Jewish Telegraphic Agency, 7/13/21) of US “Jewish voters taken after the Israel/Gaza conflict” found that “a sizable minority believe some of the harshest criticisms of Israel”: “34% agreed that ‘Israel’s treatment of Palestinians is similar to racism in the United States,’” and “25% agreed that ‘Israel is an apartheid state.’”

Jewish Voices for Peace’s Meyerson-Knox added that, “The significance of Amnesty’s report in continuing to shape public opinion cannot be overstated,” because “the chorus of internationally respected voices calling for an end to Israeli apartheid is simply too loud to be ignored.”