Does Gabriel Boric Have the Answer?

Who is Gabriel Boric?  He is the recently elected 35-year-old President of Chile.

What is the question to which Gabriel Boric might have the answer?

It is:  “How can the tide be turned so that social democracy, which is now  at best beating an orderly retreat, makes a comeback, and becomes again, as it was in the heyday of the Swedish Model, a credible vision of humanity´s future?”

What is Gabriel Boric’s answer?  I translate selected typical phrases from a flyer widely distributed by his campaign:

“I am Gabriel Boric, born and raised in Punta Arenas, a member of parliament, and a candidate for President.  I want to invite you [using the familiar te, not the formal usted] to participate, because the country we dream [soñamos] we will build all together [con todas y todos, all women and all men]

Súmate for a feminist Chile

Súmate for a Chile that takes care of us and values diversity.”

Social Democracy Is Now Checkmated, Game Over, a Non-Starter

Non-starter?  Game Over?  This is strong language.  Nevertheless, I think I can make a case that it is not an exaggeration by calling just two witnesses, Joseph Schumpeter, and Jeffrey Winters.

But first a qualification: Under unusual conditions (such as those that prevailed in Europe during the trente glorieuses) social democracy is a viable option.  Contemporary examples are Norway and Bolivia.  Both are in the embarrassing position of enjoying  high and stable (Norway) or growing (Bolivia) levels of social justice made possible by capturing rents from fossil fuels, during a period of history when the natural sciences and Greta Thunberg are telling us (truthfully) that fossil fuels ought not be mined, sold, and burned.  Nonetheless, Norway and Bolivia are making social democracy work.

First Witness:  In 1919, at the age of 36, Joseph Schumpeter became Minister of Finance in the newly founded Republic of Austria. In 1918 he had published Die Krise des Steuerstaats (The Crisis of the Tax State).  He had argued, first, that prior to modern republics, rulers had many sources of income. Their greatest single source of income was rents from land ownership. Second, the modern republic was inseparable from a liberal legal framework, limited government, reliance on taxes for government income, and a market economy.

“What matters is that  the potential tax yield is limited not only by the supply of the taxable object, less the subsistence minimum of the taxable subject, but also by the nature of the driving forces of the economy.” (p. 115 of the English translation)

This somewhat opaque sentence from 1918 predicts the tax competition among nations of 2022.  Given the nature of the driving forces of the economy, persons and corporations whose permissive acts (investments) start economic activity are wined and dined and subsidized.  Low taxes, access to credit; infrastructure and security provided at public expense, and guarantees that profits made in a country can freely be moved out of it, are among the standard policy tools for getting investors “excited” about investing.  (Dani Rodrik, One Economics, Many Recipes)

Schumpeter´s tenure as Minister of Finance lasted less than eight months.  In his letter of resignation, he explained that he was being asked to perform an impossible task and to deceive the public.  A tax state (Steuerstaat) could not be a welfare state. My conclusion:  A model like the classical Swedish model of social democracy could govern a high wage and full employment island (Sweden) in a low wage and high unemployment ocean (the world) under unusual circumstances.  But when normality came home, illusions became homeless.

“And it is precisely in designing and implementing policies [of the governments hr] that meet the population´s investment and production needs [the population´s first need is good jobs] , by first satisfying the core objectives [i.e. high profits, low risk]  of those controlling capital that the structural dimension of investors´ political power finds expression.”  (Page 3)

It follows that governments do not govern.  Markets command governments more than governments command markets. Winters further elaborates: Governments, whatever their ideology may be, in practice devote themselves to attracting investment and to discouraging disinvestment.

Winters goes on to demonstrate the existence in our times of a further extension of a logic that has been implicit in capitalism from the beginning.

(I simplify, using the expression “the economy” as it is commonly used, while knowing that, as Hazel Henderson and others have shown, more than half the world´s work is done outside “the economy” that gets so much attention and whose malfunctioning does so much damage.)

Now, in 2022, a hegemonic rule of law cements in place a locational revolution that disempowers governments that were already disempowered at the beginning of modernity by establishing tax states, assigning the bulk of money creation to private bankers, and by conditioning the legitimacy of government on obedience to the terms of a fictitious social contract that gives investors  the power to decide whether the economy stops or goes.  Failure to solve the employment problem leads to failure to solving many other problems.

To expect to solve such problems by passing laws is a serious illusion, a non-starter.  Worldwide, humans are called to step back from dominant assumptions, to put the rules of the economic game between parentheses, to question them, to go back to Square One and to ask. What does it mean to be human?  What are we living for?

Does Gabriel Boric Have the Answer?

The answer to this question does not depend on Gabriel Boric.   It depends on whether his invitation to sumarte is accepted.  It depends on whether the private sector, the public sector, civil society, families, and individuals align for the common good.   Chile, like the rest of the world, is not going to become sustainable because the Government, or the Constitution, decrees the maxim:  act in such a way that if everyone acted as I act the biosphere would be sustainable.  It is not going to become feminist because the police arrest all men who sometimes act like irresponsible macho dudes and the judges’ sentence us to prison terms.

The idea of inviting todas y todos to participate voluntarily in building sustainability, respect for women, justice, caring, and dignity in diversity is not something Gabriel Boric thought of all by himself.  He speaks for a youth culture that has been gathering strength for many decades now in Chile and around the world.  He speaks for women and men of all ages, and in all income groups from the poorest to the richest, who refuse to believe that another world is impossible. 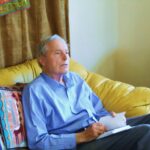 Prof. Howard Richards is a member of the TRANSCEND Network for Peace Development Environment. He is a philosopher of social science and Research Professor of Philosophy at Earlham College, Richmond, Indiana, USA. He was educated at Redlands High School in California, Yale, Stanford, University of California at Santa Barbara, University of Toronto, Harvard and Oxford. He currently teaches in the University of Cape Town`s EMBA programme. His books include: The Evaluation of Cultural Action; Letters from Quebec; Understanding the Global Economy; The Dilemmas of Social Democracies; Gandhi and the Future of Economics; Rethinking Thinking; Unbounded Organizing in Community; and The Nurturing of Time Future. His new book, written with the assistance of Gavin Andersson, Economic Theory and Community Development: Why Putting Community First Is Essential for Survival, is now available from the publisher, Dignity Press, and from Amazon and other major booksellers, as a print book and as an eBook. howardri@earlham.edu

Anticopyright: Editorials and articles originated on TMS may be freely reprinted, disseminated, translated and used as background material, provided an acknowledgement and link to the source, TMS: Does Gabriel Boric Have the Answer?, is included. Thank you.