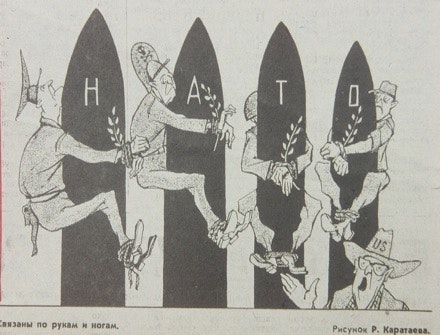 From a Soviet Newspaper, October 1984

Back Then in the USSR

25 Mar 2022 – In 1984 I went to the USSR with the Association of Humanistic Psychology as a citizen diplomat during the height of the Soviet-American nuclear arms race. That was the good old days when Reagan called the USSR “the Evil Empire.”

I put aside my shyness to become a speaker for Physicians for Social Responsibility on the psychology of the arms race. I did slide shows (on a clunky old carousel projector) on the image of the enemy.[1] Political cartoons illustrated concepts like archetypes of enemy images, the mirror image of the enemy, the function of enemy images, etc. (I will organize these slides for Substack)

I brought copies of my booklet on “Changing the Image of the Enemy”[2] to the USSR. Someone who saw my work gave me these 5 cartoons from an October 1984 Soviet newspaper. This is how the US government was perceived by the Soviets 38 years ago. They liked the American people then, and American jeans, differentiating us from our government.

The KGB got to see my booklet during my second experience with them, having been expelled in 1971 as a young, poorly prepared student trying to visit Refuseniks. But that is another story.

A few years later, I was denied a visa, recognized as a persona non grata, to return with my Peace Research Associates colleagues for a meeting with Gosteleradio, the Soviet State TV network, to plan a Philadelphia – Leningrad Sister Cities Project,“ spacebridge” between families, three generations, to humanize the enemy. We met with Gostelaradio in New York. US TV stations refused to meet with us. Underdogs tend to be more open.

Cold War rhetoric rhymes with today’s hot war rhetoric., with media consumed by moral outrage, hate and fear, bombarding us with enemy imaging.  Few reflected on how the Soviets, now Russians, perceive us. I called it “nuclear narcissism.”

Never fight evil as if it were something that arises totally outside of yourself. — St Augustine

Metacognition – Seeing How They See Us