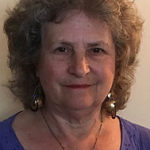 Can Dems Be Part of the Solution at AIPAC?
Diane Perlman | Medium – TRANSCEND Media Service, 24 Feb 2020

23 Feb 2020 – A coalition of progressive organizations is pressuring Democratic candidates to boycott the AIPAC-American Israel Public Affairs Committee Conference in Washington, March 1–3, 2020. Skipping AIPAC would be a huge mistake and a loss for the candidates, the party, our democracy, and AIPAC. 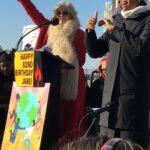 Is there a way to create a new reality that addresses the interests of major parties? The TRANSCEND Method is based on the central thesis that to prevent violence and develop the creative potential of a conflict, there has to be transformation. Normal conflicts are complex and involve many actors, goals and issues. 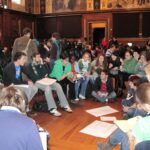 15 Dec 2019 – The 25th meeting of the Conference of Parties of the UN Framework Convention on Climate Change, COP 25, has just ended in Madrid. Ten years ago, I had the privilege of attending COP 15 in Copenhagen with Mediators Beyond Borders. 45,000 people registered. Delegates, negotiators, NGOs, press, and over 1000 youth participated in more than 2000 events over two weeks. Images below

After almost 50 years, the NPT boasts partial success with horizontal proliferation as we only have four new Nuclear Weapons States: India, Pakistan, Israel and North Korea–not parties to the NPT. However, all NWS are engaged in vertical proliferation with nuclear modernization programs triggering a new nuclear arms race without the benefit of arms control arrangements.

Mental health professionals are gravely concerned about the known effects of the cruel and inhumane policy of tearing children away from their parents who have made extraordinary sacrifices to protect them. We are horrified as we helplessly witness our government inflicting psychological damage upon vulnerable people. 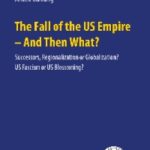 The State of the Empire in the Age of Trumpism
Diane Perlman, Ph.D. – TRANSCEND Media Service, 18 Dec 2017

“I hate the US Empire, but I love the US Republic.” For years I have been hearing this mantra from Johan Galtung my dear friend, mentor and colleague. As events unfold, it takes on new meaning.

Dominant thought forms shape thinking and feeling in ways that limit ideas about what is possible. We need words, frames, concepts and categories that allow us to imagine transformative solutions. The most experienced, mature, and wise people recommend beginning with a policy of “Freeze for freeze” whereby the US and South Korea stop joint military exercises in exchange of NK’s halting testing. This reduces tension, fear and humiliation, a face-saving way out and creates a field for dialogue and to apply the TRANSCEND method.

Surprisingly few people know about the historic event at the UN on 7 July 2017. A Treaty on the Prohibition of Nuclear Weapons was approved by 122 member states. On 20 September the treaty opened for signatures and so far 53 countries have signed and three have ratified it – the Holy See, Guyana and Thailand. The treaty becomes international law 90 days after 50 states ratify it. The hard work begins now, and the TRANSCEND community has a specific and necessary contribution to make.

I am post-partisan and outside the boxes. Your outside-the-box tendencies and pragmatic business skills can enable you to transcend incompatible contrived categories which impede deep understanding, enlightened policies and capacity for progress. As a political psychologist interested in reversing cycles of violence and retaliation, I can envision this possibility.

For 40 years, there is virtual, unquestioned acceptance of nuclear energy, with frequent and automatic repetition of the mantras –the “inalienable right” to “peaceful uses” of nuclear energy, the “the third pillar” throughout the speeches. The belief in nuclear power is so deeply and widely held that it may seem outrageous to even question it.