The hands of the Doomsday Clock are at two minutes to midnight for the first time since 1953. Trump has violated the Iran Nuclear Deal/Joint Comprehensive Plan of Action, the JCPOA, a multilateral diplomatic achievement. Trump and Russia blame each other as excuses to pull out of the landmark Intermediate-Range Nuclear Forces Treaty, INF, signed by Reagan and Gorbachev in 1987. The US and Russia plan to test new missiles that exceed the treaty limits and there are concerns about the 2021 renewal of the New Start Treaty. This is the tip of the iceberg, undoing decades of negotiated arms control agreements.

The NPT – Nonproliferation vs. Disarmament

The Nuclear Nonproliferation Treaty (NPT), considered the cornerstone of global nuclear stability, is in crisis. Next year is the 50th anniversary and major 2020 NPT Review Conference. The NPT entered into force in 1970 to prevent the uncontrolled spread of nuclear weapons beyond the five nuclear weapons states – US, UK, Russian, France and China.

“Each of the Parties to the Treaty undertakes to pursue negotiations in good faith on effective measures relating to cessation of the nuclear arms race at an early date and to nuclear disarmament, and on a Treaty on general and complete disarmament under strict and effective international control.”

I wonder whether people in 1970 imagined that in 50 years we might have a world free of nuclear weapons.

After almost 50 years, the NPT boasts partial success with horizontal proliferation as we only have four new Nuclear Weapons States: India, Pakistan, Israel and North Korea–not parties to the NPT. However, the NWS have not implemented their commitments to Article 6, the 1995 Resolution on the Middle East, the 13 practical steps for nuclear disarmament in 2000, to 22 disarmament actions in the 2010 action plan, and so on.

All NWS are engaged in vertical proliferation with nuclear modernization programs triggering a new nuclear arms race without the benefit of arms control arrangements. The NWS claim to be living up to their disarmament obligations by reducing their numbers from 65,000 at the height of the Cold War. Now the US and Russia possess 90% of the world’s 15,000 nukes. Modernization includes new lower yield weapons with new rationales for their use in security doctrines. 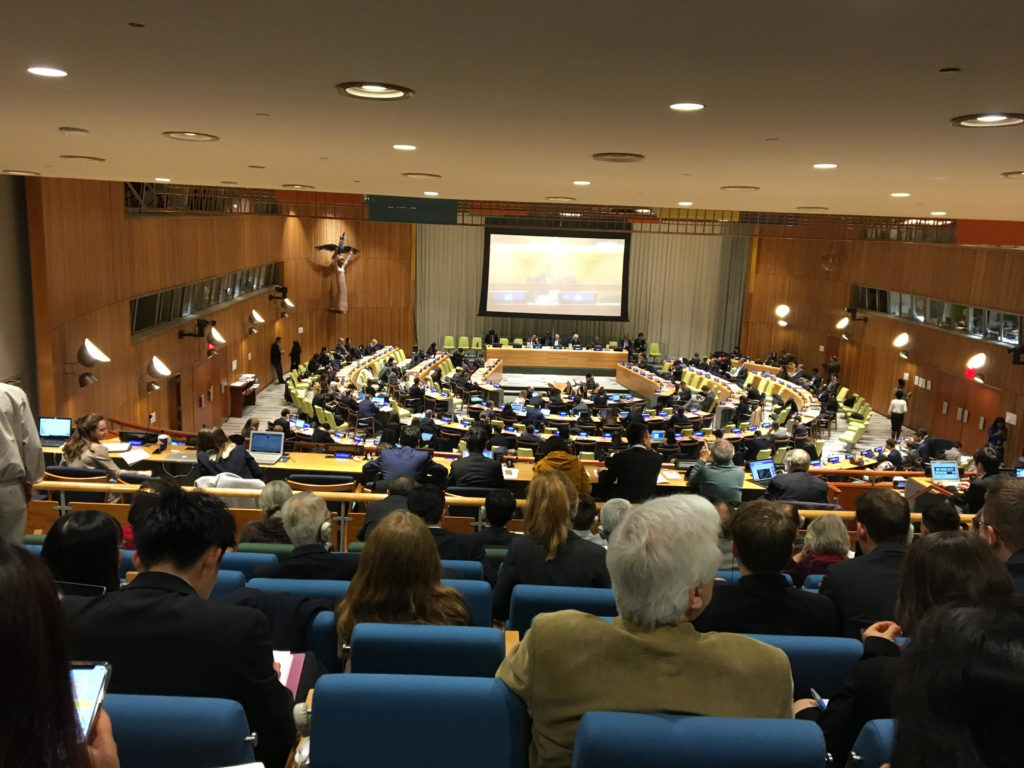 2019 NPT PrepCom meeting, May 1, 2019. Representatives from civil society observe from the balcony.

These issues were prominent at the recent UN 2019 Nuclear Nonproliferation Treaty (NPT) Preparatory Committee for the 2020 Review Conference 4/29 – 5/10. I was proud to represent TRANSCEND along with many other civil society organizations.  I also brought in Psychologists for Social Responsibility (PsySR) and Mediators Beyond Borders (MBBI), recognizing the need for the support of colleagues with expertise in analyzing and creatively addressing the underlying conflicts.

Since my first NPT conference in 2000 I have witnessed a major asymmetrical power conflict between the NWS and the NNWS with incompatible agendas – the NWS emphasize nonproliferation – we keep ours, you don’t get yours, and the need for deterrence deemed necessary to deal with changes in the security environment and the NNWS passionately fighting for disarmament with visions of Hiroshima and Nagasaki. (*) 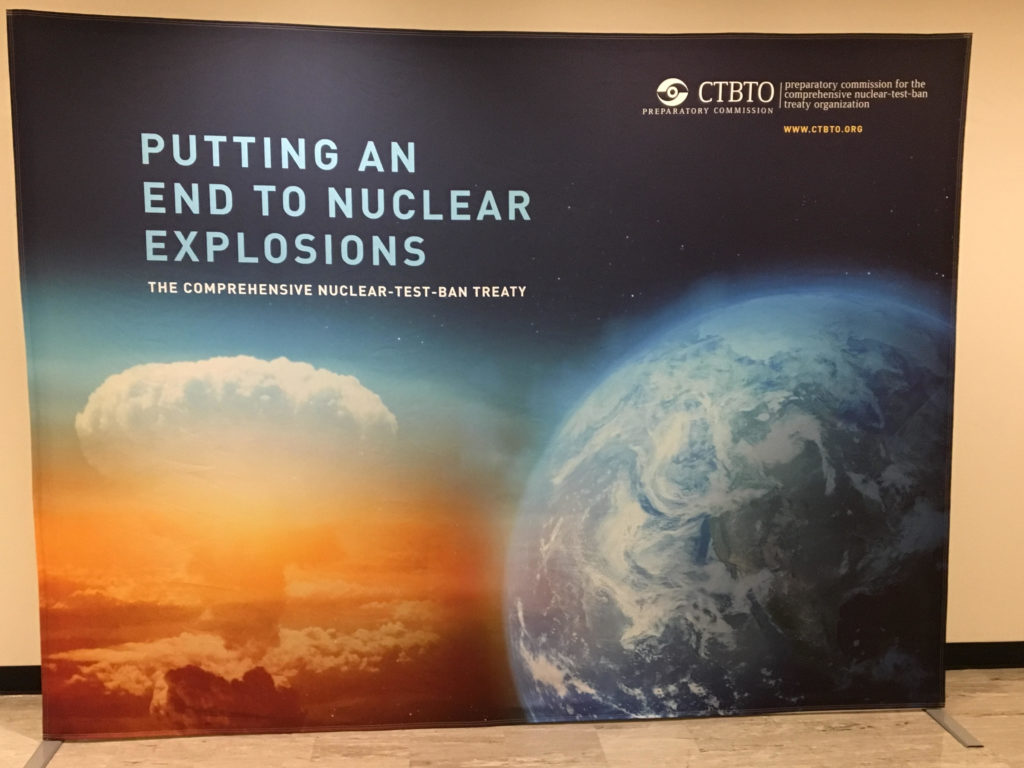 The Comprehensive Nuclear-Test-Ban Treaty (CTBT) that bans all nuclear explosions was adopted by the United Nations General Assembly on 10 September 1996, but has not entered into force as eight specific states have not ratified the treaty.

Over years, NNWS and members of civil society have become increasingly frustrated and demoralized, racking their brains for new strategies. They have continued to organize and build new initiatives. The Humanitarian Consequences Initiative (HCI) held three major conferences in 2013 and 2014. It made a huge impact and changed the conversation. It was boycotted by the NWS. 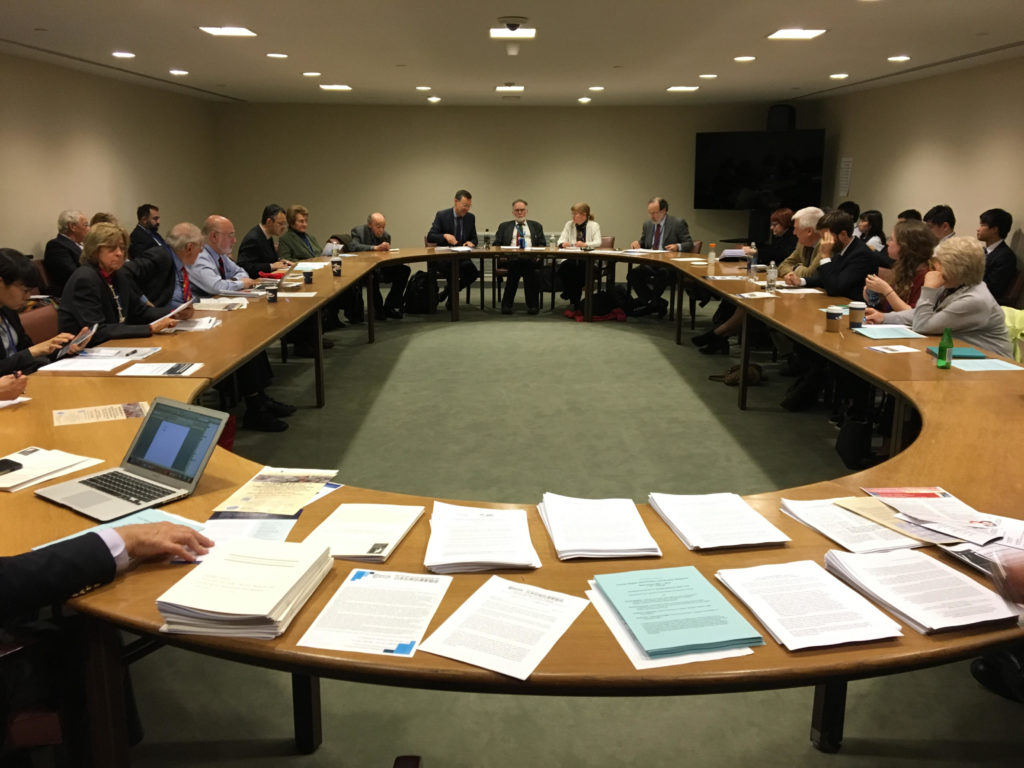 Conference Room C for civil society, for side events, briefings and meetings. 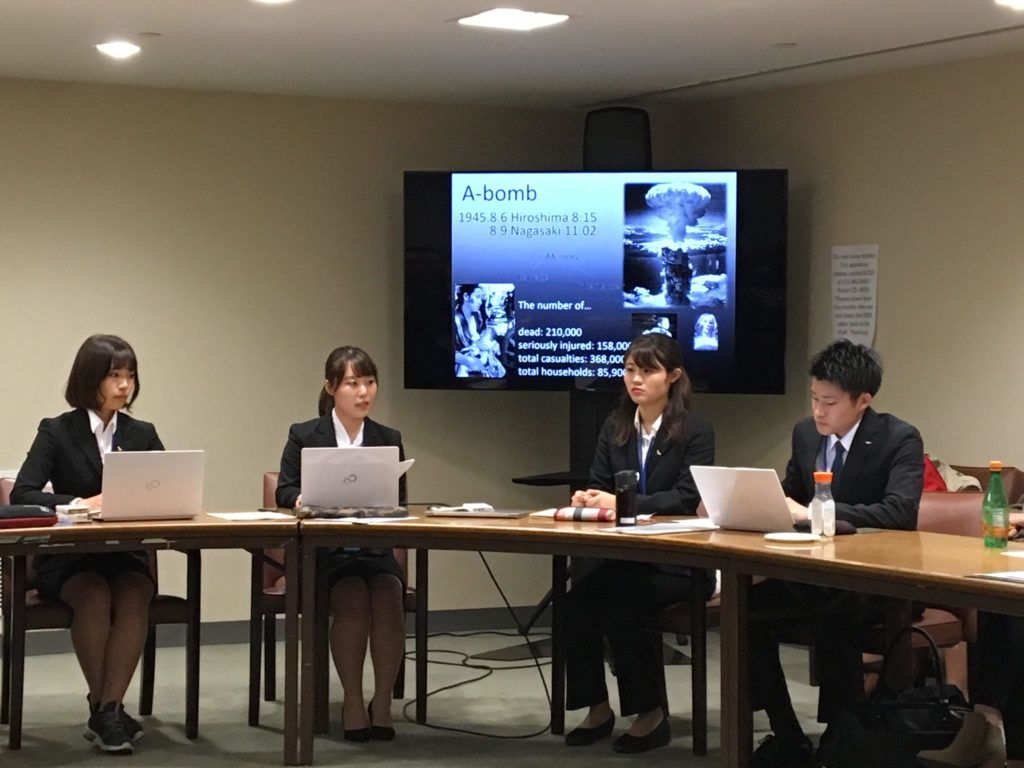 Side event with youth from Japan, including grandchild of Nagasaki Hibakusha Atomic Bomb.

This led to work with the UN General Assembly to hold negotiations on a Treaty on the Prohibition of Nuclear Weapons (TPNW) or the Ban Treaty. I had the honor of representing TRANSCEND at the TPNW. The Ban Treaty was adopted with 122 votes for which the 2017 Nobel Peace Prize was awarded to the International Campaign to Abolish Nuclear Weapons (ICAN).

The TPNW was a major accomplishment, setting a new global norm.  It was boycotted by NWS and allies, who are actively discouraging countries from ratifying it. At the recent NPT conference, delegates from the NNWS praised the TPNW Ban Treaty and encouraged states to ratify for 50 signatories required to enter into force. The NWS criticized the TPNW, claiming it is naïve and a threat to the NPT. 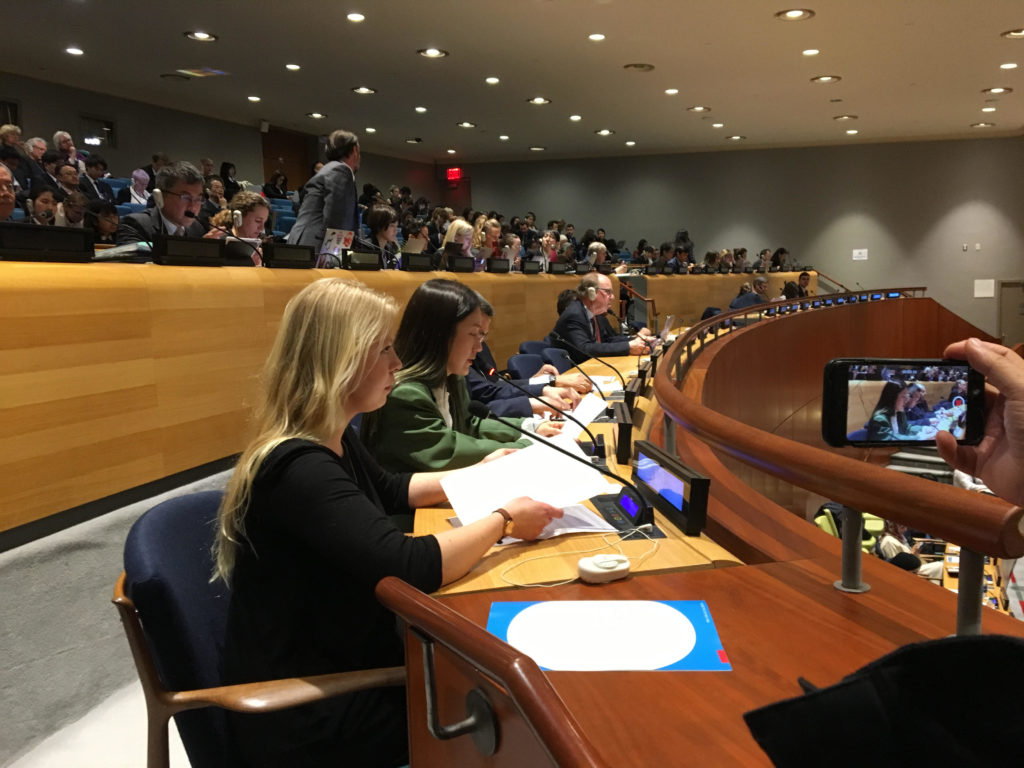 At every NPT, the NGO civl society represetnatives are given a few hours to present to the delegates. Compared to the formal language and rules of the NPT, the NGO’s are a breath of fresh air, adding Eros, life energy to the dry logos, and provide important information and experience from Hibakusha A Bomb survivors, to physicians, religious leaders, Mayors for Peace, international lawyers, humanitarian perspectives, and youth.

Conflict Transformation for the NPT?

What might our community have to contribute to transforming underlying conflicts that pose an existential threat to life on Earth?

I welcome comments. I am beginning to prepare for a November conference on a Nuclear Weapons free Zone in the Middle East and for the big 2020 NPT Review conference. I intend to build and organize a Coalition on Second Order Change, COSOC, to focus on addressing the underlying conflicts and causes using the TRANSCEND Method.

This has not yet been done, although Articles 33-38 of the UN Charter governing the peaceful settlement of disputes, states that the parties

“shall first seek a solution by negotiation, enquiry, mediation, conciliation, arbitration, judicial settlement, resort to regional agencies or arrangements, or other peaceful means of their own choice.”

Inspired by Mediators Beyond Borders’ pioneering work at the UN Climate Conferences, I began to raise the issue of the need to address the underlying conflicts at the NPTs. Initial receptivity to these ideas by high level delegates must be cultivated between now and next year. I invite members of the TRANSCEND community to join me at the 2020 NPT Review Conference and to explore ways we can help transform primary conflicts that threaten our fragile global nuclear order. There is a void that we can fill.

To achieve enduring security we need a Second Order Change. It is essential to understand and analyze what the underlying conflict is about, to identify all parties’ wants, needs, just grievances and legitimate goals. Conflict transformation techniques can reduce tensions, address basic human needs (including identity, dignity, self-determination, and sovereignty), and help bridge incompatible goals, using creativity and best practices; ideally, creating a new reality that includes and transcends the opposites. 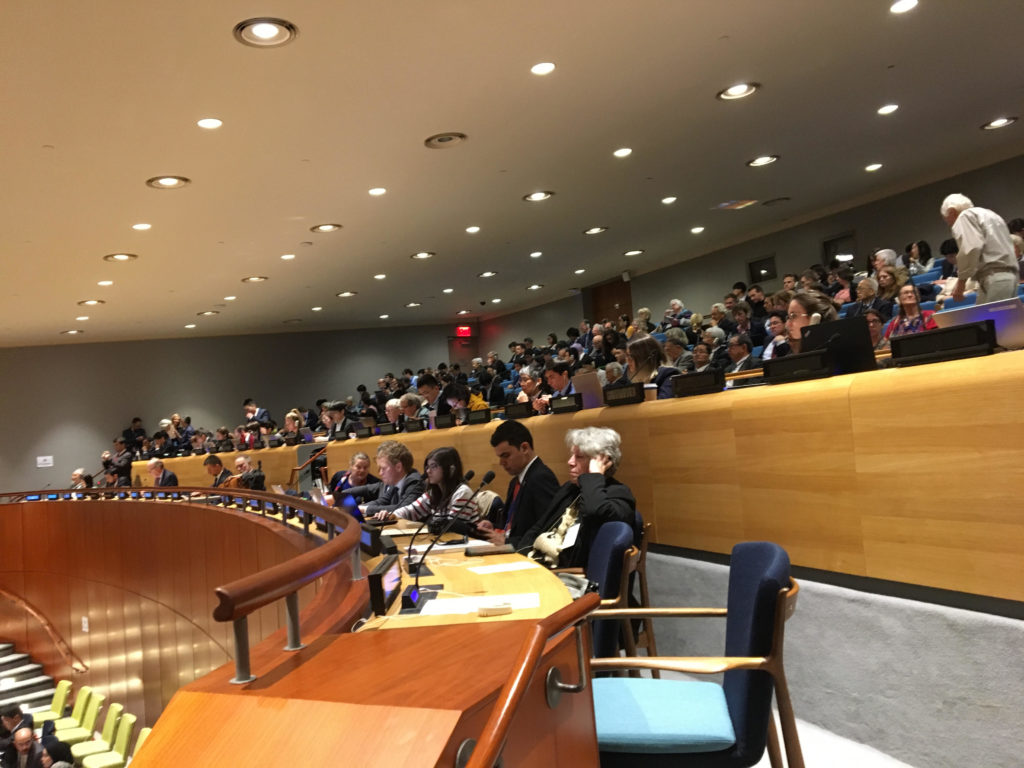 In the beginning the NNWS likely expected negotiations towards disarmaments as promised. After decades of failure of implementation of commitments such as 13 steps, building blocks, action plans, made in the NPT, those desiring to create a world without nuclear weapons tried different approaches. The Humanitarian Consequences Initiative followed by the Ban Treaty. These were now approaches attempting to overcome the lack of progress in the NPT. Both were hugely impactful with empathy for suffering and a strong moral comfort for the remaining aging Hibakusha bomb survivors. They were boycotted by the NWS and allies. Some countries that wish to ratify the Ban Treaty are being actively discouraged by the US.

The US delegation, insisting on the need for its own deterrence while denying that policy to others, has proposed a new initiative – CEND, Creating an Environment for Nuclear Disarmament.

While many NGOs consider CEND a distraction and an excuse to further delay commitments to disarmament, there is a chance it might provide an opening to introduce the idea of conflict transformation. Whether CEND can include TRANSCEND remains to be seen. I will make an effort with and/or without CEND. 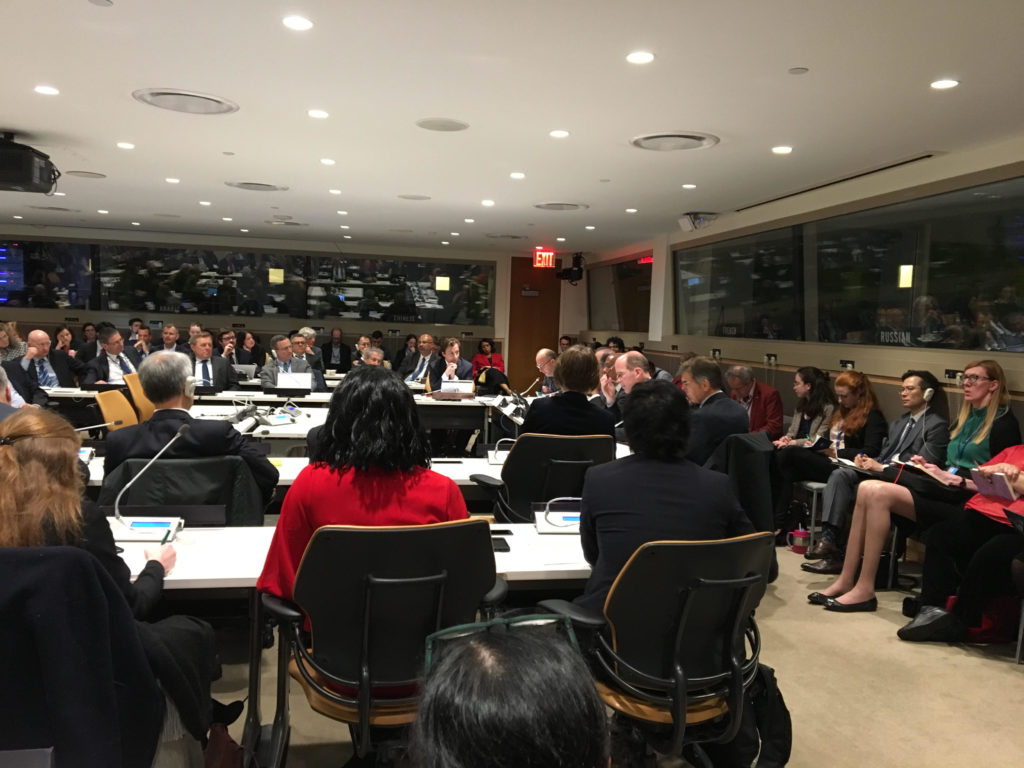 US Delegation Side Event CEND Creating an Environment for Nuclear Disarmament.

Here are some specific ways conflict transformation can be applied. There are primary conflicts and secondary conflicts. Intervening at higher levels, dealing with causes and relationships hold the most promise.

I welcome ideas, proposals, strategies and participation to increase TRANSCEND’s contribution at the UN.

“There’s been a quantum leap technologically in our age, but unless there’s another quantum leap in human relations, unless we learn to live in a new way towards one another, there will be a catastrophe.”
— Albert Einstein 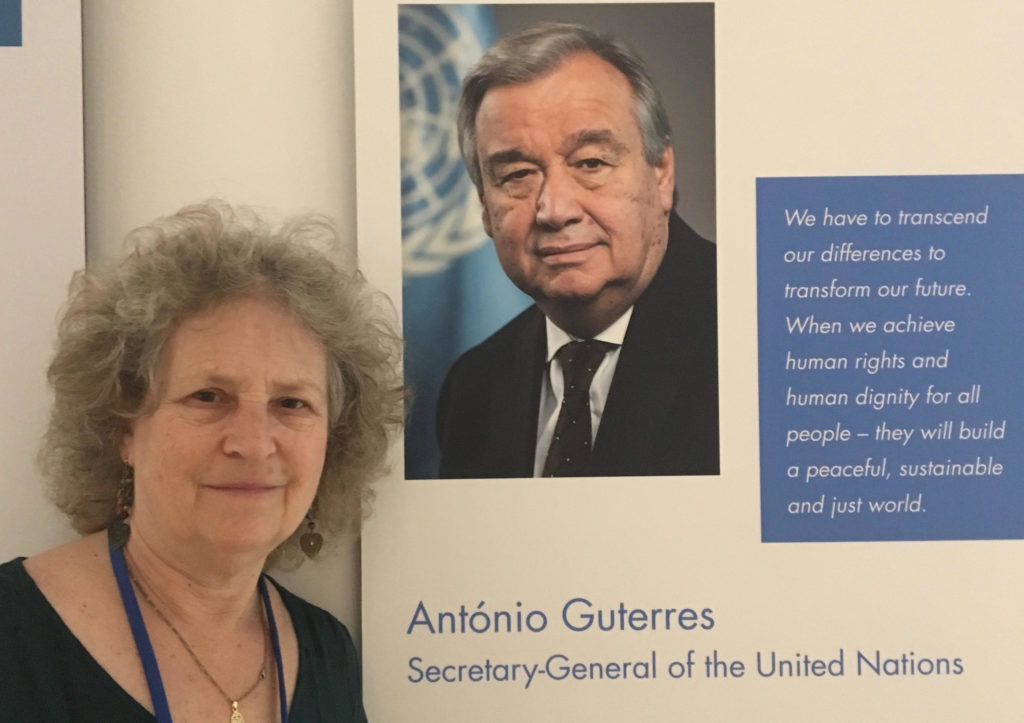 (*) The NPT is pervaded by an ongoing primary conflict between nonproliferation (status quo) and disarmament. Civil society NGOs and NNWS have been begging for disarmament, complaining that the NWS have not complied with Article 6 of the NPT, to negotiate in good faith towards disarmament.

The NWS along with allies under our “nuclear umbrella” focus on nonproliferation – making sure no one else gets nukes (except our allies), maintaining the status quo. The NWS say they are complying with Article 6 because we have drastically reduced our numbers from the peak of about 65,000 in 1986 to 15,000 now.

The NWS say they still need to keep nuclear weapons for deterrence, but NNWS to not accept their version of deterrence theory. Exasperation with the lack of progress on building blocks and action plans committed to during each 5 year NPT Review Conference led civil society and NNWS to try the Humanitarian Consequences Initiative – emphasizing how terrible the weapons are and all the terrible consequences. This led to the Ban Treaty, denigrated and opposed by the NWS and allies and pressures to various countries not to ratify it. The Ban treaty did win the Nobel Peace Prize, set a new norm, and is changing the conversation and increasing the tension between nuclear haves and have nots.

The US, in recent Nuclear Posture Reviews has claimed that the threat environment is different now so we need to keep our nukes. I believe this led he US to propose the CEND to show they are working on creating conditions for disarmament.

Diane Perlman, PhD   is a clinical and political psychologist, devoted to applying knowledge from psychology, conflict studies and social sciences to designing strategies and policies to reverse nuclear proliferation, to drastically reduce terrorism, reduce enmity, and to raise consciousness about nonviolent strategies for tension reduction and conflict transformation. She is a visiting scholar at the School for Conflict Analysis and Resolution at George Mason University, is active in Psychologists for Social Responsibility, the TRANSCEND Network for Peace Development Environment,  and on the Global Council of Abolition 2000. Some of her writings can be found on her websites, www.consciouspolitics.org  and  www.SanityandSurvival.com. Email: dianeperlman@gmail.com.

Anticopyright: Editorials and articles originated on TMS may be freely reprinted, disseminated, translated and used as background material, provided an acknowledgement and link to the source, TMS: The Nuclear Nonproliferation Treaty: Primary Conflicts and Second Order Change, is included. Thank you.