Surprisingly few people know about the historic event at the UN in New York on July 7, 2017. A Treaty on the Prohibition of Nuclear Weapons was approved by 122 member states. All nuclear weapons states, allies, and most NATO members boycotted the negotiations to draft the Ban Treaty. The Netherlands attended due to public pressure, but was the only party to vote against it. Singapore, abstained. 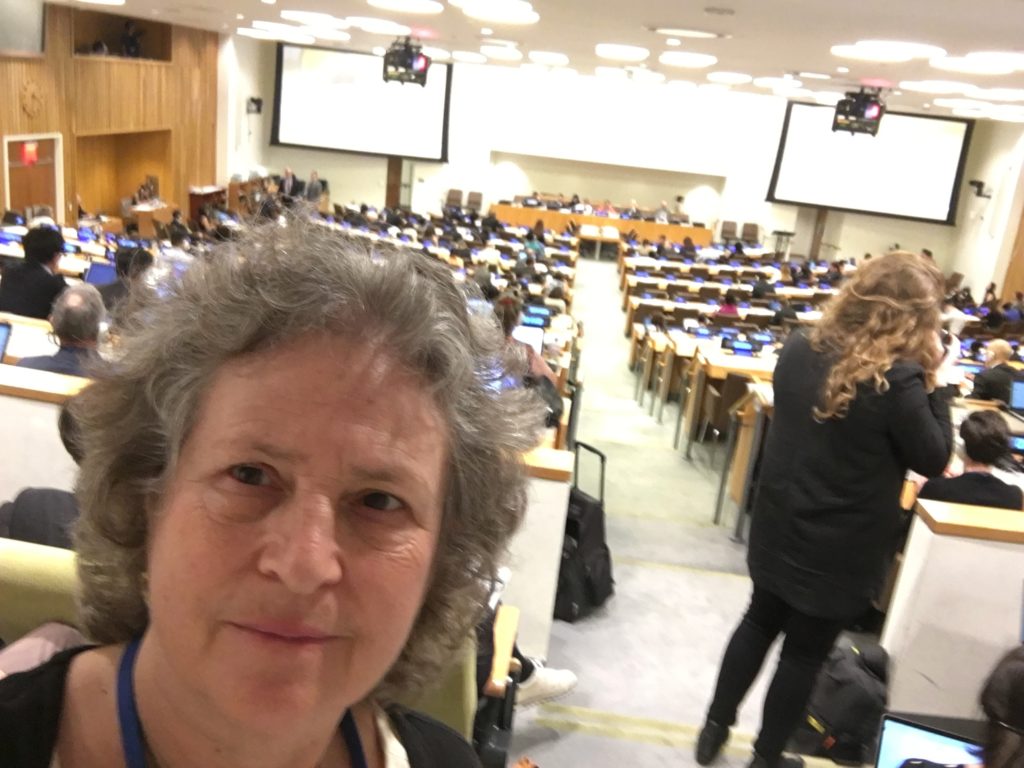 On September 20, 2017 the treaty opened for signatures at the General Assembly. So far, 53 countries have signed and three have ratified it – the Holy See, Guyana and Thailand. The treaty becomes international law 90 days after 50 states ratify it.

Having secured UN accreditation, I was honored to represent the TRANSCEND Network, along with many devoted Civil Society NGOs. I raised our perspective, presenting two side events. We can increase our presence to fill a void at future UN meetings.

Check out and endorse statement HERE. 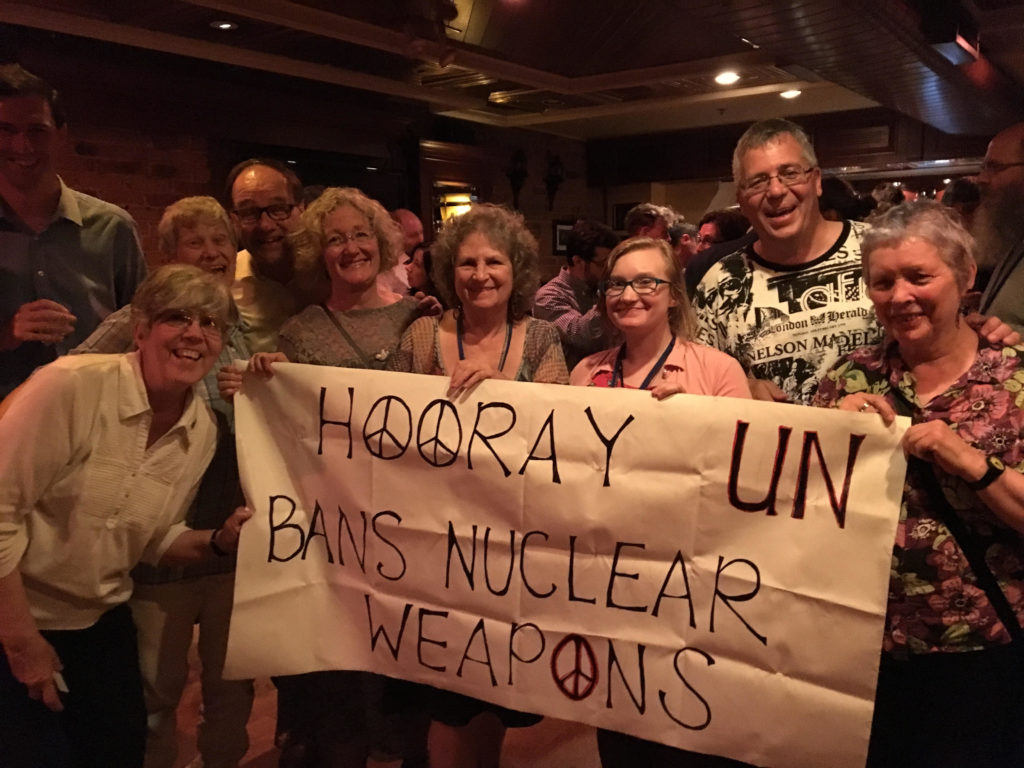 The treaty prohibits states parties from developing, testing, stockpiling, manufacturing, possessing, transferring, or threatening to use nuclear weapons. The full text of the Treaty IS HERE.

After three weeks of negotiations, the vote was followed by a joyous standing ovation, see HERE.

Delegates and civil society representatives expressed mutual gratitude and admiration for the skillful leadership of Elayne Whyte Gomez, Costa Rica’s ambassador to the UN who presided. Hiroshima survivor, Setsuko Thurlow, who waited seven decades for this treaty, movingly invoked the witness of victims of the1945 atomic bombings, HERE.

Opposition to the Ban Treaty

Immediately following the vote, the US, UK and France issued a Joint Statement refusing to accept it as international law; they complained that most “states relying on nuclear deterrence have also not taken part in the negotiations.” They were all invited, but chose to boycott. Furthermore, they said,

“This initiative clearly disregards the realities of the international security environment. Accession to the ban treaty is incompatible with the policy of nuclear deterrence, which has been essential to keeping the peace in Europe and North Asia for over 70 years. A purported ban on nuclear weapons that does not address the security concerns that continue to make nuclear deterrence necessary cannot result in the elimination of a single nuclear weapon and will not enhance any country’s security, nor international peace and security… This treaty offers no solution to the grave threat posed by North Korea’s nuclear program, nor does it address other security challenges that make nuclear deterrence necessary. A ban treaty also risks undermining the existing international security architecture which contributes to the maintenance of international peace and security.” 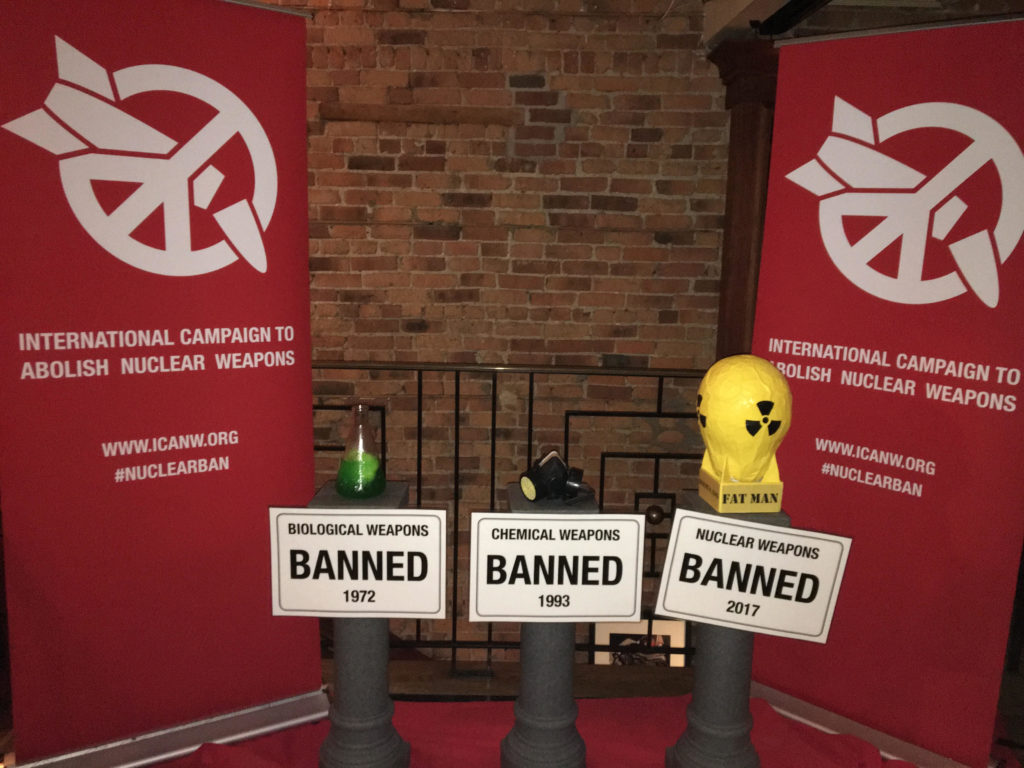 This statement, rich with possibilities for transcendence, reflects the decades-long conflict between advocates of disarmament and advocates of nonproliferation and deterrence. In addition to twisted logic, it contains some truths.

The simplistic belief in deterrence fails to consider conditions under which it might break down and flip into spiral dynamics of proliferation. Former Defense Secretary Robert MacNamara said we survived the Cold War by “dumb luck.” There have been many near misses and we are now at a new brink. Political psychologist Richard Ned Lebow noted that “… deterrence can provoke the very behavior it seeks to prevent.”

They say, “This treaty offers no solution to the grave threat posed by North Korea’s nuclear program.” Neither does their approach. They are correct in saying the Treaty does not “address other security challenges,” as it only eliminates the weapons, the symptoms – known as first order change.

The TRANSCEND approach can help. Neither deterrence nor disarmament analyze underlying conflicts, consider what the parties want, identify legitimate goals and create a new reality – known as second order change.

Let’s understand some background of this conflict at the heart of all other nuclear conflicts. 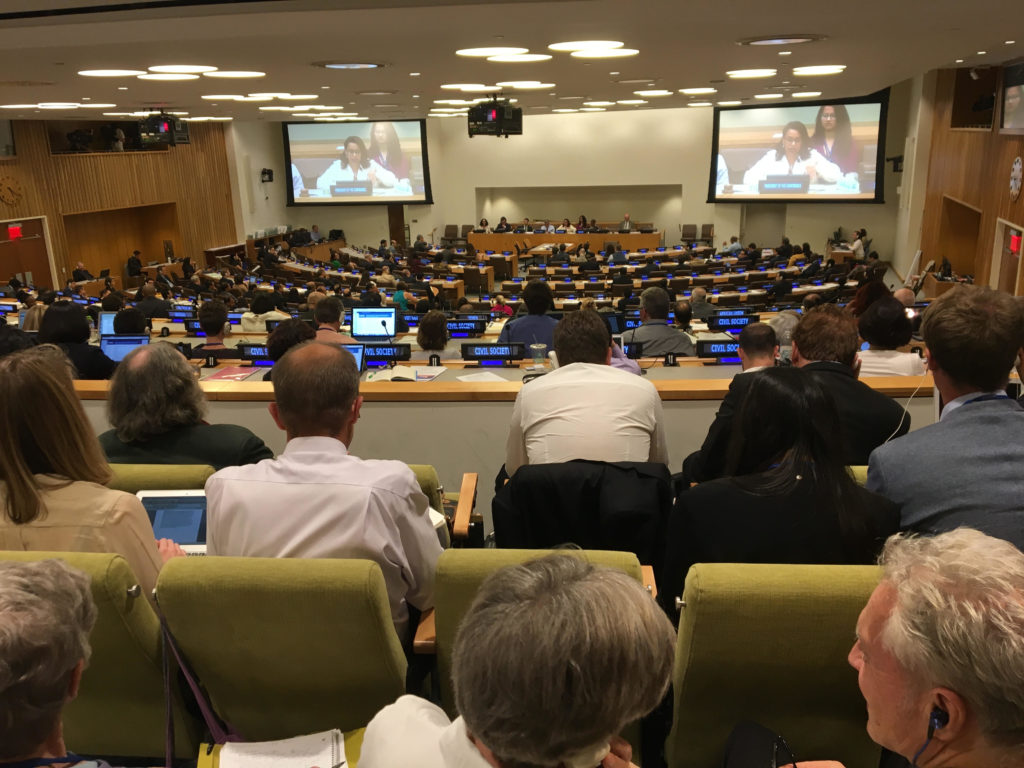 “Each of the Parties to the Treaty undertakes to pursue negotiations in good faith on effective measures relating to cessation of the nuclear arms race at an early date and to nuclear disarmament, and on a Treaty on general and complete disarmament under strict and effective international control.”

I have attended all NPT conferences in New York since 2000 – all marked by intense conflict between abolitionists versus those believing the powerful few must possess a “nuclear deterrent” to keep the world safe.

The Ban Treaty arose from decades of frustration, demoralization and urgency resulting from the failure of nuclear weapons states to meet their Article 6 commitment.

We have reduced the number of nuclear weapons from 65,000 in 1986 to about 15,000. Nuclear possessors have extensive modernization plans. Detonation could occur by accident, miscalculation or escalation, causing unimaginable suffering and environmental devastation including nuclear winter and famine. This arouses fear and moral outrage among the nuclear have-nots and all publics. Possessors miss the fact that power asymmetry, nuclear inequity, is unsustainable with no endgame, no path to resolution. 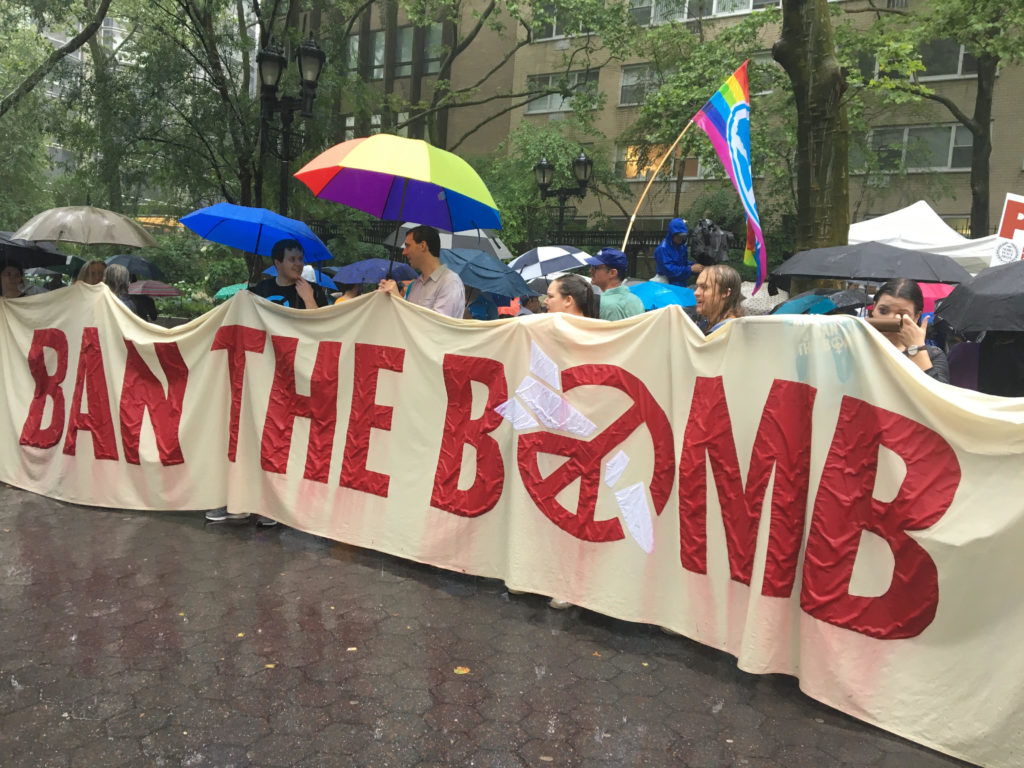 The Nonproliferation Treaty is actually truth in advertising. It seems the nuke states never intended to disarm, as promised. Nonproliferation means we keep our nukes. You don’t get yours. Our nukes are good. Our allies’ nukes are good. Your nukes are bad. We can have nukes because we are responsible. You can’t.  We need our nukes to deter you to keep us safe, but it is unacceptable for weaker states to deter us when they feel threatened.  This asymmetry is unsustainable.

The Humanitarian Initiative – Paving the Way to the Ban Treaty

A recent intervention is the Humanitarian Consequences Initiative. It reframed the debate on the horrors of nukes with three major international UN conferences, all boycotted by the nuclear weapons states. This made a tremendous impact, leading to the ban treaty negotiations, mandated by the more democratic General Assembly.

What’s TRANSCEND Got to Do with It?

Both sides have a legitimate goal of security from nuclear and conventional threats. Abolitionists focus on eliminating nukes – the symptom. Nonproliferators insist on the necessity of deterrence. Neither addresses the underlying conflict. Deterrence theory is challenged if they recognize that North Korea and others will inevitably insist their own deterrent, and if we can educate about spiral theory. We can bridge the legitimate goals for safety with “cheaper deeper security,” including tension reduction, reassurance, satisfying basic human needs, legitimate goals, just grievances and creative conflict transformation.

Money and empire are illegitimate goals. The military industrial congressional media complex infrastructure drives policy by manipulating fear and exaggerating threats. The legitimate goal of profit can be addressed by conversion to life enhancing endeavors that create more jobs – environment, infrastructure, health, climate chaos, but will be resisted. The Ban Treaty opens opportunities for international divestment. Check out HERE.

Johan Galtung has written extensively about empire and the ability to dominate. Recognition that asymmetrical power backfires with the law of opposites is putting cracks in the system. A campaign of demystification is necessary and mobilization of civil society. 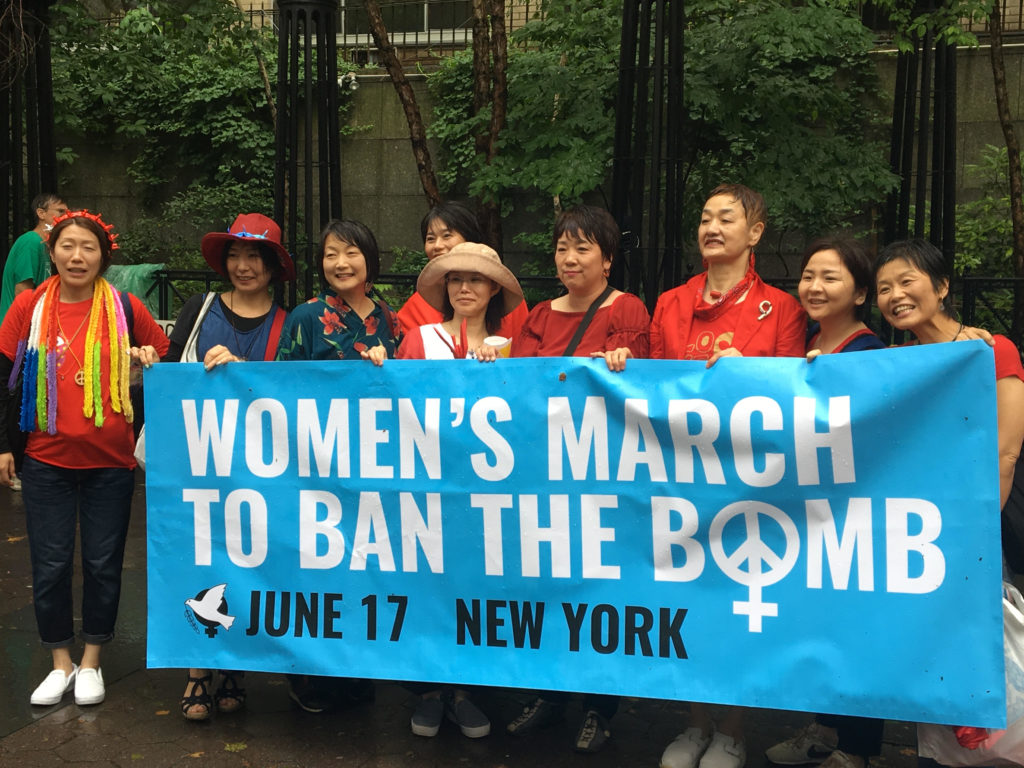 The escalating nuclear threat is at a height we have not seen since the Cuban Missile Crisis, but with leaders far more pathological. It is a teachable moment if we can survive it. Concrete, black-and-white thinking-believing in increasing pressure lack empathy and fail to understand the role of fear, provocation, and cause and effect. And ultimately the causes of war itself.

The Ban Treaty reflects and creates a shift in collective consciousness and norms, delegitimizing nuclear weapons. Recognizing desires of two-thirds states parties and a majority of humanity, it shifts the burden of proof to possessors. This can inspire more engagement in the movement that has all but disappeared since one million people marched for a nuclear freeze Central Park in New York in 1982.  The hard work begins now, and the TRANSCEND community has a specific and necessary contribution to make.

Diane Perlman, Ph.D. is a member of the TRANSCEND Network for Peace, Development and Environment and a Visiting Scholar, George Mason University School for Conflict Analysis and Resolution. dianeperlman@gmail.com. www.consciouspolitics.org

Anticopyright: Editorials and articles originated on TMS may be freely reprinted, disseminated, translated and used as background material, provided an acknowledgement and link to the source, TMS: Transcending Nukes, is included. Thank you.