The Psychology of Splitting, Traumatizing, and Abusing Families

Mental health professionals are gravely concerned about the known effects of the cruel and inhumane policy of tearing children away from their parents who have made extraordinary sacrifices to protect them. We are horrified as we helplessly witness our government inflicting psychological damage upon vulnerable people. Forced separations are a form of child abuse, psychological torture, reckless endangerment, reckless indifference, cruel and unusual punishment, and a crime against humanity. This catastrophic policy, doing great harm and no good, qualifies as “political malpractice.”

We are shocked by Chief of Staff John Kelly’s callous response to NPR’s John Burnett who asked whether it is “cruel and heartless to take a mother away from her children.” Kelly said, “The children will be taken care of — put into foster care or whatever. But the big point is they elected to come illegally into the United States and this is a technique that no one hopes will be used extensively or for very long.” And we are appalled by Attorney General Jeff Sessions suggestion that God ordains them to follow these diabolical policies of splitting families. 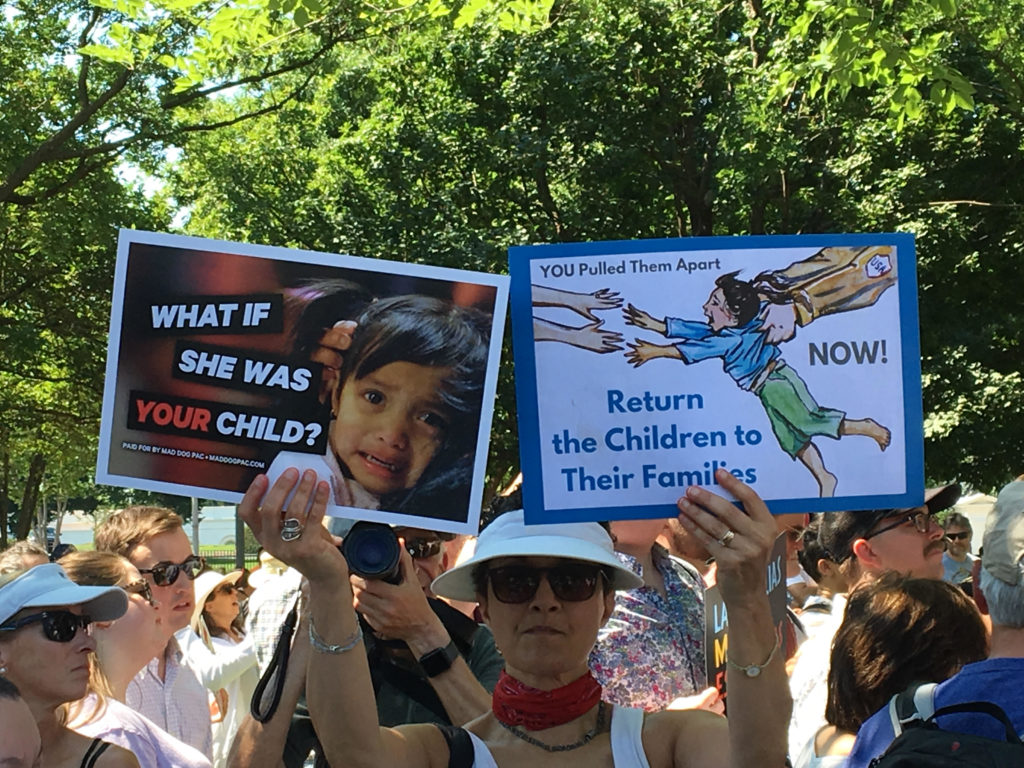 These comments show a profound lack of empathy, psychological ignorance, and impaired feeling function. This is akin to antisocial behavior, denying the basic humanity of others. These pathogenic policies of using people as political pawns to deter others are directed by mean-spirited officials who lack “Emotional Intelligence” (Daniel Goleman), as these policies are even counterproductive.

There is a consensus among therapists, researchers, academics, practitioners, and expert witnesses who study and treat individuals of all ages, families, groups and organizations, across ethnicities and cultures about the savagery of these mindless, punitive policies. We have worked with and studied adults who have suffered throughout life from harm done by early childhood separations and trauma. These unwise policies are creating a crisis in public health and social justice. 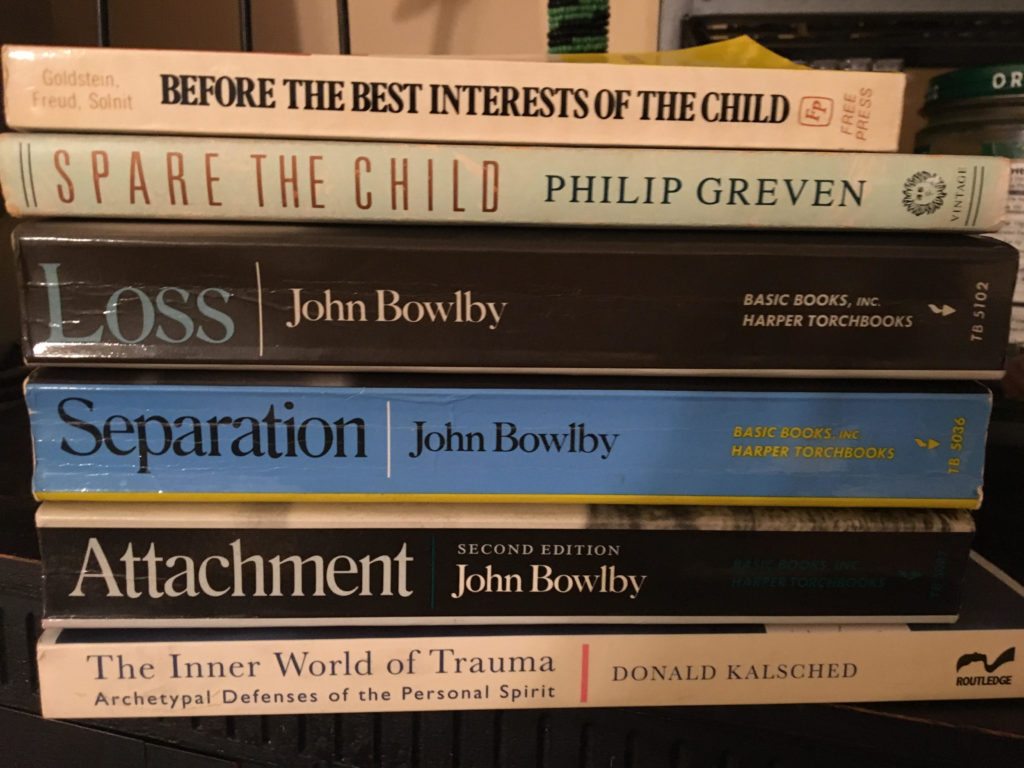 It is urgent beyond measure to reunite these families immediately as harm deepens with every passing day. Young children do not have a concept of time or sense of permanence. For them the present is an eternity. Children go through stages of intense protest, followed by despair, and detachment. Effects of separation are magnified by being in strange surroundings, including unfamiliar food, language, smells and sounds while being deprived of comfort. 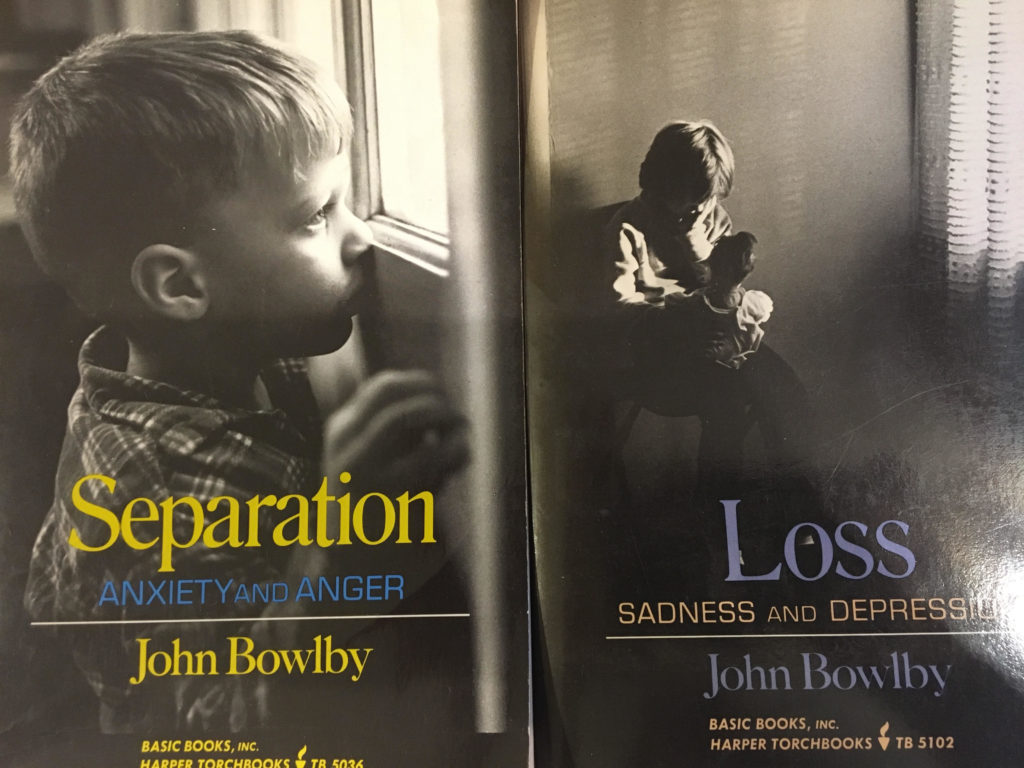 Parents experience intolerable agony compounded by not knowing where their children are, how they are, or if and when they will see them again. Reunions after such separations are beset with a host of difficulties in rebuilding primary bonds.

Psychological impacts include the following:

* Erosion of Basic Trust.  According to psychologist Erik Erikson developing an early sense of basic trust, the sense that the world is predictable and trustworthy, is the most important building block in one’s development. These separations undermine parents’ ability to fulfill their most important function, providing a foundation in trust for healthy development.

* Attachment Disorders. Extensive research highlights the critical importance of a secure attachment pattern to become a well-functioning adult who can contribute to society.  Disruptions to secure attachment can cause lifelong suffering and impairments with negative consequences to society. 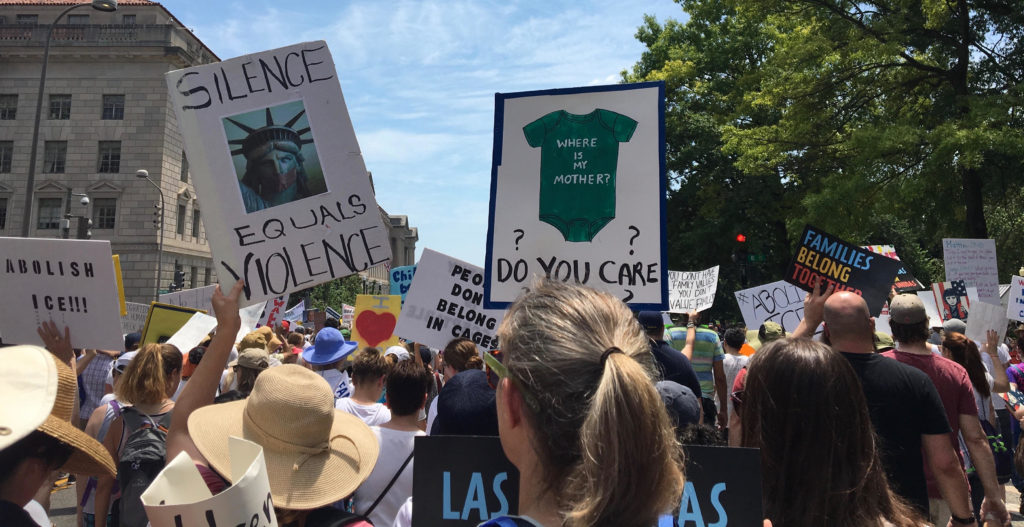 * Retraumatization. For those who fled from danger and oppression, took risks, made treacherous journeys across borders and continents with children, left loved ones and their culture to reach safety to protect their children, this is a retraumatization which is more devastating. People are deprived of the comfort from their closest bonds we naturally seek in the face of any trauma. Shockingly, some follow a policy of no hugging in which staff cannot comfort screaming children, and even forbidding a brother and sister to hug after being taken from their parents.

* Generational Transmission of Trauma. Effects of trauma tend to be passed down to future generations. It will affect the future parenting style of these children and the trauma will reverberate through future generations. The severity of the impact can be mitigated with safety, intensive, high quality therapy, other healing and corrective life experiences and a good support system.

* Vicarious Trauma. The phenomenon of “Vicarious Traumatization” refers to the effects experienced by counselors and others who witness the suffering, fear, trauma and all harm done to others as we watch these heart-wrenching separations in horror. We feel helpless and ashamed for the actions of our government.

* Perpetration Induced Traumatic Stress (PITS). PITS, observed and coined by Rachel MacNair, PhD past president of The Society for the Study of Peace, Conflict and Violence, refers to the traumatic effects on the perpetrators who are following orders to commit these cruel acts, including the law enforcement officers hearing peoples’ screams as they carry out their inhumane orders.

* Societal Consequences. Those escaping danger, fear, and poverty, who would likely become grateful, loyal, and patriotic residents and contributing members of society, are betrayed. Justifying these cruel policies fuels mean-spirited elements of our culture that dehumanize immigrants and create a social norm in which it is acceptable to punish and traumatize innocent people because “the law is the law,” it’s their fault for coming, and that it is legitimate to harm people to deter others.

* Unconscious Historical Legacy. Separating children from families has been a dark part of American history beginning with genocide of Native Americans, abduction of Africans for use as our slaves who were raped and separated from their children and families, to the internment of Japanese Americans concentration camps after Pearl Harbor, refusing asylum and turning away Jewish refugees from the Holocaust, condemning them to death, and deporting beloved family members even under Obama. 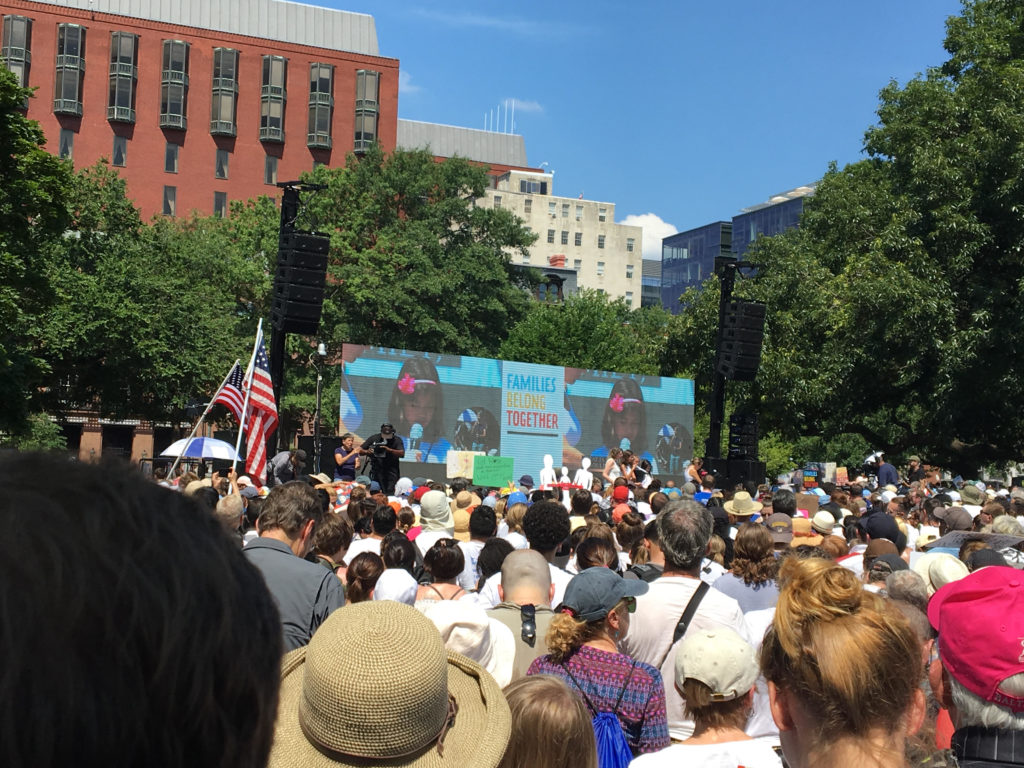 12 year old Leah, tearfully, eloquently addressing the DC rally about living in constant fear that her loving mother, working as a nanny, who taught her to speak up, will be deported.

Maya Angelou said, “History, despite its wrenching pain, cannot be unlived, but if faced with courage, need not be lived again.”

* Punimania is a diagnostic term coined by me (Diane Perlman). This compulsion to punish is pathological and deserves a diagnosis. Punimania refers to the mindless pathological compulsion to punish when the punishment (1) does not address the true cause of the problem, (2) does not correct the problem, (3) causes suffering of innocent people over time and space, and the punisher as well, and (4) causes harm to the fabric and collective psyche of society. 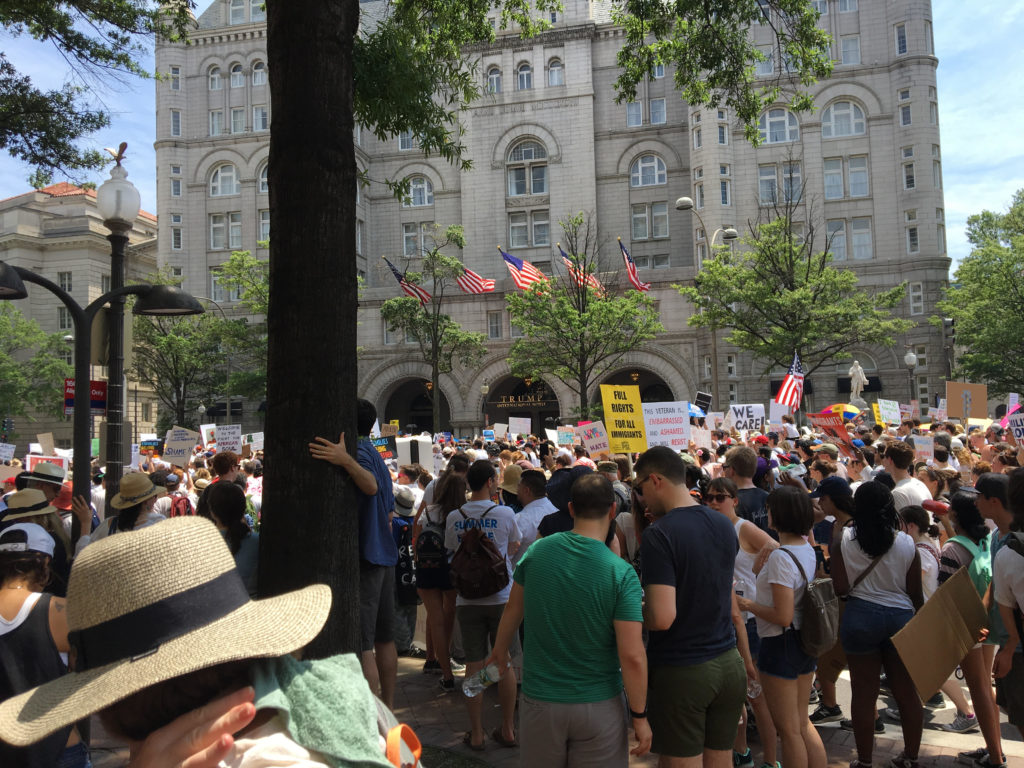 35,000 marchers in DC pass Trump Towers on the way from the White House to the Department of Justice, chanting “Shame, Shame, Shame!”

* Our Obligation to treat to heal. Although these divided families are deeply scarred by this trauma, studies of trauma survivors show that appropriate, effective treatments, including techniques of detraumatization by qualified, compassionate, ethical professionals can help reduce the severity of lifelong symptoms and consequence, thus reducing the intergenerational transmission of trauma.

We urge immediate reunification of families and the provision of safety, stability, and basic human needs. In addition to individual, family, and group therapy, collective healing will be supported by public recognition of this trauma, bearing witness, apology, some form of restitution, emotional support and engagement in community life, and a variation of “truth and reconciliation” processes.

30 years ago, when George H. W. Bush accepted the presidential nomination he called upon us to become a “kinder, gentler nation.” For all of our sake, let us take heed.

Diane Perlman, Ph.D. is a member of the TRANSCEND Network for Peace, Development and Environment, a clinical and political psychologist, former chair of Psychologists for Social Responsibility’s Task Force on Global Violence and Security, and a Visiting Scholar, George Mason University School for Conflict Analysis and Resolution. Diane is also a founding member of the Transcending Trauma Project, a former nursery school teacher, and a mother and grandmother. dianeperlman@gmail.com. www.consciouspolitics.org

Anticopyright: Editorials and articles originated on TMS may be freely reprinted, disseminated, translated and used as background material, provided an acknowledgement and link to the source, TMS: The Psychology of Splitting, Traumatizing, and Abusing Families, is included. Thank you.