Towards a Model of Wise Power™: Quantum Politics and Second Order Change

Once again, much of the world is gripped by a compelling narrative portraying a simplistic, archetypal drama. It fits Galtung’s DMA model – Dualism, Manicheism, Armageddon –, nuclear threat included.

“It is a simple Hollywood script:  Ukraine is the angel, Russia is the devil, Zelensky is the hero and all good people will wear blue and yellow ribbons.” (All Things Russian are Being Punished” Fueling the Propaganda War)

TRANSCEND Media Service and alternative media offer complex, historical, solution-oriented, relational perspectives that understand cause and effect, urging negotiations for an agreement accounting for all parties needs to end violence.

I have been immersed in the world’s leading think tanks since 2003, co-taught a course on think tanks, and had brilliant international relations and foreign policy students live with me, deeply trained in power politics.

The best game in town is “smart power,” considered a leap beyond hard and soft power, combining carrots and sticks (how you treat a donkey), reward and punishment, still coercive and humiliating in its way.

Programs churn out “experts,” politicians and pundits who promote policies grounded in Newtonian Politics and First Order Change, described below. We daily suffer from consequences of the dominant consensus mindset.

Schools and institutions receive virtually no input or context from the field of conflict transformation. It is entirely unknown to most, or misunderstood as naïve or ineffective. When I present a transcendent perspective, people are curious, interested and open. We are absent where needed most.

It might help to frame a model of Wise Power™ – akin to the TRANSCEND Method-UN Manual, beyond hard, soft and smart power. Two theories frame the debate.

I am not a physicist. I use this isomorphically as a principle of reality. This model can apply to medicine – allopathic, symptom oriented vs. regenerative, functional, naturopathic, biological repair, and other domains.

Light has characteristics of both particles and waves, known as the “dual nature of light.”  In some experiments light behaves as a particle, called a photon, that travels in straight lines, measuring position. In others light behaves as a wave, which can bend, and has momentum.

Hence, the “Observer Effect.” How we set up the experiment determines how light shows up. We cannot observe phenomena without accounting for our impact. We can influence whether conflicts and enemies behave as static or dynamic. Our approach impacts outcome.

We cannot simultaneously focus on both aspects. Interestingly, “the more carefully one tries to measure position, the more disruption there is to the system, resulting in changes in momentum.” If we focus on us/them, good/evil, we disrupt the system and alter momentum. If we reduce tensions, increase options, we can disrupt the concretization. Focus on aspect one disrupts the other. 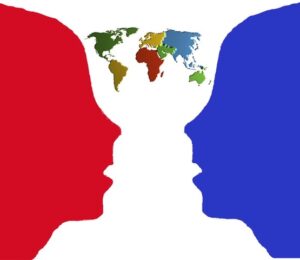 HUP Applies to Energy and Time

One cannot measure the precise energy of a system in a finite amount of time. We cannot understand war dynamics in a finite window of months, ignoring decades of insults, rebuffed peace initiatives, rejections, broken promises, betrayals, unrelenting threats, humiliations, and deliberate provocations causing exasperation, hopelessness, with no way out, driving the inevitable last resort.

‘If you are going to humiliate someone publicly in a really crass manner, make sure that he doesn’t survive to take his inevitable revenge.”
– Michael Brenner, On Humiliation

A synchronistic example is the “slap heard around the world.” Chris Rock publicly humiliated Will Smith, putting him in an excruciating dilemma of doing nothing or responding.

Perhaps humiliation turns a wave into a particle, hardening something dynamic, foreclosing possibilities. One need not minimize Hitler’s evilness to recognize that the punitive, draconian humiliation of the Versailles treaty laid fertile ground for exploitation. Or bin Laden’s actions attributed to 80 years of humiliation.

People are more dangerous when afraid. They may regress to primitive levels of functioning and lose higher level cognitive functions, from abstract to concrete, black-and-white thinking, collapsing from wave to particle.

Conscious of the Observer Effect, we can intentionally produce desired results, influencing whether adversaries show up as static or dynamic. Actions, rhetoric and strategies increase or reduce tensions. Focusing on positions, we sacrifice energy, dynamics and possibilities. There is a trade-off. Different laws govern each realm (Newtonian/Quantum)

Entanglement: “Occurs when two or more objects are connected in such a way that they can be thought of as a single system, even if they are very far apart…. information about one object automatically tells you something about the other and vice versa.”

The USA and the USSR/Russia have co-evolved, intensely reacting to each other, identifying in opposition to each other. We are deep in each other’s psyches.

The USA, emerged triumphantly from the Cold War while Russia, and Putin, experienced defeat and humiliation. Still, Putin requested to join NATO for peace and was rebuffed. Ukraine is a symbol, and proxy, embedded with meaning and emotions. (See Oliver Stone’s 2016 Ukraine on Fire,  banned on platforms.)

We cannot judge our adversary’s behavior independently from our effect on them. With asymmetrical power, the dominant party is in a stronger position to change dynamics for better or worse.

“The madness that is carrying the world closer and closer to nuclear war has at its core a psychological explanation: Each side, though fundamentally afraid, misperceives the nature of the danger it faces. Each side imagines that it faces an inherently, implacably aggressive enemy, when it actually faces an enemy as fearful as itself – an enemy driven mainly by fear, to do the things that lead to war.”
— Ralph K. White, Fearful Warriors.

Security assurances, recognition, and satisfying vital human needs, reduce fear and violence. The way to be secure is to make your enemy more secure.

1OC – is focused on symptoms, using superficial, concrete, black-and-white thinking. The powerful often use coercive policies including deterrence, sanctions, maximum pressure, punishment, isolation, threats, military actions and so on. These provoke fear, anger, moral outrage, and escalatory asymmetric responses like resistance, increased group identification, and warfare of the weak, according to the law of opposites.

1OC can be a band aid, may prevent some violence and uncontrolled nuclear proliferation, or stop bleeding. It does not correct underlying causes. There is no endgame. It cannot produce enduring security or stability. Fragility of these measures is threatened by crises, conflict, vested interests, bad faith, misperception, lack of communication, exaggerated threats, fear and changes in leadership.

“We cannot solve our problems with the same thinking we used when we created them.“  — Albert Einstein

2OC Second Order Change addresses the causal relationship system rather than the symptoms.

“Upon this gifted age in its dark hour,
Falls from the sky a meteoric shower
Of facts … they lie unquestioned, uncombined.
Wisdom enough to leech us of our ill
Is daily spun; but there exists no loom
To weave it into fabric.”
— Edna St. Vincent Millay

Anticopyright: Editorials and articles originated on TMS may be freely reprinted, disseminated, translated and used as background material, provided an acknowledgement and link to the source, TMS: Towards a Model of Wise Power™: Quantum Politics and Second Order Change, is included. Thank you.

One Response to “Towards a Model of Wise Power™: Quantum Politics and Second Order Change”